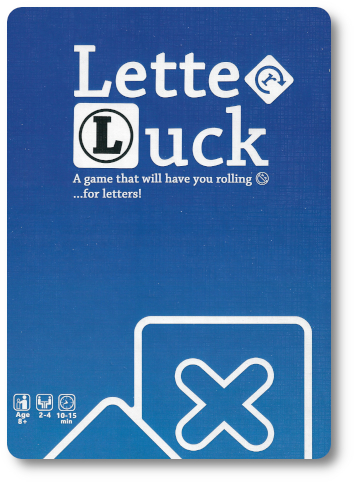 American magazine columnist, author, lecturer, and playwright, Marilyn vos Savant said: “When our spelling is perfect, it’s invisible. But when it’s flawed, it prompts strong negative associations.” In this game, your spelling, no matter how perfect, will be limited to what random rolls of the dice provide. If you feel lucky and have the vocabulary to back it up, sit down, roll the dice, and guess a word or two.

Letter Luck, to be published by Colivera Games, will reportedly be comprised of six custom six-sided dice, a Write-in pad (with many sheets), and 54 Word cards. As this is a review of a prepublished game, I cannot comment on the final game’s component quality. However, the copy of the game we were provided was simply excellent, with high-quality components and well-drafted rules. Not included with the game and necessary to play is a pen or pencil per player.

Getting Ready to Spell

To set up the game, first give each player one sheet each from the Write-in pad and a pen or pencil.

Second, shuffle the Word cards and deal one to each player, face-down. Players should look at their Word cards but keep them hidden. Each Word card contains a list of words. The first three words in the list are always five letters long. Players now select one of these three words to be their first word to be guessed. Each player writes their selected word in the “Game #1” “Player’s Word” line now, making certain no other opponents see what they write. Players keep their Word cards for the duration of the game. 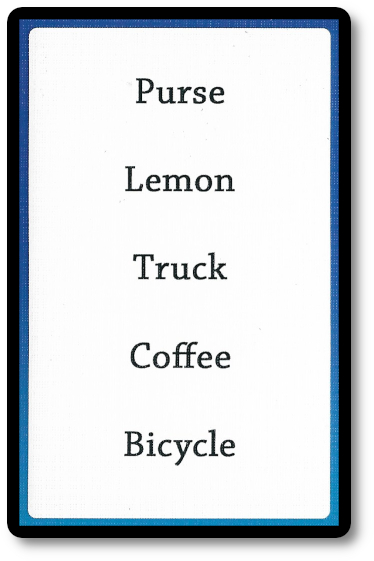 That’s it for game set up. Determine who will go first and give them three dice.

Letter Luck is played in games and turns, with no limits on the number of turns per game. A player’s turn is summarized here.

Step One: Roll the Dice

The player rolls three dice to the table. The dice in Letter luck are six-sided. Each side has a defined action.

The possible actions to be rolled per die are as follows:

If the player elects to take the “Wild” action as a “no action,” then the no-action resolution is applied to an opponent of their choice!

If a player rolls certain combos, they get bonus actions to resolve. These include the following:

When guessing a consonant, vowel, or word, the answer is always a “Yes” or a “No” response to the question. No additional explanation is needed or expected.

Based on the “yes” and “no” response from the player’s opponent, they now update their Write-in sheet. A special space is provided to cross out letters that do not exist in the opponent’s word, as well as a space to start putting the letters together to form the opponent’s word. 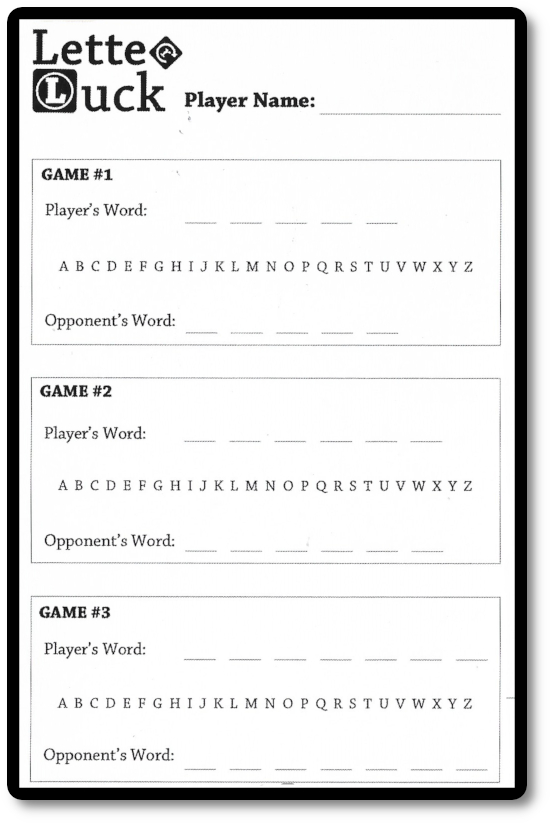 Once the player feels like they know their opponent’s word, they can name it, but only if the dice values rolled allow it. If the player is correct, they win the game! If they guess incorrectly, the game continues.

A single game of Letter Luck is complete when a player guesses any opponent’s word correctly. If the players like, they can continue starting with Game 2, Game 3, and so on until they complete all the games. Each time a new game is started, the players select a new word from their Word card.

Letter Luck works best with two players, but you can easily fit a third and fourth player with a few changes to the rules. Instead of going through several games, only one is played. If an opponent guesses the player’s word, the player is out of the game. The winner is the last player still in the game who did not have their word guessed.

To learn more about Letter Luck, visit the game’s website or visit the Kickstarter campaign.

The Child Geeks had fun with Letter Luck, finding the dice rolls to help with decision making and the process of discovery to be engaging. According to one Child Geek, “This is just like Hangman that I play at school, but no stick figures are hurt in the process. I liked it, and the words were tricky enough to keep you guessing but not hard enough to keep you from getting it.” Another Child Geek said, “Fun game. It really helps if you are older. My sister – who is younger than me – just guessed letters, and she had all the letters but didn’t know how to spell the word.” This Child Geek makes a great point. While guessing the word is everyone’s challenge, it’s significantly less challenging to those with a large vocabulary and excellent spelling skills. Regardless of individual Child Geek spelling prowess, all of them voted to approve Letter Luck.

The Parent Geeks found the game appealing to play with their children but didn’t care for the game with their peers. According to one Parent Geek, “I really enjoyed the game and found a lot of value in it both from an entertainment and education perspective—great stuff for my kids and me to practice their vocab. As a game with adults, however, I didn’t really care for it. Even when I know the word, rolling dice and being stuck with the dice results felt too restrictive. Still, the kids liked it.” Another Parent Geek said, “Fast and fun. Easy to teach and easy to play. I loved it with my kids but was bored when I played it with adults. This is definitely a family or kids game. I could see it being trendy in schools and summer camps.” When all the votes were in, the Parent Geeks gave Letter Luck a mixed reviewing, citing that it worked great with the kids, but didn’t spell “awesome” with the adults.

The Gamer Geeks were bored from the start. According to one Gamer Geek, “The game is all about me rolling dice, being held hostage by the dice, and guessing what is obvious with limitations – again – set by the dice. No thanks. Hangman is less restrictive and more challenging.” Another Gamer Geek said, “A solid game for kids. Let me write that again. For. Kids. This is not a game I can really see an adult getting into and certainly not a gamer.” Apparently, some of the Gamer Geeks tried adding drinking-game elements to the dice rolls. Examples provided where, “every time you guess wrong, you take a shot.” This did not make the game anymore appealing, however. When all the votes were in, the Gamer Geeks spelled “nope,” resulting in the game being rejected by our gaming elitists.

Letter Luck is going to be a fun game for the family at the family table. It will challenge young minds and young readers alike, but older and more veteran lovers of the written word will find the game too random to empower their word-guessing skills fully. As it turns out, the dice are exceptionally helpful to our Child Geeks (giving them order and direction) but highly limiting to anyone who wants to explore what the mystery word is based on what they know. To put it another way, imagine that all you have to do is pick up a rock. You know the size of the rock and how many hands you need to move it. But you can’t until the roll of the dice says you can. Frustrating.

Only very, very rarely did a player roll their eyes and sigh in frustration of a turn being wasted on – literally – the roll of the dice. Still, it happens, and as the players get closer to knowing what they need to win, the dice start to hinder rather than empower.

If you enjoy word games and are looking for engaging ways to teach your children new words, strengthen their vocabulary, and play a game while doing both, do look into playing Letter Luck at your family table when the opportunity allows. I hope it spells “win” for you and yours.