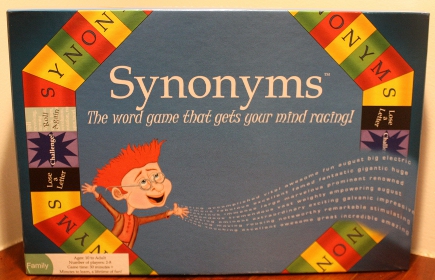 In Synonyms: “the word game that gets your mind racing”, your goal as a player is to be the first to collect letters from around the board that spell out the word “synonyms”. This is done by rolling a single six-sided die and advancing around the board in a clockwise fashion. The die value rolled represents the number of spaces the player can move around the board and the number of synonyms that must be named correctly. This makes a player’s roll something of a punch in the teeth if they roll a “6″. The game also comes with two 60-second timers, a score pad, and a pencil.

The board itself is comprised of four different space types. The first and most prevalent are what I will call the “synonym spaces”, for lack of a better term. These are letter spaces that contain one of the letters that spell the word “synonyms”. In addition, synonym spaces are colored (green, yellow, or red) which determines the difficulty level of the word that must be used. Green is the easiest, yellow is moderately difficult, and red is the de facto “really, really hard”.

The colors on the board match a deck of word cards. The front of the card lists the word the player must name synonyms for. On the back of the card are a number of synonyms for the word being used. These words should not be seen as the only ones that are correct. If the player says a synonym for the word being used that is not on the card, it is counted as long as it really is a synonym. Majority rules if there is ever any doubt.

The other three spaces on the board are Loose a Letter, Challenge, and Roll Again.

The Loose a Letter space does exactly that; it causes the player who lands on it to loose a letter. The letter lost is up to the player. This is an unfortunate game design decision because it actually makes the game longer and not more entertaining or challenging.

The Challenge space allows a player to earn extra Challenge Cards. This is done by the other players choosing a synonym card. Successfully completing the challenge awards the player with an additional Challenge Card and an inflated sense of self worth.

The Roll Again space allows the player to roll the dice again and keep moving around the board. Again, not a necessary mechanic for the game, but put in perhaps to shakes things up a bit much like the Loose a Letter space.

There are also two sets of player cards in the game. These are Challenge Cards and Pass Cards. Challenge Cards allow some player vs. player action during the game. This helps break up the monotony of the “roll-move-react” mechanic that is prevalent in the game play. If a player chooses to challenge another, they are essentially battling for the letter on the board. This is done by the two players going back and forth until one of them is unable to name a synonym.

The Pass Card allows the player to either roll again or choose another word they must name synonyms for.

Game play is simple. Roll the dice and move that many spots. If it is a synonym space, the card color that matches the space color is selected, the time started, and the player must name a number of synonyms for the word on the card. The total number of synonyms must be equal to the dice value rolled. If they win, they get the letter. If they don’t, the next player goes. This continues until a player has collected all the letters in the word “synonyms”.

This game allows and provides rules for group play. The rules are the same except the groups work together as a team. This makes the game immediately accessible to younger players because adults and older brothers and sisters can lend a hand.

Synonyms is like a lot of other word games you see out in the market these days. They use the English language to drive the game forward but the game itself seems almost like a secondary concern. This does not make Synonyms a bad game, but the game itself would have been much more interesting and fun if there were some ground breaking or even clever mechanics built into the game play.

This game is going to cause even adults to scratch their heads. Expect problems for the younger little geeks in the family and anyone in the family who (1) does not speak English as their primary language or (2) does not have an extensive vocabulary. Because of this, the game is automatically unbalanced. The only way to correct this is to play the game in teams and divide the teams up so the strengths and weaknesses of all groups are equal. After that, it’s just a matter of not slipping into a funk of analysis paralysis (i.e. “vapor lock”) when pulling words out of the air within the time limit. Believe me when I say it’s much more difficult then it sounds, but groups will be able to work off each other’s words making the game go faster. After all, a synonym of a synonym tends to be correct.

If you play this without teams and with younger players, it is highly suggested you use the word decks based of the player’s ability and not the random color the player’s piece lands on. For example, if an adult is playing with a 10 year-old, the 10 year-old should only use the easy word deck (green) while the adult should only use the hard word deck (red). Using this type of handicapping will help even out the difficulty somewhat. This isn’t letting your child win, mind you, but it does allow for a more challenging and rewarding experience without watering the game down.

If you like crossword puzzles, word games, and activities that will make you really think, then Synonyms is for you. There are much better word games available to you, however. Train of Thought, for example. What Synonyms has that other words games do not is the extensive and all inclusive use of just synonyms. Other than that, the game doesn’t have anything that would make it shine brighter than all the other word games available to you. It is because of this, I give this game a solid “meh”. It had promise based on its premise, but just doesn’t deliver a rewarding gaming experience for me or my little geeks.

Designing games is hard work, people. Designing great games is even harder. We wish the game designers, Linda Hymes and Derek Gaffney, the very best of luck and look forward to their next project which we are certain will greatly benefit from their previous game design experience.