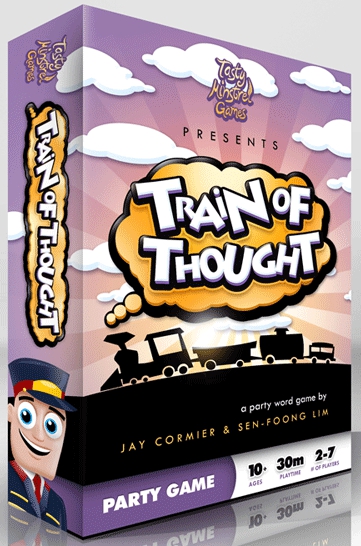 Train of Thought is a party word game that will challenge and entertain. This game is not for the dull or slow. Train of Thought requires you to be engaged and listen attentively during the entire game.  At the same time, this game is not overpowering or overwhelming and is easily taught within about 2 minutes.

The game is comprised of two types of cards. The single Conductor Card and the Station Cards. The Conductor Card is used to signify which player is leading and is passed from player to player during the game. A Station Card have 6 words printed on it, with a value of 1 through 6 next to each word. Also included in the game is an easy to read and understand rule book, a 60-second timer, and a single six-sided die.

Players are either Guessers or the Conductor. Regardless of the player’s role, there are points to be won. This is an excellent mechanic as it keeps all the players active and involved. There is no downtime. Once the game starts, everyone at the table is simultaneously playing for points.

The goal of the game is to get the Guessers to correctly name as many destination words as possible within an allotted amount of time. Doing so wins a point for the Guesser and the Conductor. It is therefore in the Conductor’s best interest to be as precise and clear as possible. It is also in the Guesser’s best interest to pay close attention and do all they can to guess the destination word first.

One of the Guesser’s takes on the role of the Breakman for a single turn. The Breakman is in charge of turning over the timer and calling “time” when it runs out.  The Brakeman is still very much in the game and should participate in the guessing.

When the Conductor says go, the Breakman turns over the timer. The Conductor then provides the Guessers with a 3-word sentence or short phrase that will help the Guessers guess the destination word. Note that the 3-word sentence or short phrase must contain the start word and cannot contain the destination word.

The Conductor continues to draw new Station Cards and providing new destination words for as long as there is time on the 60-second timer. Once the Breakman shouts “time”, the Conductor Card is passed to a new player, another Guesser becomes the Breakman, and a new turn begins.

Points are tracked by players taking one of the Station Cards that have been discarded or not used yet and set aside in a separate “scoring pile” in front of them. Train of Thought comes with 200 Station Cards, which means you will never be short cards to play with.

Play continues for 2 rounds, providing each player with 2 chances to be the Conductor.  After the second round, all players count the cards in their scoring pile. The winner is the player with the most cards and goes on to have a lucrative career in the locomotive industry or word franchise.

If you found my explanation too complex and confusing (shame on you), then give this video a quick peek. It is both amusing and educational.

I am not a fan of word games. I find most of them to be fairly unimaginative in their game design and repetitive to the point where it is painful to even participate. Lack of replay value, player interaction, and imagination often go hand-in-hand with word games, in my opinion. There are exceptions, of course. There are some very good word games available on the market today.

Train of Thought is one of those very good word games.

This game does a lot of things right. First, it provides for a high level of player interaction. I love games where I get to actually play with the other people. Second, it is fast-paced. There is no downtown and a single game doesn’t last very long or feel drawn out. Third, this game is challenging and requires all the players to use their active listening, communication, and logical thinking skills. This makes the game very challenging and rewarding. Fourth, and finally, the game’s mechanics and flow are easy to understand and to teach. This makes it very easy for me to introduce the game to veteran gamers and new players, alike.

This game is not for your littlest geeks. Reading and having a moderately large vocabulary is required to play. Your littlest geeks can still participate, however, but with assistance from the parents. If you play with your littlest geeks, put them on a team with another adult or older geek. This is how we played and it worked just fine. I also suggest you have a “practice round” to help everyone get in the mindset of how the game is played.

For those with older little geeks, the suggested age range is appropriate. Expect some words to be unknown to the Conductor. If this does happen, simply have the Conductor draw a new Station Card as quickly as possible and continue without penalty. The point of this game is to get your little geeks to strengthen their communication and logic skills. This game will do that with ease while not feeling like work.

Train of Thought is all about connecting the dots. As the game progresses, all the Guessers must do their best to follow the thread, or “train of thought”, that is being communicated by the Conductor. If the Guessers fail to do so, they will not follow the logic thread being cast by the Conductor, costing everyone points. Likewise, the Conductor must do all they can to keep the Guessers on the right track by adding small but important details that are connected. If everyone does this correctly, destination words are guessed fairly quickly.

I enjoy this game very much and get it on the table whenever I can. It is fast and challenging. I highly recommended it for your older little geeks and for adults. Great for parties or whenever you just want to have some fun!