Up the Water Spout Game Review 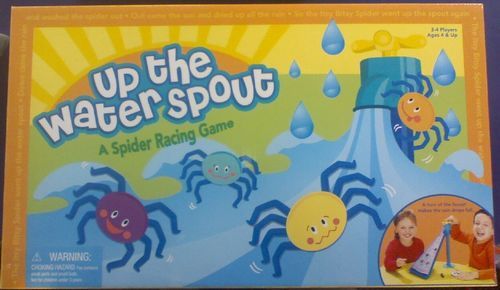 Each player has two spiders and the first player to get both spiders to the top of the water spout wins. The game board is a plastic ramp set with holes upon which your spiders will move, climbing up to the top. The ramp also has little ledges and angles kind of like the Plinko board from Price is Right. At the top there is a water spout. The water spout has marbles in it. Turning the handle on the water spout will let one of the marbles loose to fall down the ramp, bounce around the ledges, and knock your helpless spiders back to the beginning.

As spin-and-move games go, it could be worse. With two spiders, you actually have a choice to make on your turn: which one to move. That, and the fact that some spaces on the board are “safe”, protected by ledges so the marbles won’t hit them, adds a modicum of strategy that you normally don’t find in a spin-and-move. But the good news ends there.

Gimmicks in games are like the Force; they can be used for good or evil. Used for good, they can augment the gaming experience by evoking the theme or giving players a novel mechanism for resolving game events. Used for evil, they distract from the game, divide attention and frustrate players. The gimmick here, the titular water spout, is more evil than good. While the thematic relevance of the toy water spout is undeniable, it’s use as randomized “reset” mechanism is disappointing. Your spiders can get to within two spaces of the top (the top two spaces are safe) and get knocked all the way back to the beginning. Even by you, if you were the one who spun the water space. There’s nothing you can do to avoid it. That prolongs the game, and after the novelty of the water spout has worn off, it just isn’t fun.

I’m rejecting it based on the uninspired and frustrating game play. My oldest daughter hasn’t requested it since our first play. My youngest requests it sometimes, but she’s more interested in playing with it, than playing the actual game.

One final note I feel compelled to mention. For some reason, the rules never tell you how you get your spiders started on the spout to begin with. Do all the spiders start on the board? Do you start in some imaginary place behind the first space? Do you have to spin a specific number to get your spider started? Nothing in the rule book and no indicator on the board will tell you. It’s a rule you will have to make up, or you will never start a game, which is also a legitimate option.

It’s fun as a toy for four-year old children, but it’s only marginally passable as a game.

2 Responses to Up the Water Spout Game Review