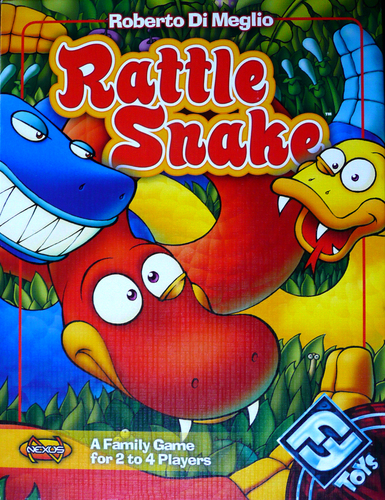 Rattlesnake is a simple game of placing surprisingly strong magnets, referred to as “rattlesnake eggs”, on a small game board that is covered with colorful snake illustrations. Where the egg is placed is up to the individual player, but they must place it on a specific colored snake. The snake they must place it on is determined by rolling a six-sided die that has an image of one of the five colored snakes (one of the snakes is on the die twice). The snakes shown on the die are the extremely deadly red, blue, green, yellow, and white (grey) rattlesnake. The object of the game is to be the first player to successfully place all of their rattlesnake eggs on the game board without attracting other eggs to it or falling off the board.

Game play is very straightforward. On a player’s turn, they roll the six-sided die and attempt to carefully place one of their eggs on a snake that matches the color rolled. The first round will be fairly easy, but keep in mind that the magnet “rattlesnake eggs’ are surprising powerful. The magnets already placed will move slightly even if another magnet is placed some distance away. This creates an immediate sense of tension that builds exponentially each time a magnet is placed on the board. Surprisingly, the extremely deadly rattlesnakes don’t mind one bit you are messing their eggs.  The deadly snakes have no interest in biting any fingers or ankles, either. In fact, they just look at the players, stupidly.

Placement of the eggs is the only thing the players need to worry about as the six-sided die determines what snake they must use.  If the player places the magnet and nothing happens, then that player’s turn is over and the next player takes their turn. Note that a player’s turn is not over until all of the magnets are no longer moving. This is very important as the magnets have a tendency to slowly come together at times.

The winner of the game is the player who successfully places their last magnet on the board without the magnets crashing together or falling off the game board and rolling away in hopes of escape.

Rattlesnake is a game that allows the younger and older geeks to come together and play as equals as the magnets are impartial to the extreme. In fact, when you play Rattlesnake, you might very well come to either love or hate the magnets. They have a tendency to act as if they have a mind of their own, moving of their own free will, no matter how much you beg or plead for them to stop moving. Many times over, I am absolutely certain that I hear them laughing at me.

My sons love this game, not only for the game play itself, but for the magnets. When they ask me to play this game I know I will get in about 2 games until they break away from the game board and simply play with the magnets. And that is completely fine because I still get to interact with them and we come up with new ways to have fun with the magnets.

On a personal note that is game specific, I hate those magnets. I hate them on the same level as I hate those sticky Jenga blocks. Their single goal and purpose of existing is to cause chaos and heartache. But I must also stress that this game is a lot of fun. I have played it with adults and kids, and adults with kids. Each and every time, everyone has a great experience. There is a good deal of  laughter, hand clapping, “OH NO’s!” and “WOOTs!” The comradery is always there even though it is a competitive game.

Because this game does not require anything other than a steady hand and the most basic of color matching skills, you will not have any problem playing Rattlesnake with kids as young as 2 years old. The game is simple, straight forward, and fast. This is the games greatest strength and weakness. Because the game is very simply, the older geeks will get rather tired of it quickly as the novelty wears off. Still, it is a great game to play as a “starter” game or a game filler.

For extra challenge and fun, you can always combine multiple copies of the game, placing the game boards together and have a massive Rattlesnake Battle Royal. I played this game with four game boards at once with 8  players and it was an absolute blast. I left the game feeling energized and slighted magnetized.