This Pleases the Trekkie in Me

I loved the original Star Trek like a hog loves mud and didn’t think I could love anything more until Star Trek: The Next Generation was released. Like the Grinch, my heart grew three sizes that day. We do not speak of Star Trek Voyager or Deep Space Nine in our household. They are dead to us.

I am now watching the newly released on streaming Netflix ALL of the Star Trek: The Next Generation and giggling with nostalgic pleasure. To make it even better, my two oldest boys love watching it with me, too! I’m afraid my wife is going to pull a muscle due to how many times she rolls her eyes when she hears us humming along to the theme music.

Because my little geeks were suddenly showing interest in Star Trek, I fished around the interweb for photos of the U.S.S. Enterprise to demonstrate how the ship has changed through the years. One of the many images that popped up, including the Star Trek spaceship and the aircraft carrier, was the following: 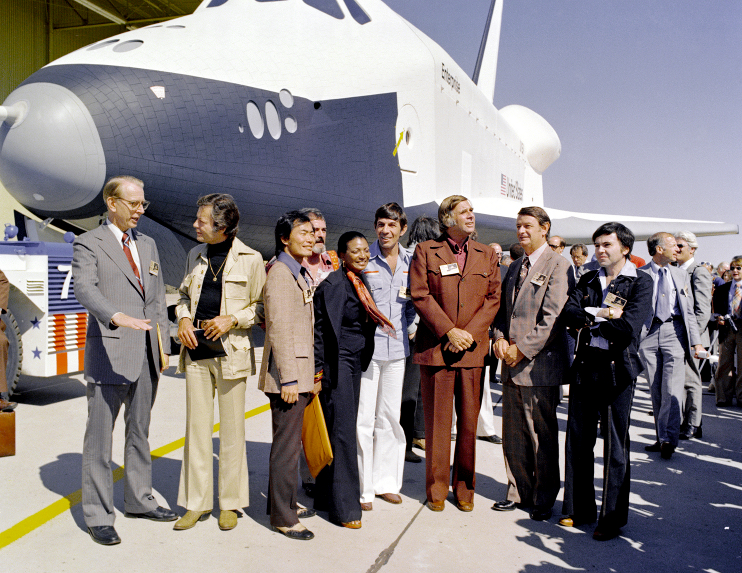 Mysteriously missing from the photo is William Shatner. I have been unable to find out why, sadly.

Two things really thrill me about the photo. First, Star Trek had become so popular and so ingrained in the American culture that a space shuttle was christened with the name of a science fiction spaceship from a television show. Second, check out those leisure suits, baby! Ooooh, my!