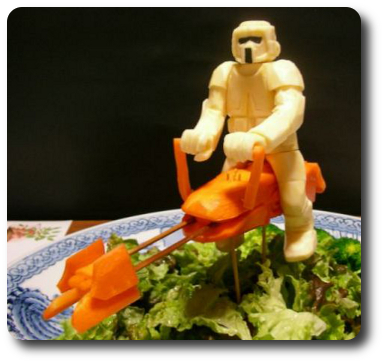 Star Wars is more than just a movie franchise. For some, it is a lifestyle. For others, it is their “go to” quoted movie to help break the ice at parties. For me, it’s an experience fraught with trials and tribulations. First off, Lucas took all my happy childhood memories I had from Episodes 4 though 6 and kicked them in the groin. How many “special editions” do we have now? Second, Episodes 1 through 3 were released which made the storylines in Episodes 4 through 6 make almost zero sense. Not that it matters, because you just know that Lucas will go back and redo those episodes by releasing a “super extra omega alpha special edition” where Han and Greedo are replaced with Jar-Jar Binks and a Wookie named Teddy! Gaaaaarrrrrgggggh!

There is a very positive side to Star Wars, however. Probably the biggest positive is its continued interest despite being a movie franchise that started in 1977. So many people know about Star Wars that you see the movie’s influences in many different ways. Literature, songs, art, and now food.

A Japanese sushi chef has turned his creative focus to create iconic Star Wars figures out of food and then serving them to be eaten. Although, I honestly don’t know how you could eat such exquisitely geeky foodstuffs. I mean, just look at this! It makes me cry manly geeky tears of joy…

While there is zero chance I will ever come to peace with the way Lucas has creatively and systematically ruined my childhood and relationship with Luke and the Gang, I can take comfort in knowing that the spirit (or “Force”, if you will) of Star Wars lives on and continues to grow. It makes me feel good to be able to share my passion for Star Wars with my little geeks and have them recognize characters, movie scenes, and obscure Star Wars pop-culture references wherever we go.