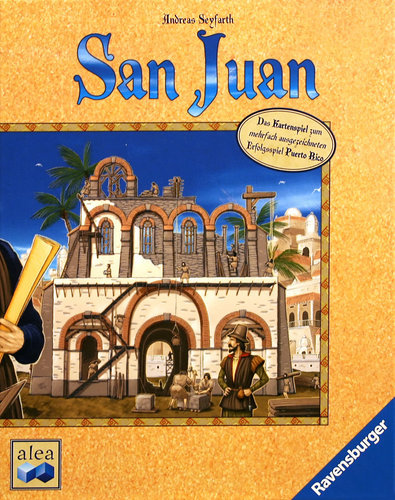 San Juan is a card game version of the smash hit Puerto Rico.

The 110 cards in the game represent buildings, each of which has a building cost and a victory point value. Some buildings produce goods, others have special abilities. As with many other card games, the variety of cards creates a layer of complexity atop the basic rules, and replayability is enhanced through exploring different strategies underpinned by powerful combinations of abilities. The central concept of the game is that cards are purchased (transferred from a player’s hand to his tableau) by discarding other cards from the hand. In other words, cards are both currency and commodity.

On his turn, the active player selects a role: Producer, Trader, Builder, Councillor or Prospector. Then all players, beginning with the active player, perform the activity associated with that role.

In a producer phase, production buildings yield goods. In a trader phase, players trade those goods for cash, i.e., cards. In a building phase, players purchase buildings as previously described. In councillor and prospector phases, players add cards from the deck to their hand – the councillor phase benefits all players, while the prospector phase benefits only the player who chose it.

The game ends immediately after a player builds his twelfth building. Victory point totals are calculated and the highest scorer wins. 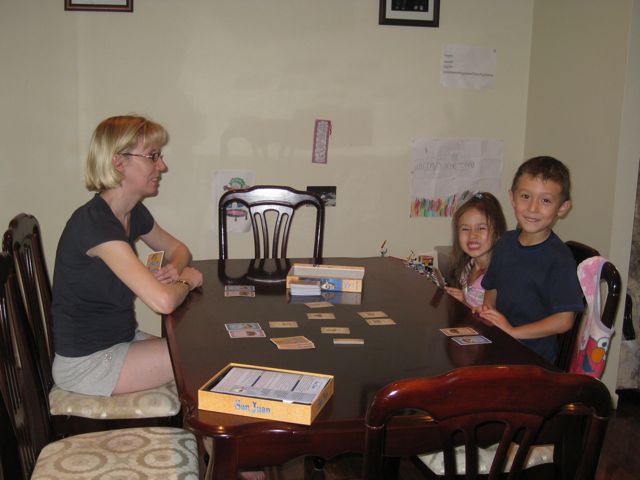 This is the first language-dependent game that I played with my son, a bald-faced but successful ploy to improve his reading skills, not that he needs too much encouragement. While he understands the rules, he has yet to acquire the big-picture perspective required for a victory. He is learning quickly, though, with some additional advice from me. For example, his first strategy was to build an expensive building as early as possible; this is rarely a wise move as it is crucial to maintain one’s development pace throughout the game, and benefits of the expensive buildings only take effect at the end of the game.

This is a far heavier game than the others we have reviewed so far, and is not recommended for younger children. Older children and adults alike will enjoy the scope for experimenting with different paths to victory. 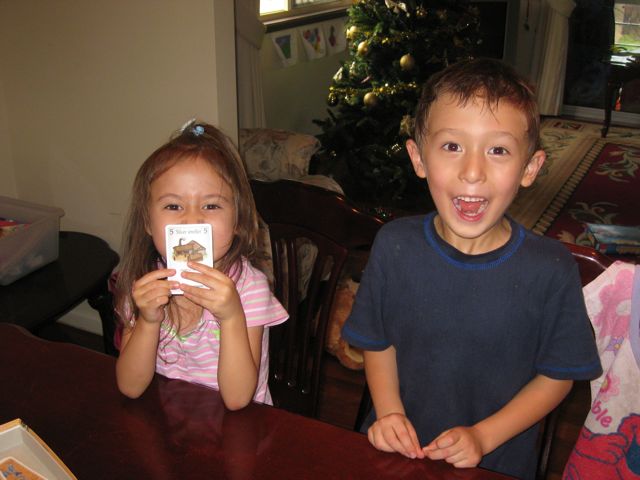 Which is more fun, posing or playing?