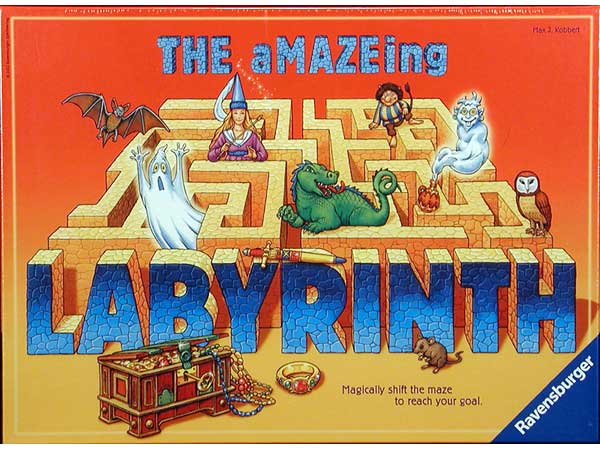 Labyrinth, also know as The aMAZEing Labyrinth (geddit?), has been around for almost 25 years and has inspired several different versions of the game.

The board is a 7×7 grid of tiles representing the corridors of a maze. 16 of these tiles are fixed, the other 34 can be shifted. “But wait,” you cry, rather melodramatically, “that comes to 50 tiles, and you only need 49 for a 7×7 grid.” There is always one tile spare, that my children refer to as the “shoving tile” because it is used to shove a row of tiles within the maze, changing the connections between corridors and causing another tile to pop out the other side. (We came up with the term “shoving tile” while playing a similar game, Chateau Roquefort, and the name stuck.)

There are 24 treasure cards, corresponding to items and creatures depicted on 24 of the maze tiles. These cards are shuffled and divided evenly among the players. Each player may look at his topmost treasure card, representing the next treasure he must navigate to.

Players’ pieces start the game at the corners of the board. On his turn, a player performs a “shove” as described above, then moves his piece any distance along connecting corridors. If he ends his turn on the treasure matching his card, he may discard that card, moving on to the next goal. Once he has obtained all treasures, he must return to his starting space to claim victory. 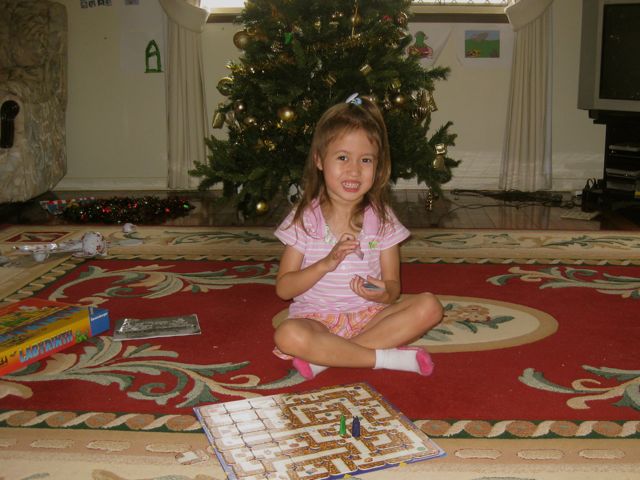 The rules are simple, but solving the puzzle of finding a path to your goal can be difficult. It is not just that the corridors may not be connected, but that other players can sabotage your plans, deliberately or otherwise. The puzzle-solving nature of this game lends itself to semi-cooperative play, so that younger players can receive assistance acquiring their treasures. My children enjoy this game as a not-quite-competitive activity, although my son is always on the lookout for an opportunity to push another player off the board (when this happens, the piece enters the opposite side of the board, so it’s mighty inconvenient but not fatal). Also, we have implemented a house rule whereby everyone shouts “Hooray!” whenever someone reaches their treasure.

From the adults’ perspective, the game is short and presents enough of a challenge to keep things interesting. The artwork and components are decent and our copy of the game has proved more durable than many others in our collection.