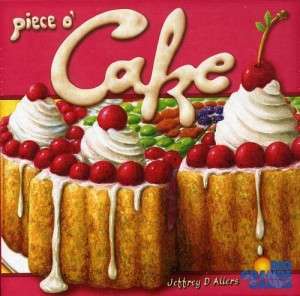 Piece o’ Cake, designed by Jeffrey Allers and published in 2008 by Winning Moves (also by Rio Grande Games), is a game about cake. Winner, winner, cake for dinner!

The game includes 57 slices of cake (wedge-shaped pieces of thick card), in 8 varieties as follows:

The cake slices are placed face down and shuffled. (Now that’s a weird concept, shuffling slices of cake!) Two slices are set aside, removed from the game. The other 55 slices will be used to make cakes.

The starting player deals out 11 slices to form a cake. (Now that’s a weird concept … wait, I’ve already done that.) He then divides that cake into a number of pieces equal to the number of players. There is no requirement for the sizes of the pieces to be similar, although, naturally, each piece must have at least one slice.

Then, beginning with the player to the left of the cake-maker, each player has one chance to take a piece o’ cake. After taking a piece, he decides whether the constituent slices will be eaten (turned face-down, to score points equal to the number of dollops on the slice), or collected (kept face-up, in an attempt to have a plurality of that variety at game end, scoring points equal to the number of slices of that variety in the game, e.g., 11 points for having the most chocolate slices, 3 for having the most plums).

Instead of taking a piece of cake, a player may elect to forfeit his turn, in order to eat one variety collected in a previous round.

At the end of the game, players score dollops for all eaten slices, as well as points for varieties in which they hold pluralities. Players with tied pluralities all score full points for those varieties.

I purchased this game knowing that my children would love the theme and artwork. After reading the rules – which took all of 5 minutes – I thought that they would probably have no trouble understanding how to play. However, it seemed that the game could present too many options to players, especially for the cake-maker-cum-cake-cutter. If my calculations are correct (and I don’t guarantee it, even though I have a university degree in mathematics, I just asked Wolfram Alpha), there are as many as 330 ways to cut an 11-slice cake into 4 pieces. Even deciding which slices to eat and which to collect might be too difficult for most pre-schoolers.

This game may even be suitable for outdoor play, as the cake slices are heavy enough to withstand a light breeze. Perhaps we should bring it to our next picnic!

If anything, I underestimated the enthusiasm with which my children embraced this game. Apparently, cake is such an exciting theme for a child that little else matters (should I have been surprised by that?). My four-and-a-half year old daughter particularly enjoyed pretending to eat the cake slices, so much so that some of the pieces actually ended up in her mouth! As soon as we had finished the first game, they immediately asked to play it again, so it had certainly piqued their interest.

As for strategy, my daughter chose to eat almost everything, which was not a bad approach, as she came second in her first game. My six year old son chose to collect almost everything, which was also not a bad approach, as he came first! I put a lot of thought into which slices to eat and which to collect, and a fat lot of good it did me, as I came fourth and last. My son also won the second game with a chiefly collector’s strategy, although I did finally redeem myself with a victory in our third game. By this time, I could see that my son was thinking deeply about his moves, taking into account his opponents’ positions, while my daughter was making decisions more randomly.

The only reservation I had about this game was, as predicted, the downtime that occurs when a player is deciding how to cut the cake, a golden opportunity for analysis paralysis or vapor lock. This is relatively short compared to many other games I can think of (not so many children’s games, perhaps), but I noticed it because my son would try to move the game along by telling other players how to cut the cake. On the one hand, it is amusing to see him argue for a division that is supposedly in the best interests of the cake-cutter, yet mysteriously always favorable to him and unfavorable to me; also, it was clear evidence that he was immersed in the game. On the other hand, his “helpful suggestions” bordered on overbearing, so I found it a challenge to temper (rather than dampen) his enthusiasm so that the other players felt less pressured.

Overall, I felt that both my children enjoyed the game to a similar extent, even though they were operating on two very different levels. Nor did my daughter’s “less strategic” play diminish my enjoyment of the game. I am comfortable recommending this game for children 6 years and up because of its appealing theme, although I admit that the publisher’s recommended age range (8 years and up) is more appropriate for the game as an intellectual challenge.

Given the strongly favorable first impression, the durability of the game components, the ease of rules explanation and the game weight and length, I predict that this will be a popular choice for a filler game with our family and guests in the foreseeable future. 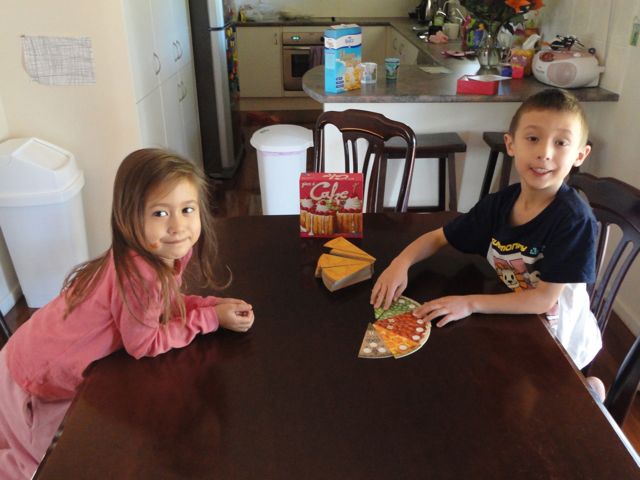 What would you like immediately after breakfast? Cake, of course!