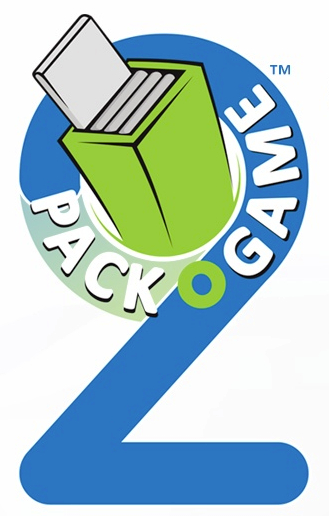 When you imagine a game full of depth, tactics, and strategy, a game with many bits that is stored in a box most likely comes to mind. But what if a game could be no bigger than a stick of gum and still provide you with everything you crave from larger games? Impossible you say? Then prepare to be amazed as I show you how a game small in stature plays like a giant at the gaming table.

Pack O Games (Set 2), is a new collection of 4 games designed by Chris Handy and published by Perplext. Each game comes in a box that is roughly the same size as a package of gum and will reportedly match the same component quality as those found in Pack O Games (Set 1). The initial offering of games is expected to increase and is dependent on how successful the Kickstarter campaign is.

More Games to Chew On

Similar to our last review of the games contained in the set, I will not go into great detail regarding how the 4 games are set up, played, or won. Instead, I will provide an overview of each game that will help you determine if the game is of interest to you.

Rum is a set collecting game wherein players are attempting to win the favor of fellow shipwrecked captains by providing them rum. This is done by either blindly drawing Rum cards or combing the beach (where the cards are face-up) to create sets of certain colored bottles. Once a captain is claimed, it’s taken by the players.

But captains are drunken louts who aren’t much good for anything and will quickly come to the aid of the player’s opponent if given more rum than they were initially provided. In this way, players fight for the drunk captains favor to obtain points. Players can even claim more than 1 captain at a time during their turn.

The cards in the Shipwreck are all face-down and players must draw blindly. If they have a card they can use, they can match it with a card from the Beach. Players can also draw directly from the Beach, but must replace the card with a face-down one. If the Parrot card is drawn, the player loses a Rum card and the Pirates get closer to the island. As the game continues, players attempt to score a set number of points. The first to do so wins the game. If the Pirates reach the island before the players can collect enough points, the game ends and the player with the most points wins.

To learn more about Rum, visit the game’s web page.

Gym is a surprisingly complicated game where players will divide up into equal teams and draw cards into their hand. The object of the game is to win by dominating 4 different sports events using the Kid cards the players collect form the middle of the playing area. Each Kid card will have 1 or more sport events they can participate in. In theory, the players just need to collect enough Kid cards so they have the majority of points per event, but this is not how the game is played.

When all the Kid cards are placed, the points are counted and the players with the most win the game.

To learn more about Gym, visit the game’s web page.

Orc is a game of domination and hand management. Each Orc card has 1 or more Orcs on their ends and two colors. The colors are referred to as Territories. The object of the game is to capture different Territories using cards with Orcs that come from the same Territory. All the while, the player’s opponent will be doing the same thing.

To either side of each card in the Battle Line is a stockpile that contains the cards the players draw. When a stockpile is depleted, the Territory it’s next to has a battle. The player with the most Orcs wins the battle and collects all the Orc cards attached to that territory. The game continues until all the Territories have been fought over. Players score points for the number of Territories they won with Orcs and their overall Orc number.

To learn more about Orc, visit the game’s web page.

Sow has been described as “Mancala meets secret goal farming”.  I don’t know about the secret goal aspect of the game, but I can certainly see why people suggest Mancala is a close relative. In this game, players will be moving seeds around a garden, picking them up and redistributing them. As the cards are placed, the rows of each garden increase and decrease in length.

As the process continues, seeds turn to flowers that are scored. There are also windmills that change the direction in which cards are placed, gophers that cause issues, and watering cans that can give you a boost. Matching seeds turn to flowers, giving players a very real incentive to think hard about where they are placing their cards each round.

Scoring is pretty simple. Each player has a “favorite color” (I guess that would be the secret goal aspect of the game) that awards players a lot of points if they have flowers that match the color in question. Even colors not identified as a “favorite” count for points, however, so no flower is considered worthless. Interestingly enough, and a lot of fun to play with, each flower is two colors. If the outside color (the petals) is the favorite color is it worth fewer points than the inside portion of the flower. In this way, players have a lot to think about as the game progresses.

To learn more about Sow, visit the game’s web page.

To learn more about all these games, visit the publisher’s website or visit the Kickstarter campaign. 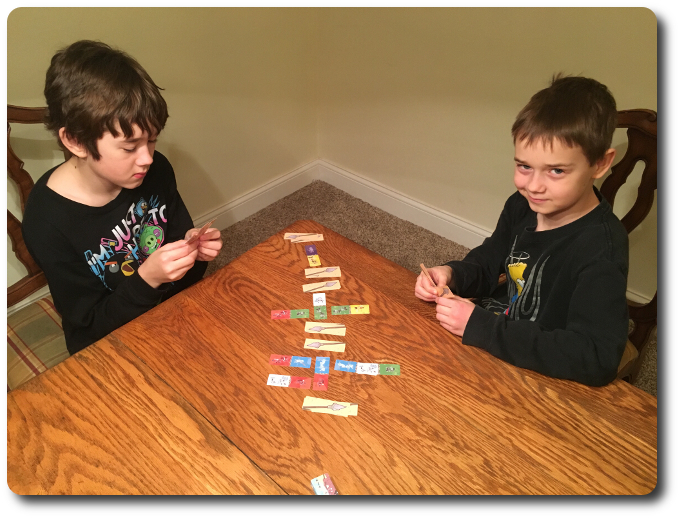 The Child Geeks who taught themselves played a few games wrong, but still had a great time

The Parent Geeks were very pleased to see the new games and even more so when they learned that the games were so different. As one Parent Geek put it, “I am amazed at how many different games the designer is able to put out. They are all so unique and challenging. I’m really impressed.” The Parent Geeks were happy with the new games, but felt that they didn’t hit all the areas the games should. Orc was the least interesting, as was Gym, with most of the time being spent playing Sow and Rum. While all the games were enjoyed, the Parent Geeks had their favorites and their only criticism was that there wasn’t more games.

The Gamer Geeks had no problems learning how to play each of the new games and finding aspects of the game play they liked and didn’t like. According to one Gamer Geek, “Like the first set, each game has its pros and cons. For example, Sow gets a little messy at the table and Rum get confusing with all the cards with points twisting and turning around.” Most of the Gamer Geeks agreed that the games had their flaws, but they couldn’t think of any reason why the flaws should mean avoiding the games. As one Gamer Geek said, “You’ll either like these games or mildly enjoy them. Either way, you’ll leave the table feeling like you spent your time wisely.” All the Gamer Geeks voted to approve the collection of games.

Individually, I’m not certain how these games would hold up with our 3 groups. They are small, easy to learn, and sometimes difficult to play. Each is a game in and of itself and could stand on its own feet. What makes them so intriguing is their size and the number of games provided. A small game that plays big is always a shocker. Put 4 of those in a small bag and you’ve got yourself something wonderful. Size does not suggest value, but players instinctively understand that a small game that is much more involved and engaging than they originally thought is something to admire.

As for me, I’m most pleased with the 4 new games and I think they easily fit in with the other 8 we have. For those who don’t have all the games, it’s neither necessary or recommended to get them all at once. Each game is different and each can be purchased individually. They are independent of each other, but certainly increase in perceived value when combined. Here are 4 games that take little space and little time to play, but demand all of a player’s attention. That’s impressive and fun. Do check these new games out when you get a chance.