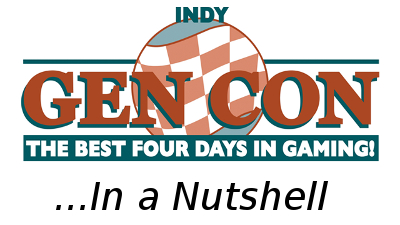 Let me first preface this summary by stating how incredibly tired I am. Gen Con is not so much an event as it is a trial of the mind and body. A geek is constantly bombarded by sounds, sights, and odors. Very little sleep is had, bad (but tasty) food is eaten in terribly unhealthy portions, and the smells from the Indianapolis sewer system hit you like a pissed off boxer every time you walk outside. Regardless of the mental and physical onslaught, I keep coming back as do the thousands I had the pleasure to mingle with at Gen Con this year.

OK, I’ve had my third cup of coffee… Let’s do this.

Game of the Con

I was somewhat underwhelmed when it came to the games being demoed this year. Rampage and Trains got a lot of hype, but when I sat down and saw them, I wasn’t blown away. Both games did interesting things and appeared to be entertaining enough based on the demos provided, but I didn’t walk away from the table feeling like I had to throw my money at them. Based on the many Trains game boxes I saw underneath sweaty armpits, I’d venture to guess that my experience was not the norm. As far as Rampage goes, lots of people were talking about it long after they left the demo. Rampage is sadly not yet available, if I was told correctly, which means many had to walk away feeling disappointed and somewhat teased. NO GAME FOR YOU! Well, not for a couple of months, anyway.

For me, the “Game of the Con” is a bit ironic. I have mentioned many times that I do not care for 7 Wonders (feel free to tell me how wrong I am in the comment section below). I like what the game is about, but not how it goes about it. Again, I know I am deeply in the minority when it comes to my point-of-view regarding this game, but we simply cannot be expected to like everything. That’s why I was surprised when I discovered I enjoyed Lost Legends, which is more or less a fantasy themed version of 7 Wonders. What drew me in was the ability to build up a dungeon adventurer, equip them with powerful weapons, magical armor, and then go deep in the dark to kick some monster butt. I can get behind a game like that and very much enjoyed it. Lost Legends doesn’t feel like 7 Wonders and I was entertained from the start. I liked the game so much that I kept thinking about it and finally decided to purchase it on the last day of the convention. Good thing I went when I did because I grabbed the last game available. I greatly look forward to playing Lost Legends in the future.

Strangest Game of the Con

The strangest game I came across was Tomorrow. Essentially, it’s Pandemic in reverse where you are trying to reduce the world’s population through famine, war, disease, and other nastiness. The individual I spoke to about the game admitted up front that he didn’t know much about it, but did his very best to describe the game play all the same. He did a good job, but he also left me with a very strong impression that the game played into negative sterotypes and was highly focused on a thematic and narrative element that I didn’t care for. Specifically, mass murder on a global scale.

I’m not big on riding high horses or standing on soap boxes, so I’ll spare you my 10 minute sermon, but this game gave me the creeps. I won’t be pursuing it, but I’m open to playing it at least once before I make a final decision regarding the game’s worth.

My Biggest Disappointment of the Con

At risk of losing any and all geek cred, I am disappointed that I didn’t get a chance to try the My Little Pony collectible card game. No, I’m not a Brony and no I have no idea why this game is even a thing. My mind cannot fathom why a cartoon clearly intended to support a toy for little girls is such a big hit with adult dudes. But nor will I slander anyone for liking or disliking anything when it comes to our hobby. Geek society is very inviting and warmly welcomes all. Let us not judge those in our ranks as we are all geeks, nerds, and dweebs.

I wanted to try the game for two reasons. First, to see if the game had any soul whatsoever or was nothing more than a themed card game with the single purpose of sucking bank accounts dry. Second, borderline perverse curiosity. I mean, come on, it’s about little magical ponies that poop rainbows and shoot glitter from their eyes! How can you not be the slightest bit curious about that?

Defining Moment of the Con

Finally, we come to the moment that encapsulated all that is awesome, weird, strange, and epic about Gen Con. That, my friends, is the people. Geeks came and played games together in the thousands. Over 41,000 individuals attended last year and the attendance numbers were expected to be even bigger this year. That is incredible.

It’s often times a lonely hobby we pursue. Many will ask what you do for fun, and when you tell them you like to role-play, play board games, build card decks, dress-up as superheroes, or chuck dice, the usual response is blank stares and quiet negative judgement. But at Gen Con, I was afloat in a sea of friends, comrades, and individuals who had as much passion for games that I did – more so, really. The energy that comes from such a geeky mass is unmeasurable but it leaves you feeling excited, energized, and most importantly, with an overwhelming sense that you belong. Every year, Gen Con has been not about what new games are coming out, but who I can shake hands with, smile at, and high-five. Gen Con is about the people, the geek community, and coming together. This year was no different and was a total success.

Gen Con 2013 is over and I’m already making plans for Gen Con 2014. I’ll see you there with a stupidly big smile on my face and nothing but joy in my heart. I can’t wait to bring my little geeks…

If you found my summary to be terribly light on the details, do a quick search on Gen Con 2013 wrap ups. Just about everyone will be publishing something that summarizes their experience at the Con of Cons.