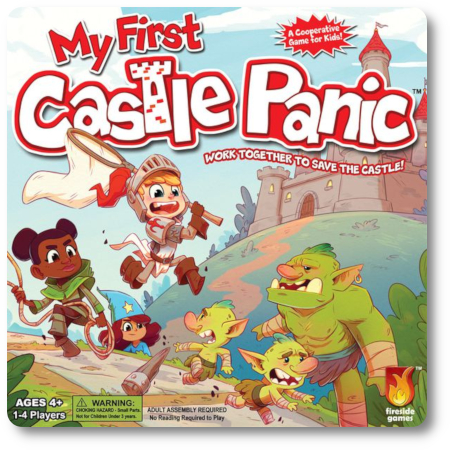 American poet, peacemaker, and a philosopher who played, Mattie J.T. Stepanek, said “Unity is strength… when there is teamwork and collaboration, wonderful things can be achieved.” In this game, all players must work together to save their castle. This is a children’s game, but the lessons in cooperation it teaches is worth an adult’s time. Get the family together and save your kingdom!

My First Castle Panic, designed by Justin De Witt and published by Fireside Games, is comprised of one game board, one Castle piece, one Wall piece, 26 Castle cards, 16 Monster tokens, and four How-To-Play reference cards. The game board and tokens are made of thick and durable cardboard. The Castle cards are as thick and as durable as your standard playing card. The Castle and Wall pieces are made of cardboard and are put together to form stand-up game pieces (a nice touch). The game box and insert are used in the game, with the game insert designed and illustrated to look like a holding cell in the dungeon for the many monster’s the players will be capturing.

Trouble on the Horizon

To set up the game, first unfold and place the game board in the middle of the playing area where all the players can easily see and reach it.

Second, place the Castle and Wall pieces on the game board in their designated spaces, with the Wall piece in front of the Castle piece.

Third, look through the Monster tokens and set aside the three that have a star. Place these Monster tokens on the beginning three spaces on the game board, with the Start space being the first.

Fourth, place the bottom of the game box (which is the player’s castle dungeon) next to the game board. Next to the game box (not in it), place the remaining Monster tokens face-down and randomize. Alternatively, if you have an extra dice or game bag, place the tokens in that instead. The goal here is to allow players to draw randomly without knowing what they are selecting until it’s played. In either case, this is the Monster token draw pile for the duration of the game.

Fifth, shuffle the Castle cards and deal one to each player, face-up. Place the remaining cards face-down. This is the players’ Castle draw deck for the duration of the game. Leave room for a discard pile.

My First Castle Panic is played in turns with no set number of turns per game. This is a cooperative game, meaning that the players all win together or lose together. They are a team and should feel free to talk through moves and share ideas, but no player should ever play for another. A player’s turn is summarized here.

The first action the player takes on their turn is drawing the top card from the Castle draw deck, adding it to their hand. Since this is a cooperative game, players can place their drawn cards in front of them face-up if they like. This is especially useful for your younger Child Geeks who might have difficulty holding cards in their little hands. There is no limit to the number of cards a player can hold during the game.

If the draw deck is ever depleted, shuffle the discard pile and place it face-down to create a new draw deck.

The second action the player takes is looking at their cards in their hand, playing one, and resolving it. Played cards are placed in the discard pile after being resolved. Cards come in two types which are summarized here.

“Hero” Castle cards depict the brave young fantasy warriors who are defending the wall and castle from the horde of monsters that are slowly walking towards it. Each  card has one or more shapes that could be one or more colors. When played, if the shape and color matches the space on the game board with a matching colored shape, any one Monster token on that space is “captured”. Captured Monster tokens are placed in the castle dungeon (the game box).

For example, either of the following “Hero” Castle cards could capture the monster since they both have a blue square. 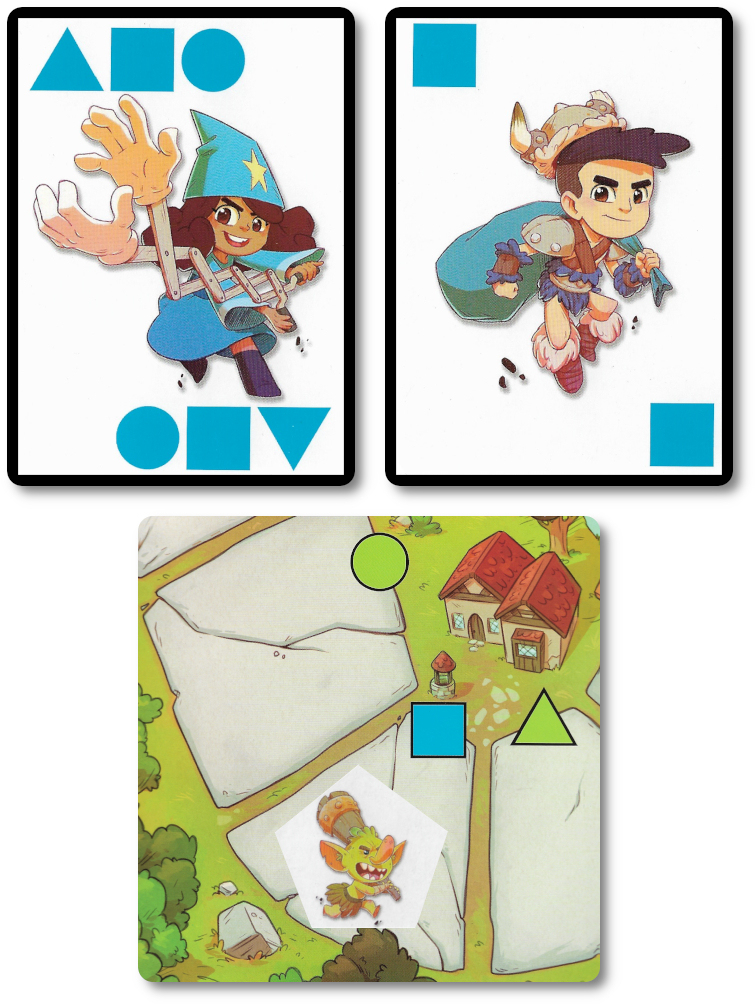 If a player does not have a card to play that matches any of the spaces where a Monster token resides or does not want to play one of their cards for strategic or tactical reasons, they may ask for help from any other player. The player who helps plays their card instead. If none of the players have cards to play (or, again, no card is played on purpose), this step is skipped.

In addition to the “Hero” Castle cards, two “Special” Castle cards are available to play. These allow the player to “boot” any Monster token on the game board back into the Monster token draw pile, face-down, or to replace the Wall piece if it gets destroyed by the rampaging monsters. 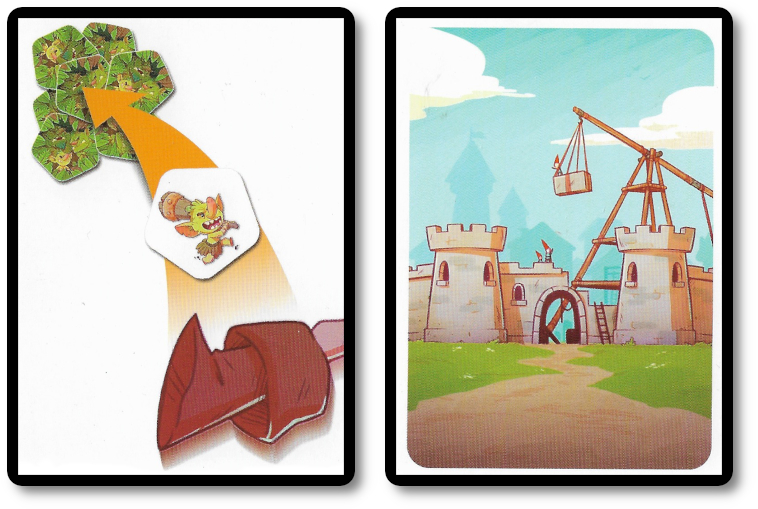 There is a special space for the Wall piece. If the Wall piece is removed, the space is ignored, meaning the Monster tokens jump right to the castle! Yikes!

A. “Shover” moves itself and all Monster tokens one space towards the Wall and Castle pieces once it’s placed.

B. “Marcher” moves itself and all Monster tokens one space towards the Wall and Castle pieces once it’s placed. Then the player draws one additional Monster token, placing it as well.

C. “Runner” is placed in the next free space in front of the Monster token currently closest to the Wall and Castle piece.

This completes the player’s turn. If the game has not ended, the next player in turn order sequence now takes their turn starting with step one noted above.

There are two ways for the game to end.

While My First Castle Panic is best played with friends, you can play the game by yourself. Game play is the same except that the player starts with two Castle cards during game set up instead of one and there are no limits to the number of cards that can be played per turn.

If the game is considered too difficult, there are several rules that can be added.

Of course, if the game is considered too easy, there are a few rules you can include to make things a bit more nail-biting.

To learn more about My First Castle Panic, visit the game’s web page.

The Child Geeks, especially the younger ones, had a wonderful time. According to one Child Geek, “The game is fast and I always feel like I can either play a card or my friends can help me squash a monster.” The older Child Geeks, especially those who have played the original Castle Panic or other cooperative games, found the game to be too simplistic. As one Child Geek put it, “The game is OK, but really easy. I was never stuck, and with all the help players can get, I cannot believe you’d ever lose the game.” But you can lose, especially if players do not manage the threat on the game board. Which, I must add, is never to a point where it caused any of our Child Geeks a moment to panic. Nonetheless, the votes showed that the game received the Child Geeks’ full approval.

The Parent Geeks liked the game for what it was and how it played, but all universally agreed that this was, first and foremost, a children’s game. As one Parent Geek put it, “A good game for the family and the younger players. Too simple for adults.” Which is an understatement when we consider that the suggested minimum age for this game is four-years-old. But as a family game, the Parent Geeks were all most impressed. According to one Parent Geek, “A well planned game with rules that still require you to think, game play that encourages conversation and cooperation, and visually communicates the continuous need to focus on the goal. Great teaching tool and fun game.” When the votes were in, the Parent Geeks gave their approval to My First Castle Panic, finding it to be a fun game for their family gaming tables.

The Gamer Geeks liked the idea, but poo-poo’ed the game. According to one Gamer Geek, “All the elements of a good cooperative game are here and I really like the fact that the game designer didn’t pull any punches, but instead used softer gloves. I think kid games should be ones where you can still lose and you can here. I wish I had games like this as a kid. I would have become a Gamer Geek sooner.” Another Gamer Geek said, “Five stars for a kids game. No stars for a game I would want to play.” All the Gamer Geeks found the game’s quality, rules, and game play to be acceptable, but not anywhere near their level of interest. They voted to reject the game, but only as a title to play on their elitist gaming table (not the family kitchen table).

My First Castle Panic takes all the tropes of the Panic game line and only uses the most basic elements. This is not a watered down version of the game. Rather, it’s a milder, less zesty offering. Still here is the growing and never-ending threat. You can see the danger on the horizon and it will get closer. Here, too, you will also find the occasional “oh, no, we are being overrun” statements. Danger and the need to manage said danger is still very much a part of the game. The biggest difference is that the danger has been cut into small bites so it’s easier to swallow. Much like how I would cut my children’s food when they were small to ensure their pieces were small enough to still chew but not choke. Game pace is measured, threats are real, and timing is of concern, but not overly so.

Overall I was most pleased with the game. It provided our youngest Child Geeks an opportunity to bash the heads of monsters side-by-side their older siblings and adults that was both empowering and entertaining. Laughter throughout and some deep thinking with open conversations on how best to eradicate the enemy. As a family game, My First Castle Panic will be a hit. Just don’t expect this game to hit you very hard. We’re talking baby fists, here. Give this game a try with your little ones when time allows to see if your family has what it takes to save the kingdom.