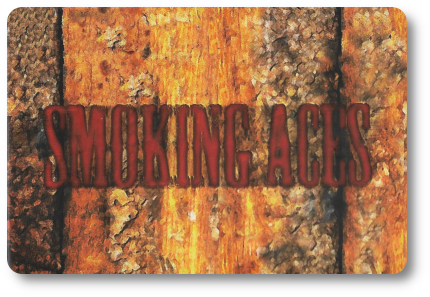 American hedge fund manager, entrepreneur, bestselling author, venture capitalist and podcaster, James Altucher, said “Poker is a skill game pretending to be a chance game.” Poker is a card game that has been played for generations. Be it around the campfire out on the lone prairie or at a high-stakes table in Vegas, the game is always the same. Play your card, take a risk, and attempt to out think your opponent. This Poker derivative, however, adds a twist.

Smoking Aces, designed by Nicholas Markgraf and published by PawnJoker Games, is comprised of 52 cards. The cards are as thick and as durable as your standard playing card. The card artwork, such as it is, makes each card look like it’s made from heat blistered wood with old paper that is stained and ripped. An interesting look.

Have a Seat, Partner…

To set up the game, take the cards and shuffle, placing the deck face-down in the middle of the playing area. This is the draw deck for the duration of the game.

Second, determine the game set up type to be used:

That’s it for game set up. Ensure that all players have enough room in front of them to play up to seven cards. This area in front of the player is referred to as the “Pocket”.

Smoking Aces is played in turns with no set number of turns per hand. A single game could be comprised of one or more hands. A player’s turn during a hand is summarized here. Note that a player’s turn is skipped if they do not have any cards in their hand.

When the draw deck is depleted, shuffle all the cards in the discard pile to create a new draw deck.

In addition to each card in the game representing the standard card suit and number value, cards can also have a special effects. Only cards played to the player’s Pocket are resolved at this time, meaning any cards in the player’s hand are ignored during this step. In any order, the player resolves the cards in their Pocket once per turn. The card abilities allow the player to switch cards in play, limit types of card plays, and ignore other rules or effects. Regardless of the ability, they fall into three different types: 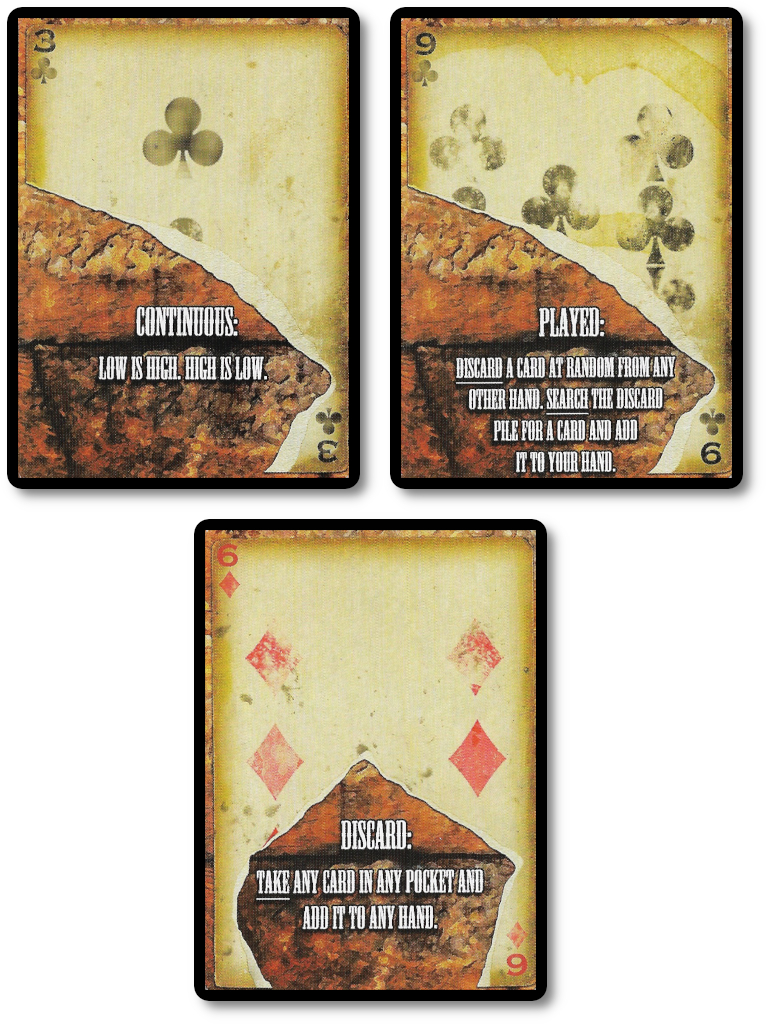 The player must always play one card to their Pocket if they are able to. Note that cards discarded for their effects are not considered a “played card”. If the card played to the Pocket has an effect, it’s now resolved.

When playing cards to the Pocket, the players should be thinking of two things. The first is the card suit and value they are playing. The goal here is to play cards to the Pocket that will be used to create the player’s score at the end of the hand. The second is the timing of any effects on the card. Players must resolve the card when played. Timing is something of a concern for some of the card effects.

The Fickleness of Lady Luck

After all players have five cards in their Pocket, the hand comes to an end and is scored. Players now attempt to create the highest scoring hand using the five cards they played to their Pocket. Standard Poker hand scoring applies here, with Five-of-a-Kind being the highest hand (five cards of the same rank) and High card being the lowest (a single card of any value). Or to quickly summarize, from highest hand to lowest:

The player with the highest hand wins the hand. If a player ever has the Dead Man’s Hand in their Pocket (Eight of Clubs, Eight of Spades, Ace of Spades, and Ace of Clubs), they immediately lose and their turn is over for the duration of the hand.

This completes a single game or it could be the first of many hands in a game. It’s up the players to decide.

The Child Geeks were lukewarm on Smoking Aces right after the first hand. It’s not because the game is difficult, it’s because it’s not obvious to the novice player what the hand combinations are and how they are scored. Or, if you like, the game of Poker. The Child Geeks had no issues with the card effects and how they were used, they just never knew if they were using them well. According to one Child Geek, “I don’t know if the cards I am playing are good ones or bad ones. I just hope whatever I play lets me beat my brother.” Another Child Geek said, “I know what Poker is because I’ve seen old cowboy movies, but I don’t understand why one hand is bigger than another. Makes it hard to play.” You bet it does. We created a small chart for the Child Geeks (and anyone who needed a reminder) that showed the hand scoring progression which helped, but the game itself never found a place in the hearts of our youngest players, resulting in this smoking game never catching fire.

The Parent Geeks who knew how to play Poker found the game to be both entertaining and annoying. According to one Parent Geek, “The game of Poker is already complicated, deep, and a lot of fun to play if you are also trying to play with your opponent’s minds. This just felt unnecessary. Why do I need special abilities for a Poker game? I don’t. I’d rather just play Poker versus whatever this is.” Another Parent Geek said, “I actually like this better than Poker. It gives the game a bit more to think about, but I can see why a lover of Poker would be annoyed by it.” The end result was a mixed endorsement from the Parent Geeks who felt that the game wasn’t bad, but no one could agree if the game was even necessary to begin with.

The Gamer Geeks didn’t care for Smoking Aces right from the start. According to one Gamer Geek, “Talk about a game that is not needed. This is just a deck of cards with some random effects thrown in that do nothing more than cause problems. Just give me Poker. That’s a game of skill, of depth, and a lot of meta. This just felt like noise most of the time, annoying little changes to the game that weren’t necessary or welcome.” Another Gamer Geek said, “I always appreciate it when older games are revived, but I think this was taken in the wrong direction. I wanted them to make the Poker game more interesting. Instead, I feel like we were given a Poker game that included rules and game play that did nothing to improve the whole.” The Gamer Geeks agreed that Smoking Aces was a smoking pile they didn’t care to approach again.

Smoking Aces is nothing more than a normal deck of cards that also have a few effects. The game is Poker. If you don’t know Poker, you won’t understand a single thing about Smoking Aces. So, first, go learn Poker, which takes five minutes but a lifetime to master. Then come back and play Smoking Aces that adds effects to the cards. The game doesn’t do a good job with this transition. Even the rules make the assumption that the player knows what Poker is and how it is played without ever actually using the word “Poker” (it is only mentioned once and on the back of the game box). Poker is a “known game” in general, but not one that is well understood or played a great deal to a point where you should assume any random person you encounter knows how to play. As a result, Smoking Aces feels like a game that you recognize, but are a bit lost with right off the bat.

I liken the game to candy sprinkles on a pepperoni pizza slice. Yes, you can add candy sprinkles to the pizza, but should you? Doesn’t hurt, I suppose, but nor does it make the pizza better. That’s what we got here. Sprinkles that do not make anything sweeter.

For those who really like Poker but don’t see themselves as a gamer, I suppose you could use Smoking Aces as a bridge. But that’s a bridge I wouldn’t count on crossing with ease. I know Poker enthusiasts and they take their game very seriously. Smoking Aces does not take Poker seriously and that might cause some players to turn sour against the game. For those who are looking for more “game” in their card game like Poker, Smoking Aces should do the trick. It adds a bit of twist to the classic, but not to a point where the classic card game itself is changed significantly enough to make it feel like a different game.

Which is part of the problem. This is still Poker. Love it or leave it, you cannot shake the fact that this is a game with extra rules trying to make itself look like a different game. Which it is and is not at the same time, making it confusing. Are you playing Poker? Are you playing a “take that” card game? Both? Neither? Give this game a shot to see if it does anything other than smolder on your table or it sparks new interest in a classic card game played around the world.