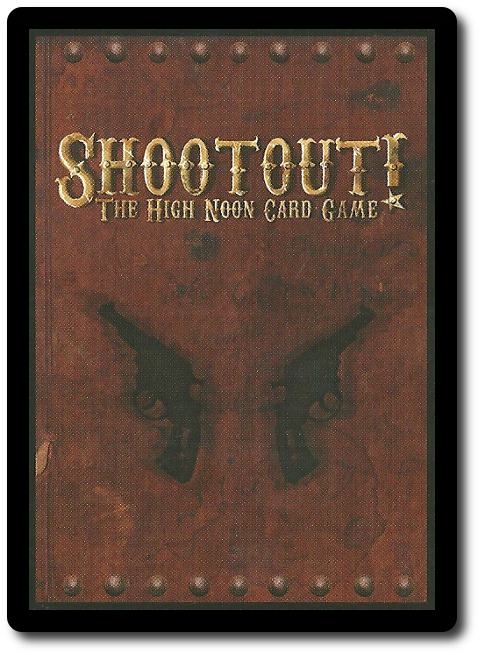 In the great open wilderness and small towns found in the West, law and order is often at the end of a gun barrel. Those who have power keep it jealously, but no man is immune to a sudden and rather lethal dose of lead poisoning delivered by a bullet. In this game, you will be challenged. Win and you survive another day. Fail and you’ll end up being just one more coffin put in the ground.

Shootout!, designed by Chris Amburn and published by New Experience Workshop, is comprised of 88 cards. The cards are as thick and as durable as your standard playing card. The illustrations on the cards are clean and well done, with some in color and some in black and white.

To set up the game, first take the cards and shuffle.

Second, deal each player 5 cards, face-down. This is the player’s hand. They should look at their cards, but keep them hidden until played.

Third, set the rest of the deck face-down in the middle of the playing area. This is the draw deck. Leave room for a discard pile.

That’s it for game set up. The player left of the dealer is the first player.

Shootout! is played in turns. A player’s turn is summarized here.

The first thing a player does on their turn is draw the top-most card from the draw deck and place it on top of the discard pile, face-up. If the card reads “When this card is on its way out”, it should immediately be resolved before continuing to the player’s next turn step. 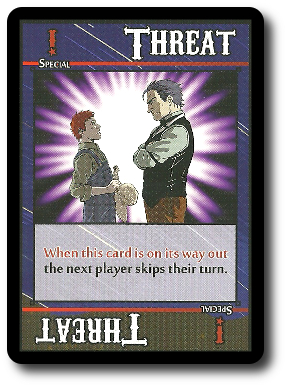 Note that a shootout cannot occur on a card flip during this step until all players have had at least one turn. If there are no cards left in the draw deck on the player’s turn, they skip this step and step 2, going directly to step 3.

The player can now take the visible top-most discarded card or draw a face-down card from the draw deck, placing whichever card they take into their hand.

A shootout can occur two different ways. The first is when a shootout is drawn during step 1 of the players turn. The second is when a player purposely discards a Shootout card to the discard pile. The player must immediately decide who they will duel. 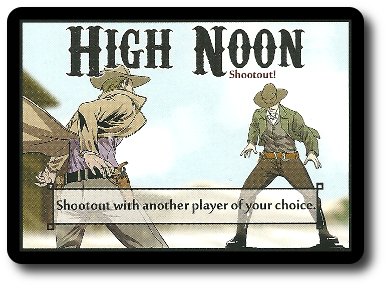 Each player in the shootout now plays one card from their hand, face-up, in front of them. A player is limited to playing one Title, one Weapon, and one Familiarity card, if they have or want to play them. Players can also play one card per turn during the shootout that reads “During a shootout” and any other bonus card that gives a bonus that has not already been played by the player.

Players continue to take turns playing out one card at a time. A player may “pass” on their turn, which stops them from playing any additional cards during the shootout. When both players pass, the bonuses on the cards and effects are resolved. The player with the highest calculated value wins the shootout. If there is a tie, both players reveal a new bonus card, with the highest value winning and breaking the tie. This continues until the tie is broken. If all the cards are played out, the player who started the shootout reveals the top-most card from the draw deck followed by the other player. The values are compared with the player with the higher drawn value winning. All cards played are sent to the discard pile.

If playing against an opponent, losing the shootout means you are out of the game. The player who wins draws seven cards and discards two to the discard pile. Discarded cards do not trigger any effects or provide any bonuses.

If the draw deck has been depleted, shuffle the discard pile and place it face-down to create a new draw deck.

The last player standing is the winner. They get to leave town and live another day.

If the player’s like, they can determine the winner of the game by the number of successful shootouts won. Instead of being knocked out the game, the loser draws seven cards, keeps five, and keeps playing. The first player to win three shootouts wins the game.

To learn more about Shootout!, visit the game’s web page.

The Child Geeks jumped right in and went to town, firing at each other every chance they got. This lead to some intense moments, as players would stack card after card in hopes of out doing their opponent. This inevitably lead to a great deal of frustration from the loser and triumphant cheers from the victor. According to one Child Geek, “It feels great when you win and hurts so much when you lose.” None of the Child Geeks liked that they were out of the game when they lost, but they didn’t have much time to think about it as most games took less than 10 minutes. While strategy and tactics were more or less absent from any games that I observed, it was obvious that all the Child Geeks were having fun. As one Child Geek put it, “The game is super fast and super fun!” When the gun smoke cleared, all the Child Geeks voted to approve the game.

The Parent Geeks were less impressed, finding their choices to be limited and sometimes not even available. According to one Parent Geek, “It’s all about the cards. If you don’t have what you need to survive, you are out of the game faster than it took to set it up.” While the Parent Geek was being facetious, it was not uncommon for a Parent Geek to be outgunned badly and early. It was always clear who brought enough ammo to last the war. Another Parent Geek said, “What I like about this game the most is deciding when it is the right time to attack my opponent and hope that they don’t have better cards than me!” During some games, none of the Parent Geeks attacked until they felt they had the stronger hand, while some Parent Geeks attacked as soon as possible, hoping they would catch their opponents by surprise. What wasn’t a surprise was the overall endorsement by the Parent Geeks. Some liked the game, some didn’t, dividing the group in two. This resulted in a mixed level of approval.

The Gamer Geeks didn’t care for this game in the slightest. According to one Gamer Geek, “There will be times when nothing goes on at all and then some games where you get attacked before you even have a chance to play your second hand. Way too random if you ask me.” Another Gamer Geek said, “A fun game for the kids and for casual gamers, but this game feels like it is shooting blanks.” The Gamer Geek who provided this comment made it a point to tell me how clever he was. Clever or not, it was obvious that the Gamer Geeks were not enjoying themselves. When some Gamer Geeks were knocked out of the game, they left with a smile. Clearly Shootout! missed its mark, but then again, it’s also possible that the gaming elitists were never the game’s target.

Shootout! is not a difficult game to learn or to play, but forget about mastering it. Cards are randomly given and the only choice one gets when it comes to cards is drawing what everyone sees (and therefore knows you have) or draw blind (which will be a random card, but no opponents know what it is). This layer of subterfuge feels unnecessary most of the time until you get attacked and you get to display your cards to the table. Many a gunfight was lost based on not knowing what the opponent had at their disposal. This would suggest that an element of surprise is necessary to win, but I would argue it’s more about misleading the opponent rather than jumping out of a bush and shouting “Yeah!” while firing your gun in the air. The game just isn’t deep enough to provide a player much in the way of strategy or tactics, leaving the player to devise sneakier methods to win.

One aspect of the game I really enjoyed was how the shootouts were resolved. A player could, if they were so obliged, “unload” their entire hand into their opponent. This leaves the player somewhat vulnerable during the next few turns since they “reload” their hand with blind cards. This almost always invited other players to take their turn to attack and almost always their target was the last player to win a shootout. Not a bad thing, but it did annoy many of our players.

Shootout! is a fast game and it never suggests it’s anything other than a light diversion. Good stuff for the casual players and the Child Geeks, but it left pretty much everyone else feeling disappointed. This game will be a hit with those who are looking for a quick bit of fun with no strings attached. Do put this game in your sights if you are itching for a fast-paced shoot’em up card game.