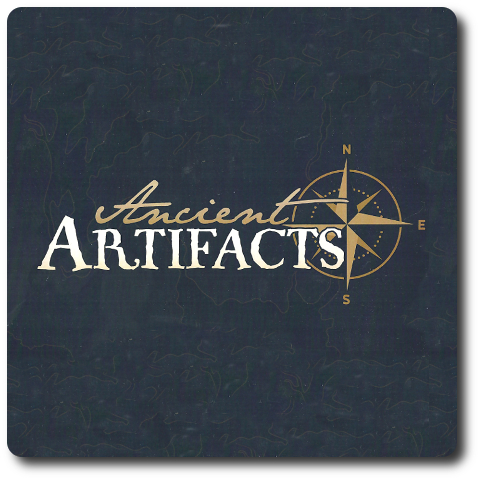 Finding lost secrets is one thing. Keeping them hidden from others is a completely different challenge. In the competitive world of archaeology, grants and renown go the scientists who deliver the goods. Not necessarily the ones who do the most work. In this high stakes game of winner takes all, the road to victory is often paved by your opponent. Knowing when to blaze your own path and when to follow others will secure your place in history.

Ancient Artifacts, designed by Derik Duley and to be published by Lagniappe Games, will reportedly be comprised of 1 Atlas game board, 1 Career sheets pad, 1 cloth bag, 9 standard six-sided Action dice (3 orange, 3 blue, 3 green), and 6 custom Results dice. As this is a review of a prepublished game, I cannot comment on the game component quality. Artist Fedor Sosnin has provided some colorful illustrations to support the game’s theme and narrative.

To set up the game, first give to each player one Career sheet (torn from the pad) and a pen or pencil to write with. I strongly suggest a pencil. Place the pad of Career sheets back in the game box.

Second, place the Atlas game board in the middle of the playing area, setting the six Results dice next to it.

Third, place the nine Action dice in the cloth bag and shake it around a bit to mix them up.

That’s it for game set up. Determine who will be the first player and give them the dice bag.

Beneath a Canopy of Green

Ancient Artifacts is played in rounds and turns. A player’s turn is summarized here.

The player can continue to pay $1 to roll additional dice, repeating the above until such time they have rolled the values they want to use or are happy with.

The player can now take the Action dice rolled and place them in a corresponding Action slot found on the Atlas game board. The available actions are listed here. 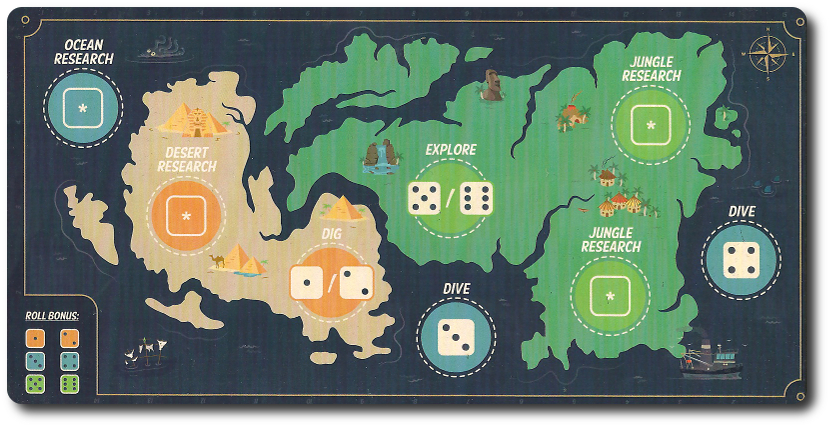 The player now takes the six Results dice and rolls them. The player’s Career sheet displays the number and type of icons necessary to complete the player’s current step on their Renown track. 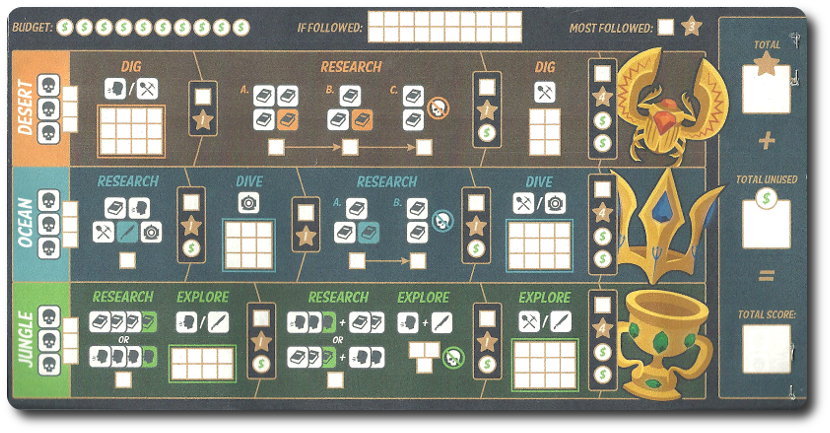 If a player ever rolls three or more Raider icons, they have “busted”. Their turn immediately ends. The active player makes no further progress and must mark off one Raider box on their Renown track, as do any opponents who are “following” the active player. Busting three or more times in the same track blocks it and the associated region for the rest of the game.

If there is at least 1 Action die in each of the Atlas game board regions, remove all dice and place them back in the dice bag. If not, leave the dice as they are currently placed. The dice bag and any dice rolled but not placed are passed to the next player in the turn order sequence.

This ends the player’s turn. The next player now takes their turn starting with step 1 noted above.

Out of the Jungle

If a player is unable to make any progress on their tracks, the final round of the game begins. Each player gets one last turn to do as much as they can. Once everyone has had their last turn, the game ends and final scoring begins.

Whomever has the most Renown points wins the game!

Ancient Artifacts can be played solo. The rules or more or less the same except for the following changes.

To learn more about Ancient Artifacts, visit the Kickstarter campaign.

The Child Geeks had a great time with the game, quickly learning how it was played and jumping into the action. And by “jumping”, I mean “rolling”. According to one Child Geek, “The game is really easy to learn. All you have to really know is when to stop rolling and when to let others do all the hard work for you.” The Child Geek is referencing the player’s ability to follow others, essentially thematically letting other players blaze the trail into different regions and do all the research which can then later be used. Another Child Geek said, “I thought the game was fun and I liked how you always were playing, even when it wasn’t your turn.” Since players always have an opportunity to “follow” an opponent who is having their turn, players are never really not playing. This was a big hit with the Child Geeks who hate downtime. After all the relics were recovered, the Child Geeks voted to approve Ancient Artifacts.

The Parent Geeks also found the game to be entertaining, both with their families and with their peers. The biggest complaint I heard was that the game didn’t sit enough players. According to one Parent Geek, “I don’t see why you couldn’t sit more people in the game. I don’t think it would break it.” The Parent Geeks tried this and they were right. Sitting more than 4 players upset the total time it took to play the game, but having more than four players did not seem to break it. In a few cases, games even took less time since players kept following opponents who were doing their actions. As one Parent Geek put it, “In some games, you have to know when to hold things back. This game is all about betting on if your opponent will do better than you. If they do, you most definitely want to be following in their footsteps!” When all the expeditions were over, the Parent Geeks voted to approve the game.

The Gamer Geeks weren’t that interested in the game, finding it to be fairly repetitive and predictable. According to one Gamer Geek, “I think the game is best played solo, in my opinion. Playing with others doesn’t feel that entertaining or engrossing except when you follow them. Even then, you are giving someone else control, making it feel like you never really were in the front seat driving this game the way I really wanted to.” Another Gamer Geek said, “I nice enough game with a few game play elements that I’ve seen before, but that isn’t horrible. The game is just OK, in my opinion. It didn’t really thrill or disappointment.” None of the Gamer Geeks found the game to be broken or poorly executed, but nor did they find it to be engrossing. In the end, the Gamer Geeks voted to reject the game, after having explored it and found nothing of value to them at the end of the trail.

If Rolling Through the Ages and Yahtzee had an adventurous child who liked to explore, it would be Ancient Artifacts. The game’s premise and game play is very straightforward, providing players a clear understanding of what is expected of them. The most difficult part of the game is the management and resolution of dice. The second most difficult, and arguable more entertaining aspect of the game, is following other players. Either letting them do the work for you (giving you a clear jump in the competition) or purposely doing all you can to fail so as to hurt the parasitical opponents latching onto your backside.

Playing the game solo or with a group is a different experience. I found the solo version to be fairly boring and much preferred the ability to use my opponents’ turns to my advantage. This ability to leverage other player’s good luck made the games feel much more involved and interesting. It also introduced a good deal of frustration and annoyance, since most players didn’t like the fact that they were aiding their opponents. But even leaving dice can aid others, meaning there is always some sort of passing to an opponent some sort of assistance. Victories were based firmly on the back and actions of others, making each game a race of leapfrog, wherein players stepped all over each other to cross the finish line. Not a bad thing in the slightest, but it did catch several of our players off guard.

Ancient Artifacts is an interesting enough game to be keep most players entertained. Only the gaming elitists found the game to be lacking enough merit to grace their gaming table. Child Geeks, Parent Geeks, and families all enjoyed themselves, leaving this reviewer to suggest that the game is great for casual gamers. Search this game out and explore it when you get a chance.