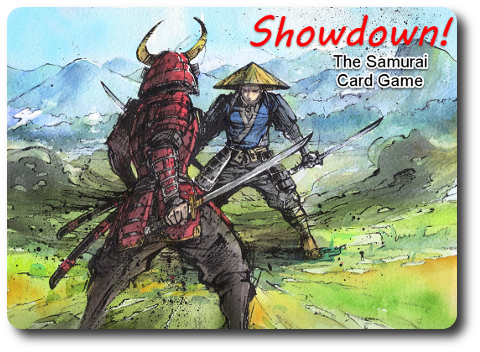 Feudal Japan is a land of beauty that is governed by strict rules and well-defined lines that should not be crossed. Honor is held in the highest regard and death can bring great prestige or downfall to a family name. You find yourself traveling in search of your fortune, but each step could bring danger. Defend yourself with sword and cunning, but above all else, never lose your honor.

Showdown!, designed by Chris Amburn and to be published by New Experience Workshop, will reportedly be comprised of 88 cards. The cards are as thick and as durable as your standard playing card. The illustrations on the cards are clean and well done, with some in color and some in black and white.

To set up the game, first take the cards and shuffle.

Second, deal each player 5 cards, face-down. This is the player’s hand. They should look at their cards, but keep them hidden until played.

Third, set the rest of the deck face-down in the middle of the playing area. This is the draw deck. Leave room for a discard pile.

That’s it for game set up. The player left of the dealer is the first player.

Showdown! is played in turns. A player’s turn is summarized here.

The first thing a player does on their turn is draw the top-most card from the draw deck and place it in the discard pile, face-up. If the card reads “When this card is on its way out”, it should immediately be resolved before continuing to the player’s next turn step.

Note that a duel cannot occur on a card flip during this step until all players have had at least one turn. If there are no cards left in the draw deck on the player’s turn, they skip this step and step 2, going directly to step 3.

The player can now take the visible top-most discarded card or draw a face-down card from the draw deck, placing whichever card they take into their hand.

A duel can occur two different ways. The first is when a duel is drawn during step 1 of the players turn. The second is when a player purposely discards a Duel card to the discard pile. The player must immediately decide who they will duel. 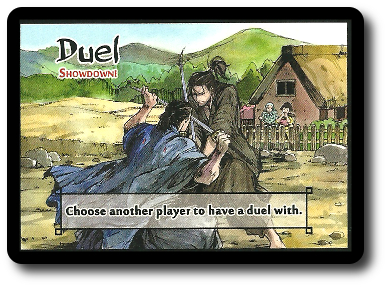 Each player in the duel now plays one card from their hand, face-up, in front of them. A player is limited to playing one Title, one Weapon, and one Notoriety card, if they have or want to play them. Players can also play one card per turn during the duel that reads “During a duel” and any other bonus card that gives a bonus that has not already been played by the player.

Players continue to take turns playing out one card at a time. A player may “pass” on their turn, which stops them from playing any additional cards during the duel. When both players pass, the bonuses on the cards and effects are resolved. The player with the highest calculated value wins the duel. If there is a tie, both players reveal a new bonus card, with the highest value winning and breaking the tie. This continues until the tie is broken. If all the cards are played out, the player who started the duel reveals the top-most card from the draw deck followed by the other player. The values are compared with the player with the higher drawn value winning. All cards played are sent to the discard pile.

If playing against an opponent, losing the duel means you are out of the game. The player who wins draws seven cards and discards two to the discard pile. Discarded cards do not trigger any effects or provide any bonuses.

If the draw deck has been depleted, shuffle the discard pile and place it face-down to create a new draw deck.

The last player standing is the winner. They may continue their journey and hope that fate smiles on them another day.

If the player’s like, they can determine the winner of the game by the number of successful duels won. Instead of being knocked out the game, the loser draws seven cards, keeps five, and keeps playing. The first player to win three duels wins the game.

To learn more about Showdown!, visit the Kickstarter campaign.

The Child Geeks liked that they were playing as wandering swordsmen (or women, depending on the Child Geek), looking for fights. According to one Child Geek, “I don’t know a lot about samurai, but I know I like swords! I liked this game.” Another Child Geek reported, “I liked the game because it was fast and easy to learn. I didn’t like that when you lost a duel you were out of the game.” None of the Child Geeks liked that, as a matter of fact, but a game’s overall length of play is so short that it never really was a problem. All the Child Geeks demonstrated good plays that always resulted in white-knuckled duels. The Gamer Geeks all voted to approve the game.

The Parent Geeks didn’t much care for the game, finding it to be random and somewhat difficult to control. According to one Parent Geek, “I never really felt like I was able to manage my game that well. Random cards didn’t throw me off so much as not having the ability to be more picky about what cards I had. For example, I wanted to desperately get a Showdown card, but I never once got one.” Since cards are always randomly dealt and drawn (except for a discarded card), the Parent Geeks were always left wondering if they had the right cards to win the game. What was never in question was the Parent Geek’s overall level of enthusiasm for Showdown! Half the crowd enjoyed the game enough to suggest it was fun, while the other half preferred to play something else.

The Gamer Geeks found Showdown! to be a letdown. According to one Gamer Geek, “The game’s theme is fine – who doesn’t like swords and samurai? – but it was the game itself that I think needs work. It feels too random and players are never able to really build their deck in a way that makes them deadly. If you win, it just feels like you are lucky. Not skilled.” Another Gamer Geek said, “This is a game I am glad I tried and glad I don’t have to play again. I’d play it with my kids, sure, but never with my peers.” The game also felt out of balance at times, leaving the Gamer Geeks feeling that Showdown! was not a game they would want to play at their gaming elitists’ table.

Showdown! is a rethemed version of Shootout!. This required us to bring in a whole new group of players for this game’s review, since we didn’t want prior experience with the first theme to taint the second. Turned out that it was an unnecessary move, since the reviews we were provided after the games fell in parallel with the reviews we received with the cowboy version. No surprises there.

The game’s theme is always in front of you, but none of our players except the Child Geeks felt they were abstractly swinging a sword. Most of the Parent Geeks enjoyed the game’s thematic feel, but when it came to the actual game play, the majority of the Parent Geeks also felt like any thematics took a backseat to make room for the quick card plays. Never to a point where the gamers felt out-of-place, but it was noted enough times to deserve a brief mention here.

As for me, I didn’t like or dislike the game anymore than I did its cowboy counterpart. This is really little more than the same game, but with swords instead of guns. Terminology has changed a bit, but the cards more or less do the same thing. The game play isn’t different, either, which crushes any chance of a player who didn’t like the first version of the game an opportunity to enjoy the second. Unless you are really into samurai, I suppose. In which case, this game is for you. Goodness, this game is for anyone who is looking for a fast play at their gaming table with friends. Don’t take the game seriously and just focus on swinging as fast as you can, and it’s sure to stab its mark. What it lacks in depth, it makes up for in speed.