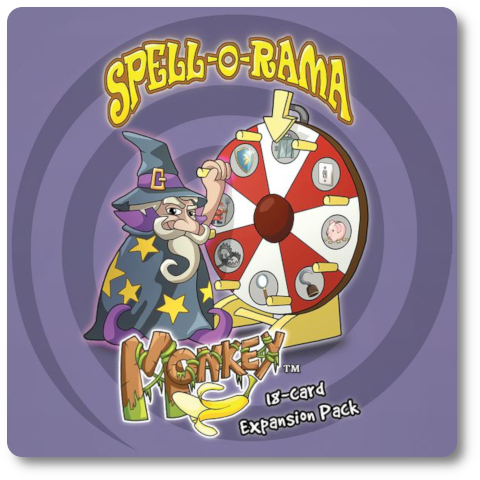 The crazy wizard, Kurgill, is back and he has brought with him a slew of new spells to cause mischief and mayhem. He even brought his mom! Just when you thought it was safe to climb a tree, this expansion adds more falls, traps, and trips to make a monkey’s day on the branch a precarious endeavor.

Monkey: Spell-O-Rama, designed by Rob Gosselin and published by Birdlight Games, is comprised of one Reference card, one Character card, and 16 Spell cards. The cards are as thick and as durable as your standard playing card. Artist Oscar Linder returns and adds more minimal, but colorful, illustrations making this expansion fit seamlessly with the base game.

Note: Monkey: Spell-O-Rama is a game expansion. We will not be describing how to play the base game here. Read the Monkey game review for full details on game play.

A Bit More Monkey and A Lot More Spells

Monkey: Spell-O-Rama comes with a new monkey Character card, allowing a fifth player to join the game. Her name is “Hoopsie”, apparently (according to the game documentation). 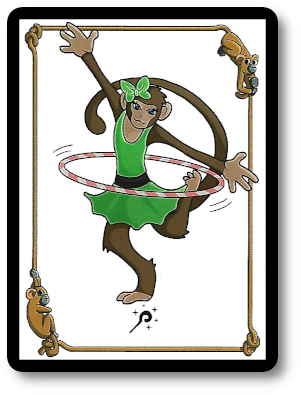 The new spells include the following: 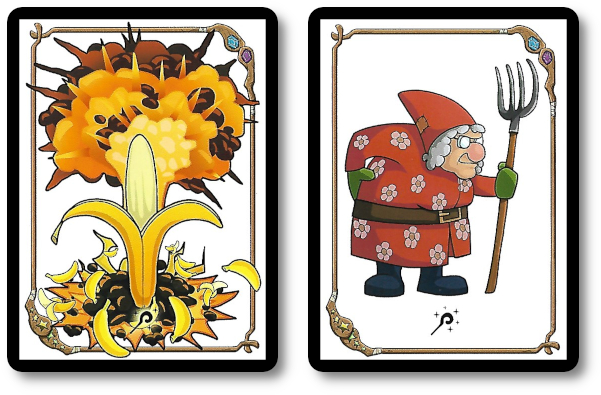 Game play, other than the effects of the new Spell cards, is exactly the same as noted in the base game.

Adding a fifth player, surprisingly, didn’t make for a longer game. The game play is still fast and the level of thought and engagement never shifted. What does change with a fifth player is the number of times your monkey could be kicked around. However, the game designer had the foresight to include the setup rule to remove Spell cards from game play, ensuring the shenanigans that befall your beloved simian are always balanced between actions taken and effects resolved. A nice touch.

If you like Monkey, then this expansion will be well received, but I hesitate to suggest it’s a “must have”. Because the expansion does not build upon the base game, allowing players new pathways to victory, it’s something I would only consider adding to my collection to ensure that my future games always have a random Spell distribution. Which is a good thing. Give this expansion a try the next time you and your fellow monkeys are swinging from the tree.