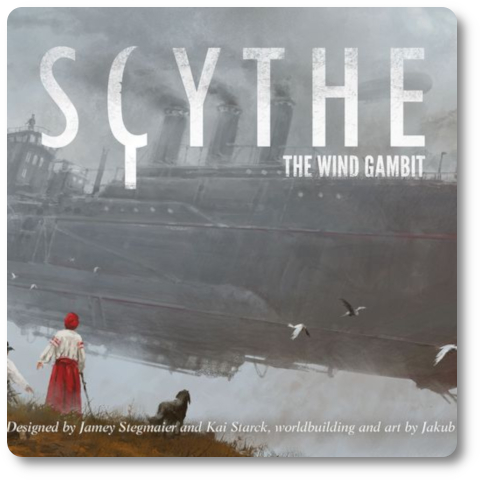 The conflict continues with territory lines being drawn and redrawn as heavy Mechs lumber across farmlands and factories dot the horizon, choking the air with their black smoke. Above the churn of war automation and industry flies the Airship, a steam-powered behemoth that defies the rules of nature and allows man to control the skies. The only question remaining is simple: will this new technology bring peace or more war?

Scythe: The Wind Gambit, designed by Kai Starck, Jamey Stegmaier and published by Stonemaier Games, is comprised of one Achievement sheet, eight Resolution tiles, 16 Airship tiles, seven Airship miniatures, seven Airship stands, and one Automa rule book. This expansion includes two new additions to the game. The first being the Airships and their use and the second being the changes to the endgame. Both can be used together or separately with the base game and any expansion. The production quality is excellent, with thick cardboard tiles and exquisite Airship miniatures that dwarf all other components on the board. Heck, they are big enough to carry the other miniatures for a joyride! 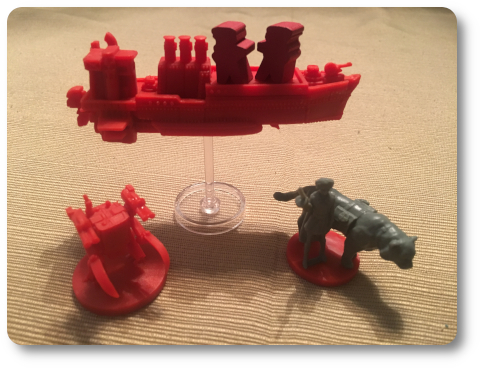 Note: This is a game expansion. To play it, you must have the base game, Scythe.

Scythe: The Wind Gambit is all about the new Airship miniatures. These floating juggernauts in the sky, while terribly threatening in their appearance, are actually gentle giants. Airships cannot control territories (because they cannot attack by default). This allows them to venture into territory controlled by an opponent without kicking up some dust. Furthermore, their movement is unhampered by large bodies of water that stop the heavy Mechs in their tracks.

However, this is a time of war and technology originally built to bridge nations can also be used to destroy them. Each Airship has a “passive” and “aggressive” ability, which are randomized during game set up or selected by the players. By default, all Airships are capable of flying in the sky and holding resources without causing trouble for anyone below, regardless of their faction. Players can change this.

Passive abilities focus on movement and construction. In other words, what the Airships were originally designed for. 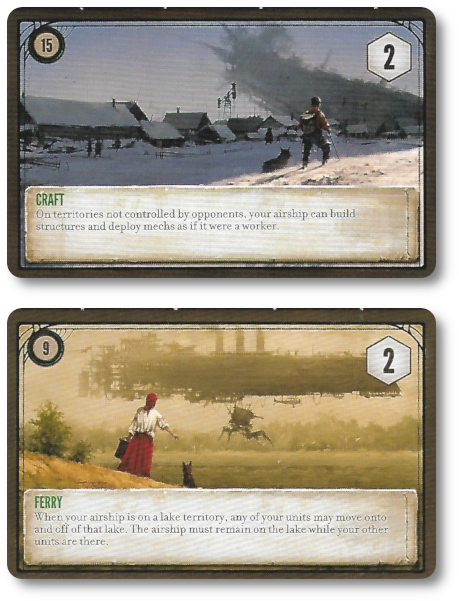 Aggressive abilities change the standard operating mission to focus more on creating havoc for the forces below and even engaging in Airship-to-Airship combat. 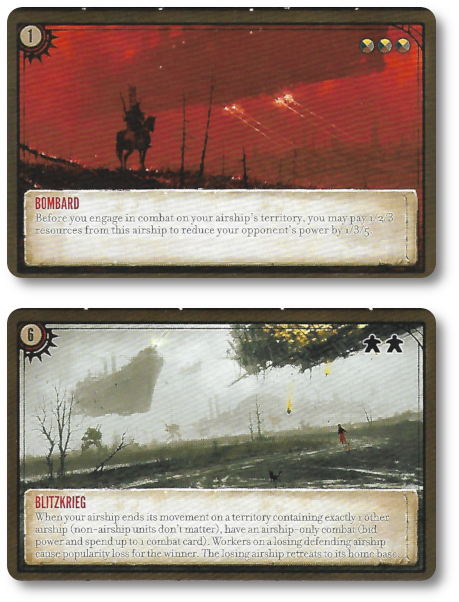 Transportation of three Resources or up to two Workers is a given ability to all Airships, even if they are being used as engines of war. Like the Mech units in the game, they pick up and drop off Resources and Workers before, during, and after their movement. However, just because an Airship is holding Workers and is currently hovering over an unclaimed territory does not mean that the owning player now owns said territory. Remember, Airships don’t control territories, ever. They live in the sky and never touch the ground.

The new Resolution tiles, which can be used or not with or without this expansion or any other expansion and the base game, change how the game ends. By default, the endgame is triggered when any player earns their sixth star. The Resolution tiles change this by being shuffled before the game begins and one is randomly selected. It’s read out loud and placed by the game board so all players now see how the game will come to a close. Of course, players are welcome to handpick the Resolution tile of their choice, further refining how the game is played and the experience they want to enjoy. 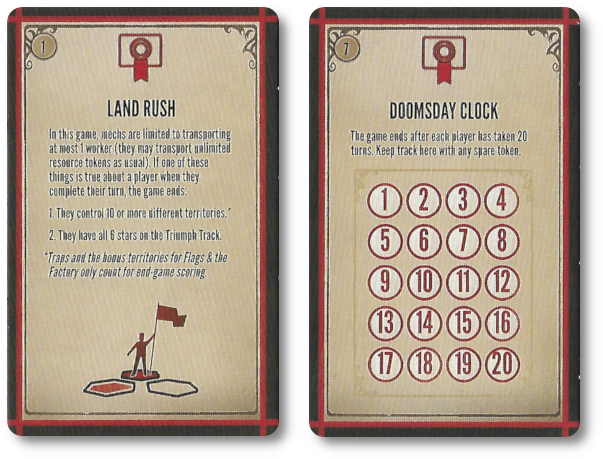 For those of you who might now know, Automa is the name of the AI that a player can compete against if they want to play Scythe as a solitaire game. Automa is little more than streamlined ruleset that makes things easier for a player to manage components on the game board without directing them. I have played against Automa five times now and have won once. I don’t know if that means I suck at the game or Automa is just that good. Either way, Automa and I are not friends…

When playing against Automa, the Airships are aggressive. They are never passive. Players can continue (and should) use their Airship for their passive abilities, as this gives the player a clear advantage against Automa. If the player really wants a challenge, there is an alternative rule that can be added to make Automa’s Airships much more active.

The Resolution tiles can also be used when playing against Automa, although it feels weird to do so. Automa was designed to play the game based on the original endgame condition. The Resolution tiles change what the objective is. However, the path to the goal is still general enough for Automa to find its way to victory before you if you are not playing aggressively. What I have found is that Automa’s actions on the board don’t communicate a drive towards the Resolution tile specifically, but always tend to get it closer to victory than me. Some dark magic going on here…

The Scythe: Invaders from Afar expansion felt like an expansion. It added new twists, turns, tactics, and strategies on a very deep and surface level. All who played it enjoyed it and it made the game all the more complicated and exciting as a result.

The same cannot be said for Scythe: The Wind Gambit.

This expansion doesn’t feel like an expansion. What it feels like is a “we should have included this in the base game” offering. There is no reason not to throw in Scythe: The Wind Gambit into the mix at the very start. The Airships build off of what is already part of the core rules, making them easy to teach, fitting seamlessly in with everything right from the start. Really, all they are is a flying Mech unit without guns, although, admittedly, I am over simplifying them with this statement.

The same goes for the Resolution tiles. A nice addition but not at all necessary. These alternate endgame rules are great for those who have played the game a lot and want a different twist for their ending, but there is nothing included with the Resolution tiles to suggest that they shouldn’t be used right off the bat. All they do is change the shape and distance of the finish line. The rest of the game stays the same.

The question to be answered, then, is if this expansion is worth purchasing and adding to an already big game. The answer is a firm “yes”. Not because you might be a completest, but because the addition of the Airships makes the world in which the game is being played feel more active. They give the player a new way to think of movement and expansion. Like real airplanes that changed how nations looked at the world, the same goes for the Airships. Territories cut off by deep water and hostile forces are now only a flight away. Easier to get to, and as a result, more movement and action on the board.

As for the Resolution tiles, a nice touch, but ultimately unnecessary except for those who want to keep playing the game but are getting real tired of the same ending. The new Resolution tiles don’t make the game any easier or harder, deeper or richer. They are there to change the last page of the story the players already know, concluding it with an interesting footnote. Change is neither bad or good, and in this case, the Resolution tiles offer nothing of genuine value to the game, nor do they detract from it.

A few interesting quotes from our players…

“I like how the Airships are so much bigger than everything else. It is fun to move them around and use them like big buses for my guys.” ~ Child Geek

“The expansion was easy to learn and fun to play with. Having played with it now I want to always use it, but I don’t think it really added more to the game play, but it did make me enjoy the game more.” ~ Parent Geek

“The expansion is nice but I don’t think it is really needed. I’d play with it again, of course, but I think you should just add it to the base game and use it all the time.” ~ Gamer Geek

As for me, I love this expansion. I won’t tell you to “go get this right now”, but I would suggest you keep it on your wish list. It fills a gap, not a hole. It doesn’t expand the game much, but it does extend a players’ thinking when it comes to decision making in the game. It’s the smaller hammer that lets you tinker a bit before you deliver the final blow. It’s, in other words, a nice new addition to an already very complete game. Unnecessary and warmly welcomed.

If you are a fan of Scythe then I doubt very much I need to tell you anything more than “hey, the game has an expansion” and you’re off to your local game store for more info. If you are new to the game or want to play it for the first time, you’ll need the base game first, but do consider this expansion as an optional buy at the same time. Its light rules easily fit into the base game without adding additional weight…except for the components.