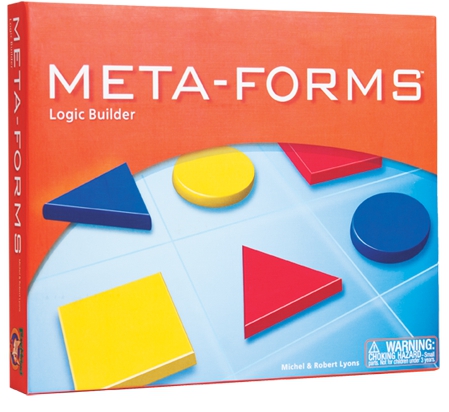 Mixing colors, shapes, and logical thinking, Meta-Forms challenges the player to correctly place puzzle pieces on a 3×3 grid by following illustrated clues that provide all or just some of the information needed. By thinking logically about each piece, deductive reasoning, and elimination, the puzzles can be solved. The more difficult the puzzle, the less information is given, but each piece placed is a step in the right direction. Through trial and error, each puzzle can be solved and the game won!

Meta-Forms is comprised of 1 3×3 grid board, 9 forms (3 blue, 3 yellow, and 3 red in the shapes of circles, squares, and triangles), and 1 puzzle book containing 80 puzzles with solutions. The forms are made out of wood and painted. The grid board is thick cardboard and takes very little space. 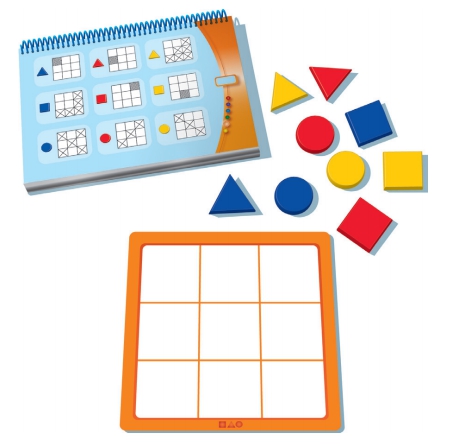 The components of the puzzle game

Remove the 9 forms and set aside. Place the grid board in front of the player. Lastly, select one of the 80 puzzles from the puzzle book. The puzzle book is organized into 6 different levels of difficulty. New puzzle concepts are gradually introduced as the puzzles grow steadily more difficult. This allows the player to improve their puzzle solving skills at their own pace and to adjust the difficulty as they so choose. The first 3 levels of the puzzle book (level 1 through 3), are suitable for little geeks ages 4 to 6-years-old.

Meta-Forms is a logic puzzle that challenges the player to make logical decisions based off of clues that show where the forms are placed. Note that not all 9 forms are used in all the puzzles. The 3×3 grid board is represented in a series of illustrations that show the placement of one of the 9 forms. In the easier puzzles, the form shape, the form color, and the grid placement are given. As the puzzles increase in difficulty, the amount of information becomes increasingly limited, challenging the player to think logically where each of the pieces should go. It should also be noted that the illustrated clues in each of the puzzles are not linear in their placement. Each illustration only represents one of the forms used in the puzzle. The player can therefore skip one of the illustrations if they cannot determine the proper placement of the form in question and move on to another illustration. This is an excellent puzzle solving tactic as it allows the player to move forward, solving easier parts of the puzzle’s whole, which in turn, makes the more elusive clues easier to understand through basic form placement elimination. 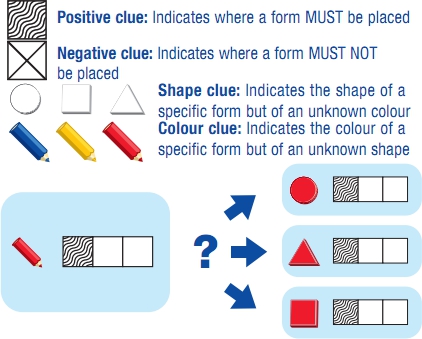 The type of information given in the puzzle illustrations

For more information on the game as well as the full instructions, see the puzzle game’s official web site.

My little geeks continue to enjoy puzzle games, which came as a big surprise to me. They are usually clamoring for their parent’s attention and more times than not gravitate to group games that can take 2 or more players at a time. But since the introduction to such games as Oops!, Architecto, and Zoologic, they have been spending more and more of their time at the game table focusing on the single-player puzzle games. My theory is that they are appealing to the quiet nature of my children as well as being very easy to set up and play just a few games. Little mess or fuss to deal with which allow for quick play and satisfaction.

I must admit there wasn’t much in the way of fanfare when I introduced Meta-Forms to my little geeks. I just told them, “hey kiddos, here is a new puzzle game”. The more games I introduce to them, the less time it takes for me to get them excited. The benefit here is that I don’t have to wrestle them down and drag them to the family gaming table, kicking and screaming, to play a “fun game”. Not that I ever had to do that, mind you. But it does bring to mind an interesting picture.

Meta-Forms is a very straight forward puzzle game, and like all the FoxMind puzzle games I have ever played, they are structured to teach as the game is played out. This works very well on two levels. First, as I have already mentioned, it allows the individual to go at their own pace in regards to levels of difficulty. Second, it makes the puzzle game exceedingly easy to teach, as the different concepts and challenges to the puzzle are introduced over time. Essentially, you can just plop your little geek on your lap, start the first puzzle from scratch, and learn as you go with very little effort.

Once again, my little geeks continue to be excited about games, which in turn, gets me excited. Isn’t being a geek wonderful? Let’s see if the geekiness wears off after a few plays with the puzzles as they go at it solo.

My little geeks have greatly enjoyed Meta-Forms and have played it as often as they do with the other puzzle games. The simple puzzle solving style and very few pieces makes it especially appealing to my 7-year-old who has never much cared for setting things up and even less for cleaning up after himself (we are working on this, believe me). But light in components does not equal light in play. The puzzles in Meta-Forms go from easy to difficult in a gradual pace, but there is a world of difference between them. My 7-year-old can go through levels 1-3 with ease, but level 4 and up started to really stump him. My 4-year-old did well up to the last puzzles in level 3. As for me, well…let’s just say I have yet to complete level 6.

But as frustrated as my little geeks get, they keep coming back for more. Again, I think this is because of how easy the puzzle is to set up and play. Stumped with a puzzle and need to start over? Easy! Just tip the board to clear off the forms and you are ready to go again. Quick restarts means more time playing and less time resetting. A big bonus when you consider that the player is already started to lose their patience. 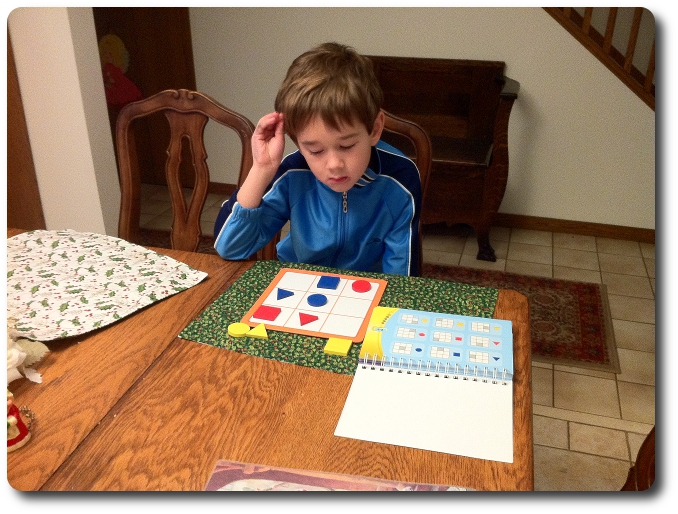 Deep in thought, my little geek was only vaguely aware I was taking a picture

Gamer Geeks, this is a fun solo logic puzzle game, but not what I would consider a “gamers” game. Excellent mental exercises and worthwhile, but falls well short of our criteria to offer it up as Gamer Geek approved. This is not a black mark on the game itself and I don’t think anyone should be surprised. Games tend to be designed and marketed to specific groups. Gamers are part of the fringe on this one, I’d guess, as Meta-Forms provides a mental challenge, which is always appealing to gamers, but does not deliver the rest of what is needed. Kind of like ordering an apple pie, but only getting the filling. Yes, you get some of what you wanted, but not the whole thing. Then again, if you only wanted the filling…

Parent Geeks, this is a fantastic logic puzzle you can share with your little geeks. This is also a great way to introduce and strengthen your little geek’s use of colors, shapes, and following directions. My 2-year-old, who by no means can play Meta-Forms, enjoys looking at the shapes and identifies the colors when his Mom and Dad ask him. This is a great first step and sets the bedrock for all the other Geek Skills going forward. My 4 and 7-year-old are not only strengthening their mind, but also picking up the skills to follow directions and paying close attention to detail. As they play, they learn and have a wonderful time doing so. Educators, take note. Meta-Forms would be an excellent class room activity!

Child Geeks, if you like solving puzzles and want to be challenged without being overwhelmed, Meta-Forms is the game for you! Just follow the clues and victory will be yours! Get stumped with one of the illustrations? No worries! Just skip it for now and go to the next one! Since the game is all about logic, by solving some of the puzzle, you’ll make other parts of the puzzle easier to solve, too! Each form placement is a step in the right direction, even if it might not be in the right spot.

Meta-Forms is a solid puzzle game that delivers. Fun, fast, and challenging, it does all it set out to do. My little geeks keep asking for it and playing it, which is perhaps the best endorsement you can possibly give any game nowadays. With so many distractions and flashing toys, it is something of a miracles that any child would prefer to play a game that takes no batteries or requires 24 hours to charge before it can be used. From a parent’s perspective, Meta-Forms is proving to be an excellent medium to strengthen my children’s cognitive and emotional abilities, while at the same time entertaining. I couldn’t be happier…well, that’s not true. I’ll be happier still when I solve the level 6 puzzles…someday.