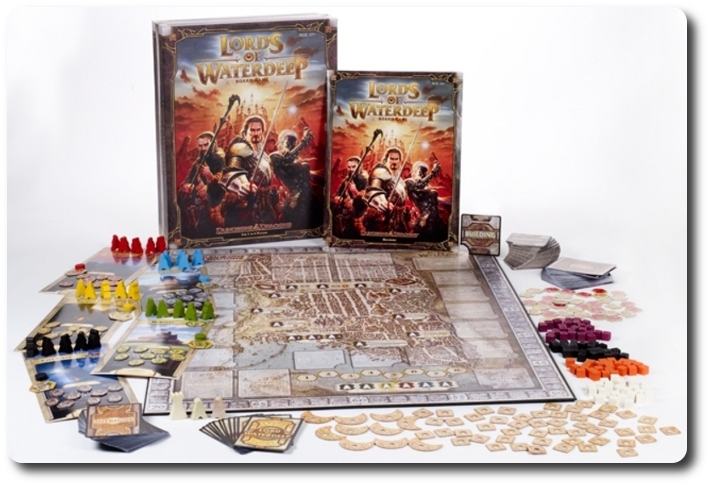 Lords of Waterdeep is a new game from Wizards of the Coast based on the harbor city of Waterdeep in the Dungeons & Dragons world of Forgotten Realms. At its core, it’s an Americanized version of popular European worker placement games such as Agricola and Stone Age. Players take on the roles of Lords and are trying to hire adventurers to complete quests and to expand the city by purchasing new buildings.

The players have agents at their disposal they use to go into buildings and recruit adventurers. The adventurers include rouges, fighters, wizards and clerics. Over the course of the game, the player accumulates Quest cards that require a certain number of adventurers to complete. Upon completing the quests, the player receives awards such as gold, more adventurers, or victory points. In addition, the players can use gold to purchase new buildings for Waterdeep that can provide additional resources to the game.

There’s a lot to the game!

Here’s a quick breakdown of the more important game bits.

These are the cards used by players to accumulate rewards to be used in the game such as additional gold and victory points. Each quest has a requirement of a certain number of adventures before it can be completed. For example, the “Spy On the House of Light” quest requires 3 fighters, 2 rogues, and 2 gold to complete. Once those requirements are met, the player puts the collected adventures back into the supply pile and the gold into the bank. As a result of completing the quest, the player is awarded 6 victory points and 6 gold.

These are the cards that can be used by players to cause twists in the game. To play an Intrigue card, the player needs to assign an agent to Waterdeep Harbor on the game board. Upon doing so, they can play an Intrigue card from their hand. There are many variations of Intrigue cards that can cause other players to lose adventurers or gold, help the player gain additional resources, or even make another player do a mandatory quest before completing any of the other quests they currently have.

These are additional buildings that can be purchased and put into play. Once in play, any player can place an agent in that building and collect a resource. The player that owns that building then also gets a small reward for another agent being there. That reward is based on the building and could be an additional adventurer, gold or victory points.

This is an additional agent that is awarded to a player for completing a special quest in the Quest deck.

This is an additional piece that is awarded to a player for completing a special quest in the Quest deck. The Ambassador is used to block buildings from being used by other players.

The game board is set up on the table with a deck of Buildings, Quests and Intrigue cards. The top three buildings from the deck are placed on the Builders Hall as available buildings to be purchased by the players. Four Quest cards are placed on the Cliffwatch Inn. The Inn is where players can assign agents to take on new quests.

Each player then takes a playmat representing their color of agent. This playmat is used to hold adventurers, gold, available agents, current and completed quests. Each player is dealt two Quest and Intrigue cards. Also, each player gets a random Lord card that is hidden from other players. This Lord card can give endgame bonuses to the player for completing certain types of quests. The first player is then determined by the last person to travel outside of their current city.

The first player places an agent in a building and collects whatever resource that building provides. It could be gold, adventurers, new Quest card, new Intrigue card, the ability to play an Intrigue card, buy a building or claim the first player marker so that player can go first next round. Once an agent is placed, the player has the option to complete a quest. The player to the left then performs the same actions. Play continues around the table multiple times until all agents have been placed. At the end of the round, any player that has agents in Waterdeep Harbor gets to move their agent to another location and collect its reward. All players then collect their agents and continue to the next round.

There are eight rounds in a game and at the beginning of the fifth round, each player gets an additional agent to use for the duration of the game.

After all points are totaled, the player with the most victory points wins.

To learn more about Lords of Waterdeep, visit the games official web site.

Lords of Waterdeep is one of the best new games I’ve played in a long time. While worker placement games are nothing new, Wizards of the Coast have taken a popular genre and put a fresh of coat D&D paint on it. While at its core, quests are the best way to accumulate victory points, by playing Intrigue cards and owning buildings, you can affect others resource collections which in turn can hinder an opponent’s ability to collect victory points.

There isn’t a lot of luck to the game except the quest cards that are revealed at Cliffwatch Inn. Sometimes you’ll miss the opportunity to claim a high reward quest. But if that happens, you can hinder that person that claimed that quest by trying to starve them of adventurers or playing mandatory quests on them.

Lords of Waterdeep is one of those games where your strategy might have to change as the game is played. So it’s important to be able to adopt a new game plan mid-game.

The components in this game are top-notch. All the buildings and tokens are made of heavy stock cardboard and the cards have a textured surface which gives them a high quality feel. In addition, Wizards of the Coast has provided a well designed storage tray to hold all the pieces once the game is done. 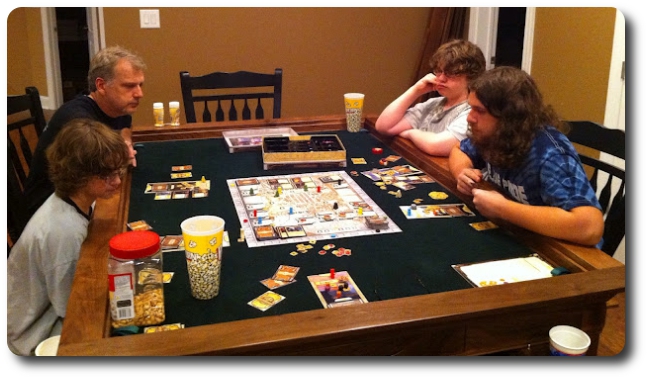 Playing the game - note the intense looks of concentration

Gamer Geeks, this game was immediately liked by my gamer geek friends.There’s enough depth and strategy to keep a player interested. And due to the many Intrigue, Quest and Building cards, there is a good level of replay value to the game.

Parent Geeks, after just one game played with the family, they all were anxious to try it again. My wife, the casual gamer, had no problem understanding the rules and developing a strategy over the course of the game and even won our first game! As such, this is good game for the casual gamer and a great introduction to the worker placement genre.

Child Geeks, my three sons, ages 9, 12, and 15, had no problems grasping the rules. After one round of game play, the rulebook wasn’t referenced once. While my 9-year-old understood the rules, he had a little trouble developing a decent strategy. I think that will develop over time. But child geeks below 8 might lose interest in the game because of its length. In addition, good reading comprehension is needed to understand the Quests and Intrigue cards.

My biggest knock on the game is that, once we got several rounds completed, the theme of the game started to be lost. Over time, we stopped calling the adventurers rogues, wizards, fighters and clerics and instead called them black, purple, orange and white cubes. We also started to gloss over the quest flavor text and just started looking at the quest requirements and rewards.

But aside from that, I’m very pleased with this game. In the multiple play sessions I’ve had, long after we finished we continued to talk about the game, the strategy, what to do in the future, and when we were going to play again. For my family and gaming group, Lords of Waterdeep is going to have some staying power. Waterdeep, City of Splendors, is a city well worth visiting again and again!

One Response to Lords of Waterdeep Game Review