King of the Ring Game Review 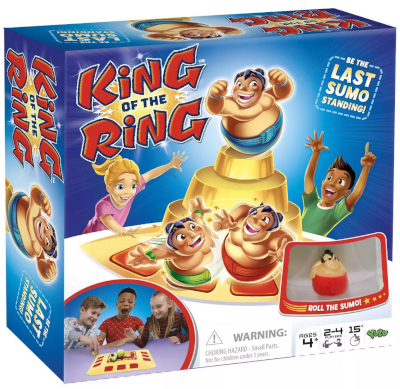 Sumo is a centuries-old form of martial arts that is very popular in Japan and poorly understood pretty much everywhere else in the world. The participants of the sport look very big – and arguably – overweight, but don’t be fooled. These men are professional athletes. Strong, robust, and healthy as bulls. And yet, this martial arts form appears (to the untrained eye) to be little more than two fat guys slapping the bejesus out of each other. Again not the case, but you wouldn’t know it if you thought sumo was anything like this game. Prepare yourself for nonsense.

Prepping for Some Wrestling

To set up the game, first place the Sumo Ring in the middle of the playing area. You will need to use a hard and smooth playing surface. I suggest a floor, as putting the game on the table will mean your Sumo wrestlers will fall on the floor – a lot.

Second, give each of the players a Sumo wrestler in the color of their choice or randomly pass them out. Have the players sit around the Sumo Ring so they are facing one of the four edges (not the corners).

Third, have one person set the spring-loaded timer found at the bottom of the Sumo Ring. After the timer is wound, place the Sumo Ring back to its original position.

That’s it for game set up. Time to see who is worthy of the title, “King of the Ring”!

King of the Ring is played in rounds. Each round, players will take their Sumo wrestler and roll it from their position towards the Sumo Ring’s center. The gameplay is simultaneous. The objective is to move the Sumo wrestlers with just enough force to travel across the distance from the player’s position, up the ramp, and come to a stop in the middle of the Sumo Ring. The metal ball found at the bottom of the Sumo wrestlers lets it travel reasonably quickly, and a lot of finance is needed, as well as accuracy if you want to bullseye the center.

Whenever a Sumo wrestler crosses the center of the Sumo Ring, a pressure plate is released and the timer is triggered. The timer will stop if none of the Sumo wrestlers are on it or have passed through it. In total, the timer is only about 15 seconds long, but a single round can take up to five minutes. It all depends on how fast players are sending their Sumo wrestlers and the accuracy of their aim.

Eventually, the timer will run out. The center platform launches a small tower that springs from the middle. If a Sumo wrestler is at rest at its center, it’s elevated above its opponents. This signifies that the player is not only the winner of the round but also the temporary king of the ring. 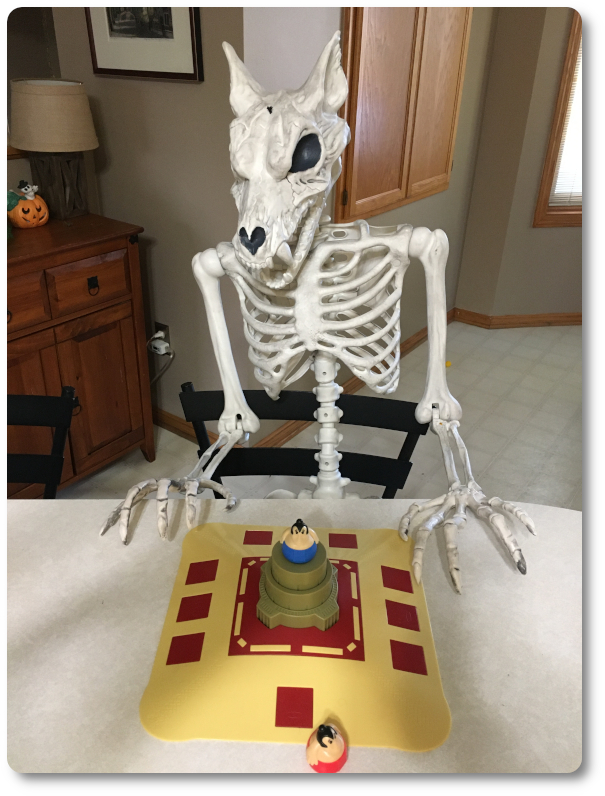 This completes a single round of gameplay. Another round can be played again by rewinding the timer. Play as many rounds as you like. Or as few.

To learn more about King of the Ring, visit the game’s web page.

The Child Geeks enjoyed the game, but not for long. It grabbed their attention; they played a few rounds and then walked away. Much in the same way you’ll find an intense focus from children when they play Hungry Hungry Hippos, only to just as quickly lose interest. While they played it, they had fun. According to one Child Geek, “The game is quick, noisy, and chaotic. It was fun, but I didn’t do much other than keep throwing my sumo guy.” Another Child Geek said, “The game is all about throwing your guy as fast as you can. Don’t worry about aiming.” The Child Geeks’ biggest concern was that the middle tower, once it popped, more times than not knocked off the Sumo wrestler that was on it. Most likely because the Sumo wrestler wasn’t sitting entirely in the center space. This left the Child Geeks feeling a bit cheated, as they knew they had won but were denied the victory display. When all the games were over, some of the Child Geeks liked it, and some thought it was merely OK but didn’t want to play it again. This resulted in a mixed endorsement from our youngest players.

The Parent Geeks found the game to be noisy and disruptive, having no real value other than it was a game their children could take out and play quickly (but seldom put away – am I right, parents?). According to one Parent Geek, “The game’s concept is fun, but its execution is ridiculous. You need to play this on the ground. Don’t play it on a table. Those sumo guys fly off the table fast and hit my walls. No dents, but I don’t want my daughter and her friends thinking it is OK to hurl a toy against the wall.” Another Parent Geek said, “Old school kid game fun. My boys liked it, but I didn’t. Not for me, obviously. It was fun playing with them, but they didn’t want to play the game a lot after they played it a few times. They kind of forgot about it.” When all the games were over, the Parent Geeks didn’t think the game was all that interesting. Fun for the family to a minimal degree and didn’t have much of a future at their family gaming tables. This resulted in the Parent Geeks rejecting the game.

The Gamer Geeks liked the concept but didn’t enjoy the game. Yes, they knew it wasn’t a game for them, and we’ll leave it at that. The most significant grievances the Gamer Geeks had was that the game was not particularly well thought out. According to one Gamer Geek, “This is a game that takes fineness if you want to send your sumo at just the right speed and at just the right angle to land on the tower space. And then it all goes to hell because people are bouncing you off with a quick hit that is all about brute force. Makes no sense.” Another Gamer Geek said, “I know my kids will like this, but I don’t see it being a big hit other than the one time it goes to the table and distracts my boys for a bit. The game exudes no staying power and has the same amount of depth and meaningful gameplay as one can fit into the palm of their hand.” The Gamer Geeks rejected the game.

There are many perks to being an influencer and reviewer in the board game industry. My favorite is meeting people and talking about their games. My least favorite is trying to convince people that the game they are about to play for me is, indeed, a game. I spent too much time doing this with King of the Ring. The only folks who saw the game as a “game,” were the Child Geeks. Everyone else looked at the setup and gameplay and didn’t think it was anything more than smashing things together using an ambiguous timeline as a measurement. Which is precisely what it is. No real strategy to speak of and zero tactics other than making sure you are the last one on the tower before it pops.

This is fine if we consider King of the Ring as nothing more than a child’s toy.

Look, straight up, this is not a game for adults. As an adult, when I was playing it, I didn’t send my sumo hurtling through the air in an ill-fated attempt to land with panache on the center stage until the very end. There is zero need to participate until the last second or two. But, per the game’s design, you have to continually send sumos flying over the center tower to run the clock down. This means that 99% of the game is nothing more than effort with zero gain towards victory. Waste of time. Then in that last second, that last 1%, everything crescendos into what should be a spectacular finish but lands flat on its face. Again, the Child Geeks enjoyed it, but only to a minimal point. The game was just as quickly forgotten as it was set up.

I’ve played better games designed for children that have much longer staying power. If you are looking for a toy that will distract the kids for a bit, feel free to give King of the Ring a try. A game this is not. No victory here, folks.