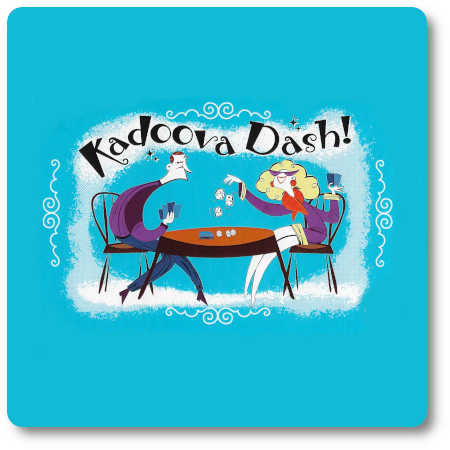 American playwright and screenwriter Tennessee Williams said, “Luck is believing you’re lucky.” In this game, you’ll need to believe that and keep believing it as the dice work for you and against you, random card draws reward you or penalize you, and your opponents do everything they can to slow you down. The only way you will be successful is if you keep your eyes focused on the prize, keep rolling those dice, and think your luck will change for the better.

Kadoova Dash, designed by Jeremy Meyers and published by Pointing Stick Games, is comprised of 84 Dash cards, eight standards six-sided dice (six in white, two in black), one Kadoova die (customer six-sided die), six dry-erase cards, and one dry-erase marker. The cards are as thick and durable as your standard playing card.

Getting Ready to Dash

First, find the dry-erase cards. The game rules suggest that one person be tasked with keeping track of everyone’s score, which is fine but feel free to give each player their own card. Regardless of which approach you take, write each player’s name on top of the card using the dry-erase marker. Then, place any dry-erase cards not used back in the game box.

Second, shuffle the deck of cards and set them to one side of the game playing area. This is the Dash draw deck for the duration of the game. Leave room next to the deck for a discard pile.

That’s it for game setup—role one of the standard six-sided die to determine who goes first and begin.

A House of Cards… and Dice

Kadoova Dash is played in turns with no set number of turns per game. A player will complete several rolls of the dice during their turn and possibly play cards. Players can also play cards during their opponent’s turn if they hold cards. Throughout the entire game, all players will have an opportunity to win and lose points. A player’s turn is summarized here.

Step One: Roll the Kadoova Die

The first thing a player does on their turn is roll the Kodoova die. The die results will either provide the player points (50 or 100) or a number (1, 2, or 3) that signifies how many Dash cards they draw from the Dash draw deck.

Draw and resolve one Dash card at a time. Dash cards will automatically award points or extra dice to the player once drawn. However, they can also cause the player to lose dice and points and lose their turn. Dash cards also give the player additional actions they can take during their turn now or later and opportunities to play cards against their opponent. 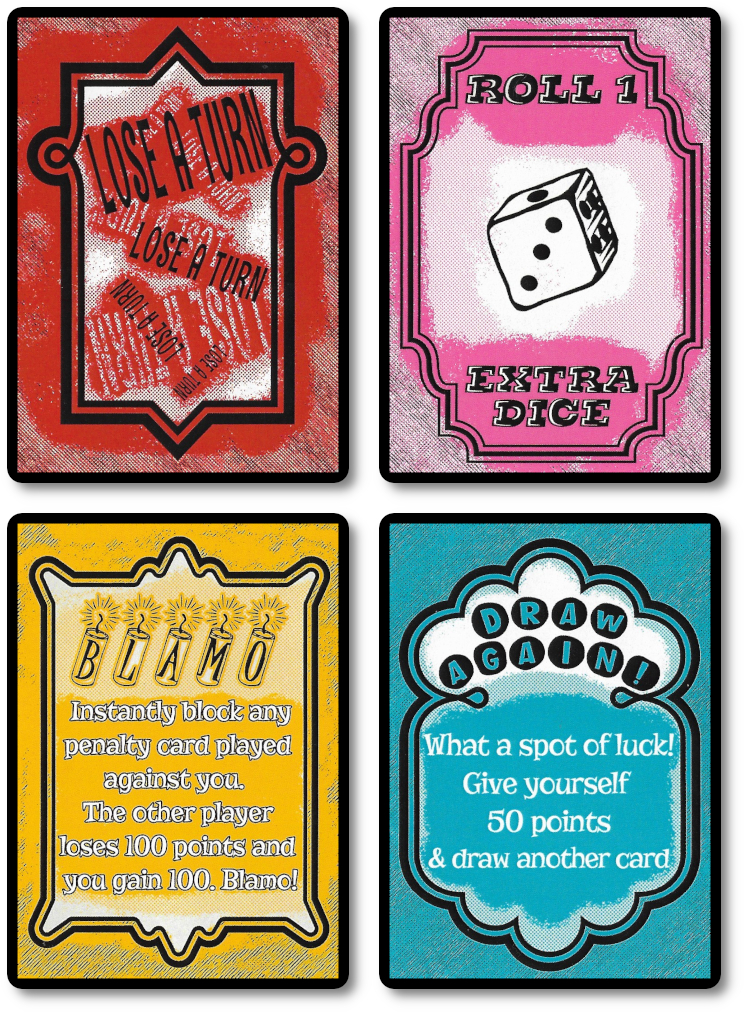 The player should draw the card and resolve it as necessary based on the card details. Most cards will go to the discard pile once resolved, but a few will remain in play for the game’s duration. There is no limit to the number of Dash cards that can be played on the player’s turn (either by them or against them).

If they still have a turn, the player now picks up six of the dice (unless they have a card that says they pick up less or more than the default six starting dice). The goal is to roll a minimum of 350 points. Points are earned by combining dice to create three-of-kind, four-of-a-kind, five-of-a-kind, and six-of-a-king groupings. However, most of the time, the player will count points using the one value (equal to 100 points) and the five value (worth 50 points). There is also a special result referred to as the “Kadoova,” which is three pairs of twos, threes, fours, and sixes. 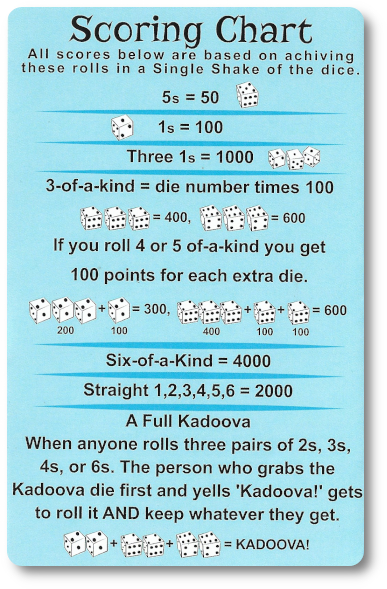 Each roll must result in more points, and a player must set aside one die during each attempt, reducing the total number of dice rolled each time. If the rolled dice results in no points, the player’s turn is over, and they score nothing. However, if the player stops rolling and has at least 350 points, these are added to their score. Of course, there is a Dash card that will allow a player to avoid this scenario.

If an opponent has any Dash cards they want to play during this step in the player’s turn, they are welcome to do so.

This ends the player’s turn. The next player in the turn sequence now takes the Kadoova die and begins their turn.

Luck Be a Lady…

The game continues, as noted above, until a player scores a total of 10,000 or more points. A potential last round is now played. And by “potential,” I mean that it’s possible that the player who triggered this even could now lose points and set the game back to its normal course of turn progression.

Each player now has one final turn to attempt to make as many points as possible. The player with the highest number of points wins the game.

However, if the player who triggered the potential last round is the Dash cards’ target that reduces their total to fewer than 10,000 points and no other opponent scores 10,000 or more points on their turn, the game continues as usual.

The Child Geeks were confused at first at all the dice rolling and when to play cards. They were also frustrated when they didn’t roll enough points to score or other players were able to collect Dash cards when they had none. Since collecting Dash cards and scoring points is determined by a random roll, the Child Geeks had to work through disappointment and feelings of being left out of the game, but seldom. This, as you can imagine, put a damper on the enjoyment the game provided, giving the Child Geeks a “feast or famine” outlook on how the game awarded its players. According to one Child Geek, “You either have a lot of cards or none. You either have a lot of points or a little. I liked the game, but you can be ahead and suddenly not with just a dice roll.” Another Child Geek said, “I liked it because all you had to do is roll dice to enjoy the game. Don’t worry about the dice, and don’t worry about the cards. Just have fun!” Very uplifting and mature thinking for a little geek! All our plays showed that the Child Geeks either liked the game or were fairly neutral towards it.

The Parent Geeks found the game to be silly and random, with not much value in it other than that which provided an opportunity for all to come together at the family gaming table. According to one Parent Geek, “The game was alright. Lots of dice rolling and card-playing if you had any cards to play. I found the game to be chaotic at times and underwhelming.” Another Parent Geek said, “The game is great for the family and provides just the right amount of interaction with the game that gave us a lot of time to visit and laugh together.” The Parent Geeks voted, and the results showed Kadoova Dash had a mixed reception with our casual players.

The Gamer Geeks were not impressed whatsoever. According to one Gamer Geek, “The game is entirely too random. There is no opportunity to think through your moves other than guessing what dice to keep and weighing your odds of rolling more points. I wouldn’t say I like games that result in a player losing their turn. It’s like the game doesn’t want its players to play it at times. A very underwhelming game that I didn’t enjoy.” Another Gamer Geek said, “The game felt too long for two people. Fewer points based on the number of people playing would be better. There is also too much chance involved and zero strategies to use unless you call playing cards at certain times strategy, which I don’t. On the other hand, it’s always obvious when you should.” The result is a game that none of the Game Geeks cared for.

Kadoova Dash offers the players a fast game, but none of it is played in a frenzy. Each turn is pretty straightforward, and the tension grows as everyone gets closer to the 10,000 points endgame trigger. However, there are also times when the game feels like it’s up to its knees in mud and cannot get out of it. Several turns can be played where no points are earned, or only a few players score points, leaving the others behind. I’d suggest there is a balance issue in the game, but that would also mean the game is balanced to begin with. It isn’t. Each turn is randomized, giving each player the same odds as the next player to score no points or some points. That, to me, isn’t balanced gameplay. It’s just random outcomes.

Which has its place, mind you. Games of luck seldom have a healthy mix of strategy and vice versa. But it should also be noted that heaping on random outcomes based on other random results isn’t much of a game for a player who wants to think through their moves, develop a strategy, and execute tactically. Which, again, has its place. There are times when we want to play a game with friends because we have time to kill doing something that doesn’t require a lot of effort. Then there are times when we want to burn our brains playing games that require a lot of thinking.

The gaming industry and the many talented individuals who create games for it have explored just about every corner of the gaming hobby. This gives us – the lucky geeks who enjoy the hobby – a wide variety of ways we can entertain and interact with our fellow lovers of the board, card, and dice games. Kadoova Dash is yet another example of how you can enjoy your time with friends and family. While luck and randomness play a significant role in the gameplay, you’ll find a bounty of fun. Truly a casual gamers kind of game, give Kadoova Dash a try with your family when the opportunity presents itself.