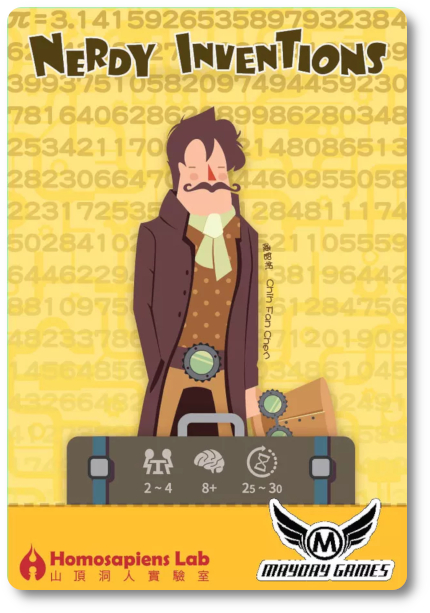 American speaker, author, and toy-maker Roger von Oech said: “Necessity may be the mother of invention, but play is certainly the father.” In this game, players will attempt to create as many inventions as possible using what little tools they have available to them. The more they invest, the more choices they have to invent new things. The game is as much a race as it’s a creative exercise in playing at being the nerdiest inventor who ever lived.

Breaking Out the Tools

To set up the game, first take the Dice Value cards and arrange them in the center of the playing area in a row with the noted values placed from highest to lowest (descending value) from left to right. This is the “Invention Row.”

Second, determine who the starting playing will be for the game. The turn order sequence is now set. Give the first player the “Player 1” Starting Invention card, followed by giving the second player the “Player 2” Starting Invention card, and so on until all the players have their starting invention. This card is placed in front of their owning player and within sight of their opponents. This card also starts a row referred to as the player’s “Laboratory.”

Third, give each player except the first player a Tool card. This is added to the player’s Laboratory.

That’s it for game set up. Let’s get inventing!

Nerdy Inventions is played in turns with no set number of turns per game. Instead, each player’s turn is organized into three phases which are summarized here.

Phase One: Roll Those Dice

The player takes three dice and rolls them. Make sure the dice value results are visible to all the players at the table.

The player has four actions available to them on their turn. They can take as many as they like and in any order. However, each die can only be used once and then is considered “spent.”

Dice have the values of “1” through “6”. The Invention cards list these values using “pips” (black dots) to indicate the needed value of the die. A rolled “6” is considered wild, representing any value the player requires. If the Invention card has a gear symbol, the value needed is the same as the Dice Value card in the Invention Row. Players are not able to add dice values to create new values. For example, a player could not add a “3” and a “2” to cover the requirement of a “5”.

Each Invention card represents one item or tool. The cards show all the information the player needs to know how to build and use it. 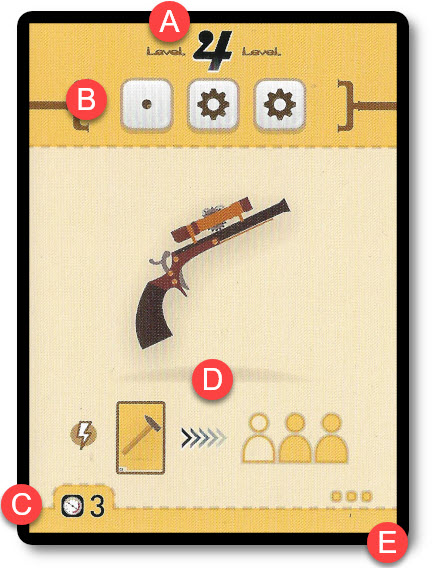 A) The level of the invention, which also determines the cost to recharge it

D) The ability the Invention card provides – in this case, the card gives the player the ability to pass a Tool card to any player who does not currently have one in front of them

Any Invention card the player has in their Laboratory is available to them if it has been charged. To activate a charged Invention card, they need only tip is slightly to indicate it has been used during their turn.

Each Invention card has a unique ability. These range from shuffling the Invention Row, splitting dice values, exchanging cards, and various ways to interact with the competition.

Any dice not spent by the player are considered lost. That is to say; a player cannot “bank” dice values for a later turn. Use them or lose them, folks.

This completes the player’s turn. The next player in turn order sequence now takes their turn starting with Phase One above.

Ending the Game and Victory

The game will end one of two ways.

The first way is when the last card from the Invention draw deck is placed to the Invention Row; gameplay continues until it is again the first player’s turn. After that, the game comes to an end. In this way, all the players have the same number of turns.

The second way is when a player uses the “Airship” Invention card. This gives the player several victory points equal to the dice values used and automatically ends the game, regardless of how many turns the players have had.

Once all the Victory Points are calculated, the player with the highest value wins the game!

The Child Geeks enjoyed the game a great deal, finding each turn an opportunity to use their dice and minds to find creative ways to obtain victory. Since it’s clear how many points a player has, it was easy for the Child Geeks to figure out what Invention cards to go for to earn points. Where they had difficulty, however, was knowing when to use the Invention cards for their abilities. According to one Child Geek, “I like the game a lot. It was easy to learn and fun to play. I don’t know if I was using the inventions right, but you are never really forced to use them if you don’t want to. I mostly just got them for the points.” Another Child Geek said, “You can get the cards for the points if you want or use them to help you get even more points and cards. My dad says it is like building an engine. I think that is right and liked what I built.” When the last invention was built and charged, the Child Geeks all agreed that Nerdy Inventions was their kind of fun.

The Parent Geeks also enjoyed the game, finding it to be casual and relatively quick. Each turn had much to ponder, but the players never felt overburdened with too much to consider. According to one Parent Geek, “A great casual game. It was always fun to roll the dice and then consider all the different ways you could use them. It would be overwhelming if it weren’t for the fact that each die can only be used once. This forces you to think critically, but as you keep playing, it gets easier and easier.” Another Parent Geek said, “I liked it. Fun with my friends and the family. I wish the icons were a bit easier to understand, but the rule book had enough information in the back that summarized the Invention card abilities to make it easy enough to play.” When the airship was released from its anchor, all the Parent Geeks were happy to be on board.

The Gamer Geeks felt the game was pretty “meh,” which is to say, it wasn’t bad, but nor was it good. According to one Gamer Geek, “There isn’t much to this game. You roll dice and use the values or modify them until you cannot use them again. Rise, repeat, roll, etc. Good enough for a filler, I guess, but barely.” Another Gamer Geek said, “If this game is about building your engine and inventing a series of gadgets to make your life easier, it isn’t doing the job. It is too slow and dull. Each turn is predictable in its approach with only the choices – which are never very different – being the only shifting game element other than the random dice values. I didn’t think it was that great.” When the votes were in, the Gamer Geeks gave Nerdy Inventions a pass.

This game is mediocre at best. It has what seems to be great potential but fizzles out almost as quickly as it starts. But understand I say this from my perspective as a Gamer Geek. I wanted Nerdy Inventions to do more, be more, and give us a deeper game. Unfortunately, it never did, even after you start building out your Invention Row. It remains the same level of difficulty, the same level of randomness, and the same energy level. Players get more choices, but the cost is always the same. This means, ultimately, that no matter how many options you have, there is always the limiting factor that keeps you locked at a steady-state, which is excellent for casual gamers but not for those of us who are looking for deeper and more engaging gameplay.

That said, if I were to put on my casual gamer hat as a Parent Geek, Nerdy Inventions was a great filler game and one to put in front of the kids. It’s certainly easy enough to grasp, and the turns go pretty quick. The game can drag on a bit too long at times – especially when playing with younger Child Geeks – but the game does an excellent job of keeping pace with the energy level it creates and expects from its players. That is to say; it maintains a low “hum” that never really accelerates or improves. Instead, it remains as it is with more cards available to the player if they choose—more “stuff” without the burden of more “complexity.”

Nerdy Inventions is not what I would consider a bad game, nor do I see it as a good game. I’ve played it with people who adore it and those who question our friendship because I asked them to play. It’s truly a game that oddly polarized those at the table into groups that love and hate this little dice game. I’m personally in the camp that could “leave it and forget it,” but my kids enjoy playing it, as do some of the more casual gamer adults I know. This tells me that Nerdy Inventions certainly has a place at the gaming table, but not necessarily in your heart. So give it a go and see if this little dice game invents fun at your family table.