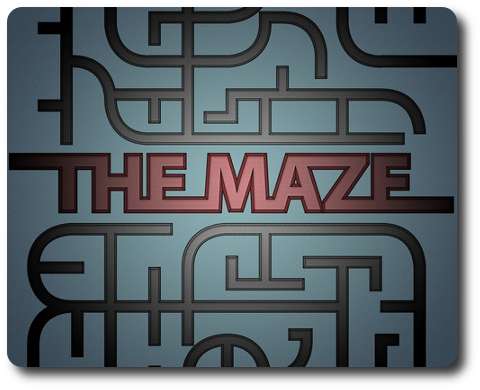 The Maze has become a phenomenon, breaking all other television viewing and rating records. The format is simple: send 4 contestants into an ever-shifting maze and award the first one out a big prize. What keeps viewers glued to the tube is the fate of those who don’t find the exit. Many have gone into the maze, but few have come out. Now it’s your turn to earn that big prize or be lost forever.

At the Gate of the Maze

Second, place the Starting tiles and the Ending tile on the playing area. Their location will roughly determine the dimensions of the maze. The only mandatory rule to follow during this step is to attempt to keep all Starting tiles at the same relative distance from the Ending tile. The dimensions of the playing area (a round table or a small table, for example) will be the primary influence regarding tile placement.

Third, shuffle the Maze and the Cross-Maze tiles together. Randomly begin to add them in an attempt to connect all tiles together with the paths found on the tiles. This is done by placing the tiles adjacent to each other. Leave room between each tile and do not place a tile diagonally. The only rule for placement is making certain the numbers 1 through 6 have at least 1 Maze tile each. Other than that, any configuration is possible and encouraged. Unused tiles are returned to the game box.

Fourth, after the Maze has been created, have each player place their meeple on their Starting tile.

That’s it for game set up. Time to run the maze.

The Maze is played in rounds. A single round of game play is summarized here.

The players who rolled numbers that were not canceled out now rotate all the Maze tiles that match their rolled number. The Maze tiles are rotated clockwise one-quarter turn. The best way to go about this step is to start with the player who rolled the smallest number and continue to the next highest until all players have completed rotating their tiles.

For example, if the player rolled a “4”, they would find the Maze tile with the number “4” and rotate it clockwise by one-quarter turn. This would shift the paths, connecting new tiles and disconnecting others. 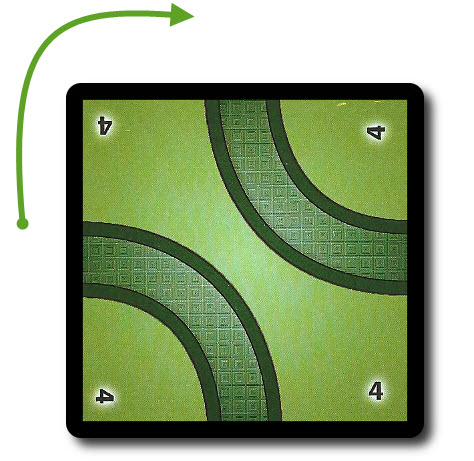 It’s important to keep the meeples on the same path when moving from 1 tile to another. Many tiles will have more than 1 path and the player cannot jump from one path to another.

If 2 or more meeples are located on the same tile, they start to fight each other. Combat is resolved by having the involved players roll their die. The player with the highest roll wins and the losing player (or players) are forced back to the tile they were previously on. It’s possible for this forced move to create another conflict. The conflict is again resolved with the losing meeple moving back to a previously occupied tile until all meeples have a tile of their own.

This completes the round. If no one has reached the Ending tile yet, start the next round using step 1 noted above.

The game continues as described above until 1 player moves their meeple onto the Ending tile. If there is a conflict, it must be resolved. When there is only 1 meeple standing on the Ending tile at the end of the round, that player has won the game.

If a single game of running the maze is too short, players can award the winner of each game 1 point. Then they restart the game and try again. The first player to earn 3 points wins.

To learn more about The Maze, visit the game’s web page.

The Maze proved to be a game the Child Geeks loved to set up and play to a point where all the adults involved became very sick of playing the game. The game frequently served as a filler and was for a long time “the game” of choice for my Child Geeks before bedtime. Why so much popularity and interest? According to one Child Geek, “I really like how the game keeps shifting and changing.” Another Child Geek explained, “The best part of the game is not only figuring out how to get to the center, but to also get the other players lost!” Which is not to say that a player can get lost, but they can certainly be put in a situation where it’s difficult to get to where they want to go. When all the games were over, the Child Geeks enthusiastically agreed to approve the game. 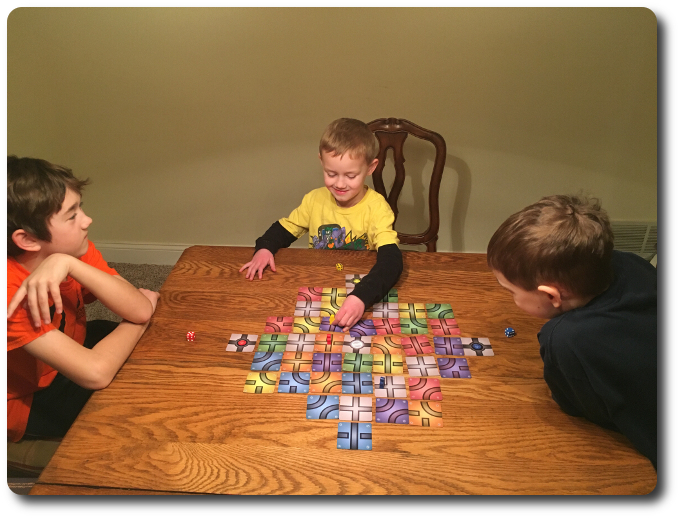 The Parent Geeks found the game to be entertaining with their peers and with their children, but especially when it was a mix of both. According to one Parent Geek, “The game is so deceptively simple that you think you’re going to win immediately, but you can’t. I love watching the other players attempt to solve the maze and make it harder at the same time.” Another Parent Geek said, “I really like the game’s simplicity and using the cards to create paths. Reminds me of Tsuro of the Seas.” With just their peers, The Maze proved to be a casual game that encouraged chatter, light swearing, and eye-rolling as the potions of the maze tiles shifted and rotated. With children, The Maze was an entertaining family game that encouraged problem solving, critical thinking, and laughter. The Parent Geeks loved it and gave the game their full approval.

The Gamer Geeks appreciated what the game was doing, but felt it fell well short of being an interesting game. According to one Gamer Geek, “This game does the same thing as Tsuro, but not in a way that feels unique or superior. The game crawls and I don’t feel like I am running a maze. I feel like I’m sleepwalking through it.” Another Gamer Geek said, “Easy enough set up and game play, but the game itself is fairly weak. Players just move their meeples from card to card. The only time it gets interesting is when 2 or more players are on the same tile, but even then, the resolution and results are uninteresting.” The Gamer Geeks gave the game a number of plays, but the results were always the same. The Gamer Geeks all agreed that The Maze was not a game they would be interested in playing.

The Maze does two things that I kept thinking about while we played. First, it forces movement of all players, but not direction. The player is forced to take a path, but one always of their choosing, unless only 1 path is before them. In which case, they must take it. Second, there is conflict in this game. Sharing a spot, even the end point, initiates a contest. Unfortunately, the fate of the contestants who are in conflict is determined by a random role, but it does create a moment of apprehension and anticipation.

Taken as a whole, this mix of softly forced movement and conflict resolution equates to a subtle requirement to purposely time moves and plan ahead. It’s not a good thing to be on the same space as another player as you no longer have any say about where you are moving to. Additionally, picking your paths is important because you don’t want to get to a point where you are waiting for tiles to rotate. The depth of play, as a result, is deeper than what many players initially believed. Not terribly deep, mind you, but this is a game that takes some thought and planning.

Light and fast, with just the right amount of player interaction and logical thinking, I found The Maze to be the very definition of a great game filler. You can set it up in less than a minute and finishing it in less than 10. Just enough time to play after you order you food and are looking for a way to entertain yourself. Best of all, the game conforms to the playing space available, making it a maze that can fit on any flat surface. If you like games where thoughtful moves mix well with the need to continually reevaluate possible options, do play The Maze. It might very well be a game you get lost in and enjoy.