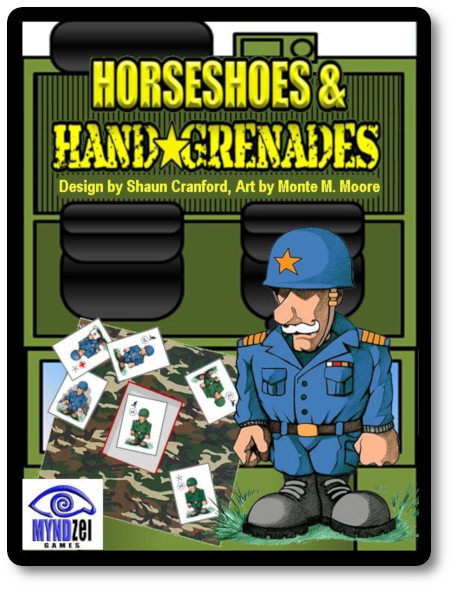 One of the United States’ most respected former basketball coaches, Dick Motta, said “War is the only game in which it doesn’t pay to have the home-court advantage.” In this game of war, where the soldiers the players will command are literally thrown and tossed into the warzone, there is no advantage to be gained. Victory is simply a matter of luck and good timing.

Horseshoes and Hand Grenades, designed by Shaun Cranford and to be published by MYNDzei Games, will reportedly be comprised of 52 Soldier cards and one camouflage bandana. As this is a review of a prepublished game, I cannot comment on the game component quality. The illustrations, provided by Monte Moore, give each card an image of a soldier in a brightly-colored uniform that I guarantee is not standard military issue.

To set up the game, first place the camouflaged bandana on the table as you would a table cloth. This creates the boundaries of the playing area for the game and is referred to as the “playfield”.

Second, take the bottom of the game box and place it in the middle of the bandanna. This is referred to as the “bunker”.

Third, give each player a faction. A faction is defined as all the cards of a single color (in this case, yellow, blue, red, and green, for a total of 13 cards per player). All cards are taken into the player’s hand.

Third, take the top of the game box (referred to as “the jeep”) and give it to the first player.

That’s it for the game set up. Time to go to war!

Horseshoes and Hand Grenades is played in turns with no set number of turns per game. On a player’s turn, they take all the cards in their hand and play any single one of their units. Each unit (Infantry, Medic, Sergeant, General, Evac, Radio, Bomb, and Commando) is meant to land in the playfield. How they get there is dependent on the action symbol found on the card.

Cards also have a special effect (directly below the action symbol).

Where the cards land will contribute to the player’s score. Cards also have two sides. On one side of the card is the image of the faction unit, its Action, and the Effect symbols. On the other side is a picture of the same unit but without these symbols. When this is the card’s facing, it’s considered “injured”. Injured soldiers are considered “healed” if they are connected to the Medic. 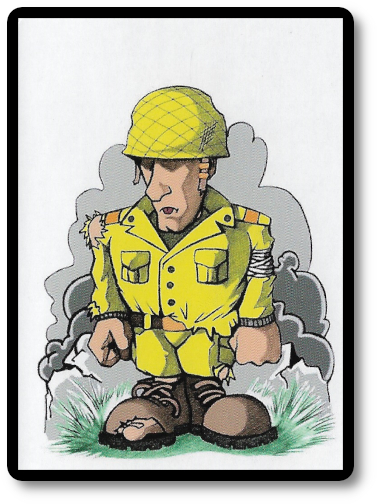 The Bomb card is super special…and destructive. Like the soldier cards, it has two sides. One side shows the bomb exploding, and the other is the same bomb, but it’s a dud. If a Bomb lands on cards in the playfield with the explosion face-up, all cards that are touching it are removed from the game! 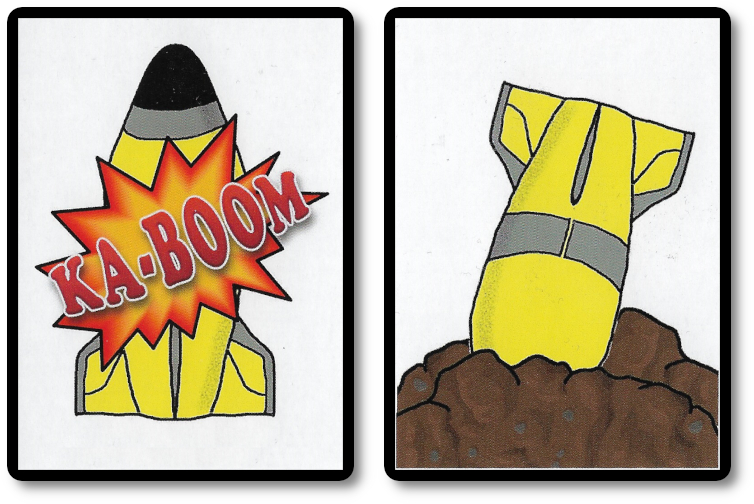 Once all the players have completed moving all their cards to the playfield, each stack is removed, ensuring the face-up side is not changed. A “stack” is a collection of cards that are all touching each other in a continuous group.

When scoring, each player only uses their soldiers. If a stack is mixed (more than one player), the player who scores the most points in that stack gets to keep the score. Each card is scored only once.

The player with the most points wins the game and the war!

To learn more about the game, visit the game’s website or visit the Kickstarter campaign.

The Child Geeks liked the concept of the game but were of two different minds about the gameplay. According to one Child Geek, “I think it is really cool that the cards are played two different ways and that each card does its own thing. Makes each card toss more than just tossing the card.” Which was pretty exciting and appealing to the more experienced Child Geeks who played the game. For those Child Geeks who were not as skilled, the game fell reasonably flat. According to one such Child Geek who thought so, “It is really frustrating when you throw or flip a card and it doesn’t land right or all the other player land on your cards. I never won because I never had any control.” When all the votes were in, the Child Geeks gave Horseshoes and Hand Grenades a mixed endorsement with those Child Geeks loving a good challenge with a fast game giving it high marks and the other Child Geeks leaving it in the ditches.

The Parent Geeks, on the other hand, all had the same idea. According to one Parent Geek, “I don’t want to sound rude, but this reminds me a lot of a drinking game I played in college. Of course, it wasn’t this sophisticated when it came to scoring, but it was just as fun to play then as it was now.” Note that this Parent Geek was not drinking out of a kegger when they played the game. Another Parent Geek said, “A fun and fast game of reflexes and timing. Left me laughing and slapping my head with the palm of my hand. It was a good time.” When all the Parent Geeks were done sending in their soldiers, they evaluated the battlefield and voted that Horseshoes and Hand Grenades was victorious.

The Gamer Geeks were amused for a bit but were eager to end the games. According to one Gamer Geek, “An enjoyable experience if you play the game once. I’d suggest it for a quick filler or just something to do to pass the time when you still want to game but don’t have the mental energy to do so.” Another Gamer Geek said, “A game where all you do is flip cards. You will win if you are more skilled than the other players, but what kind of skill is there in flipping cards? I found the game to be entertaining for a short time and then was just as eager to move on.” When all the games were over and the dust on the playfield had settled, the Gamer Geeks observed the battleground and found nothing to cheer for.

Horseshoes and Hand Grenades certainly does have its charm, but to find it, you’ll need the right people. This is the kind of game you have to take seriously, but not too much. Engage with, but not overly. The gameplay is shallow, but the act of taking your turn is relatively involved. It contradicts itself on several fronts. And you know what? It works.

Here is a game that takes skill to master, but you need to have the mindset that doesn’t take the game seriously. I liken it to bowling. When you play with friends, you feel like a badass when you get that strike and feel like a dumbass when you gutter the ball. But the second you turn around and walk back to your chair, you are over it. That’s Horseshoes and Hand Grenades in a nutshell. When you play it and see the result of what you believed to be your excellent card throwing form, you are either left with a euphoric feeling of accomplishment or a fiery pit in your belly for falling short. And just as quickly as it appeares, it’s gone.

Horseshoes and Hand Grenades was an enjoyable time for me, and I played it several times, which always left me with a smile. Note that out of the ten games I played; I won once. It didn’t matter. Even in defeat, I still felt good about how I used my time. Give this little game of combat and dexterity a try to see if you have what it takes to wage war on your family gaming table.