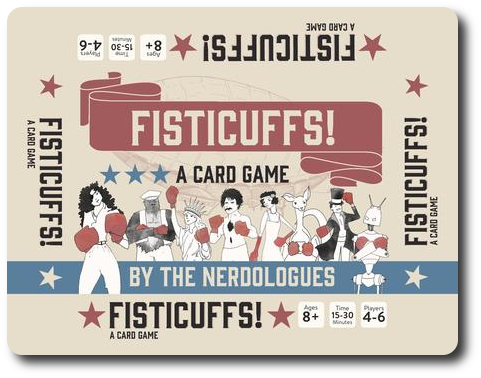 There once was a time where gentlemen fought bravely with clenched fists and menacing bravado. Men were manly and mustaches were large. Go back in time and enter the ring as a pugilistic warrior, making a name for yourself and your fists of furry. But be warned. Once a brawls starts, it takes on a life of its own. Prepare yourself and put up your dukes!

Fisticuffs!, designed by no less than 8 individuals and self-published by The Nerdologues, is comprised of 54 Punch cards, 21 Round cards, 8 Character cards, 6 Health Counter cards, 6 Reference cards, 1 Glove Token card, and 1 Bell Token card. The cards are as thick and as durable as your standard playing card. The artwork by Claire Friedman is quirky and fun, and yet highly stylized in a way that further enhances the game’s theme.

To set up the game, have each player select 1 Character card. It‘s difficult to say if the different characters are well-balanced, as some of them are more difficult to leverage for a victory than others. Optionally, you can just randomly deal 1 Character card per player, too. Place any Character cards not used back in the game box. 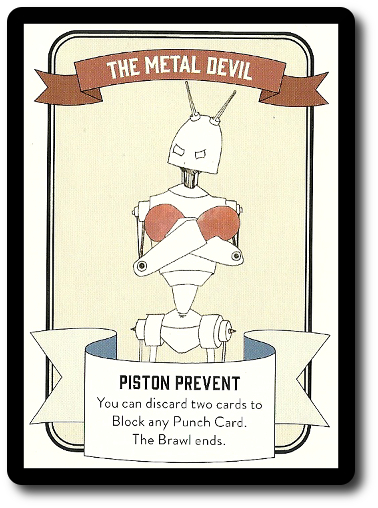 Third, shuffle the Punch cards and deal 5 to each player, face-down. Place the remaining Punch cards face-down and to one side of the playing area. This is the Punch draw deck.

Fourth, shuffle the Round cards and place them face-down and to one side next to the Punch draw deck. This is the Round draw deck.

That’s it for game set up. Determine who will go first and give them the Bell and Glove token. Hand out the Reference cards at this time if needed.

Fisticuffs! is played in rounds and turns, with no set number of rounds per game. A game round and turn is summarized here.

Start of the Round and First Turn

When the round begins, the player who has the Glove and Bell token cards takes the first turn. All players must start a Brawl on their turn if they are able to. This is done by playing a Punch card or a “Rush” Round card. The player then points to the opponent they want to bare-knuckle brawl with. 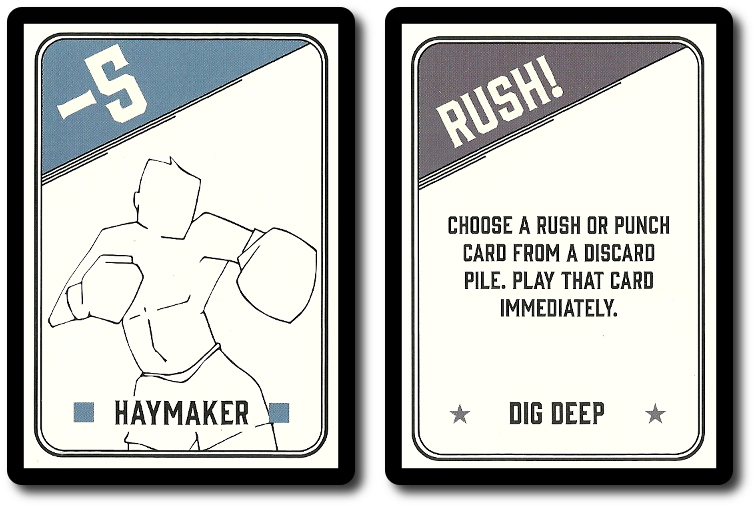 The Punch cards represent the most basic and brutal of attacks, ranging from spitting in your opponent’s face to knocking them down with a mighty haymaker. Each Punch card has a number value that represents how much Health is lost if the attack is successful. In addition, each Punch card will have 1 of 3 different colors (yellow, blue, and red).

The Round cards represent special moves, like Feint and Parry (as well as Rush), that the player can utilize to buy themselves time or upset the balance of the game possibly in their favor for a very short time. “Parry” and “Feint” Round cards can be played by any player during a fight. The other Round cards are best played when they make the most sense. In all cases, the Round card describes how it can be used. 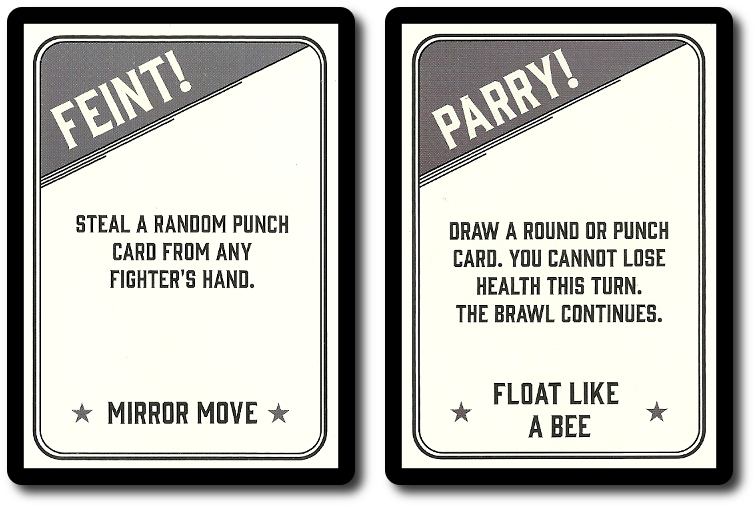 If the opponent can Block, but cannot or chooses not to Counter, they must announce “Towel!”, as well, but take no damage for doing so (as they blocked the attack). Again any player can jump in, but this time they must play to the Block as it was a Counter. The card played must be the same color as the last card played by the opponent who ducked out.

End of the Turn and the Following Turns

The Brawl continues until all the player’s pass. The Glove token is then passed to the next player in the turn order sequence who will begin a new Brawl.

If a player ever begins their turn with no cards in their hand, their turn is immediately over and they are given 1 Punch card. The Glove token is then passed to the next player.

End of the Round and the Following Rounds

The round ends when the Glove token card is passed back to the player who has the Bell token card. Each player who is still in the game is given 1 Round card. Then any player who has less than 6 cards (including the Round card just dealt), are given the appropriate number of Punch cards to bring their hand up to 6 cards.

Then the Bell and Glove token cards are passed to the next player in the turn order sequence. A new round now begins.

There Can Be Only One

When only 2 players remain, the game shifts gears and the two opponents square off in a much smaller arena.

To begin, the Bell token is removed. There will be no break for the two players during the final round.

The Brawl then commences with each player taking turns punching, ducking, and dodging. When a turn ends, the player whose turn it was draws a Punch card and the next turn begins. This continues until only one player’s Character remains standing. The winner is the only player Character still conscious.

To learn more about Fisticuffs!, visit the game’s web page.

The Child Geeks had a real hoot with this game. They found it to be fast, fun, and chaotic, but not to a point where the game was out of control. According to one Child Geek, “You have to be ready to take punches and sometimes you have no way of avoiding them. That’s OK, though, because the games are pretty fast.” Even if a Child Geek’s character did get beat down quickly, they were back in a new game with very little downtime. Another Child Geek said, “I like the game because you never know what to expect and you can bring in people to fight even if they don’t want to.” Very true. More than one Brawl was started with unwilling participants. When all the fists were done flying, the Child Geeks voted to approve the game. 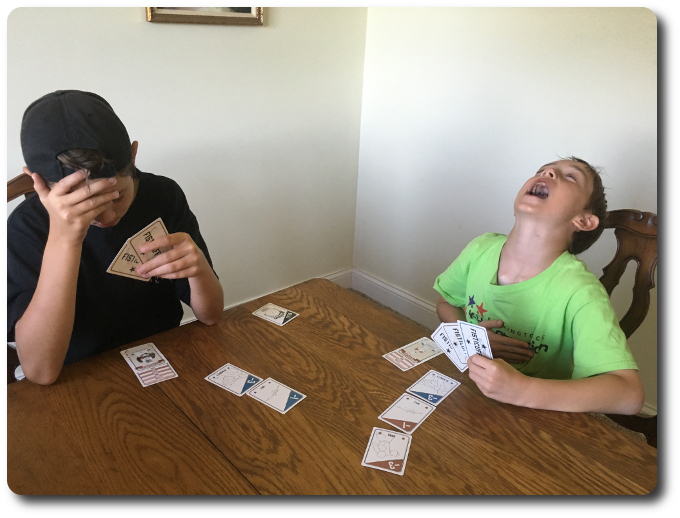 The younger brother lets out a mighty laugh as his older brother takes a fist to the face!

The Parent Geeks enjoyed playing the game with their kids, but found it too chaotic and something of a mess with adults. As one Parent Geek put it, “I can see playing this with my kids, but not with adults. The game is nothing more than a beat down and that’s not much fun.” Another Parent Geek said, “Fast and fun, to be sure, but too much tit for tat for my taste. I don’t think this is a game you can win. This is a game you survive.” Which is the very concept of the game. All the Parent Geeks realized this and gave the game big stars for what it was, but could not agree on if the game was for them. Thus resulting in mixed approval.

The Gamer Geeks were not impressed with the game. According to one Gamer Geek, “Simple number and color matching. Little in the way of tactics or strategy, although there is both to be found. No, I don’t care for the game, even as a filler.” Another Gamer Geek said, “The game has a little of everything – tactics, strategy, risk vs. reward, and even bluffing – but falls short of providing enough to make it worth while.” Which is to say, this particular Gamer Geek found elements of game play they enjoyed, but not enough to make it an enjoyable game. The majority of Gamer Geeks felt the same, finding some real points of merit to enjoy, but not nearly enough to outweigh their general dislike of the game as a whole. The Gamer Geeks rejected Fisticuffs! with out a second thought.

Fisticuffs! is the quintessential filler game. It’s light, fast, and demands very little from its opponents except complete focus for a very short amount of time. Games like this are fun in the moment, but get old quickly in the long run. As long as Fisticuffs! is brought out and played sparingly, I have no doubt it will be enjoyed for a long time. Which, yes, I know sounds fairly negative, but this is not a game that has a lot of staying power.  You play it once and you have played it in its entirety. The game isn’t boring, but it does feel repetitive.

The best aspect of the game is the ability to draw other players into the Brawl regardless of how they feel about it. This elevates the game, in my opinion, from simple card chucking to social eye-poking. If you know an opponent is short on cards or is trying to avoid a fight, sucking them into the Brawl is a great way to not only see an opponent flounder, but also to receive a good tongue lashing. I laughed till I cried many times during the game when an opponent was dragged into a Brawl and just about lost their cool as they played cards and cursed up a storm. Hilarious.

Hilarity and lack of staying power aside, the game has merit, but lacks enough depth to make it a game worth playing frequently or by those who enjoy a game that requires a great deal of deep thought. Fisticuffs! is light and fast, focusing more on action/reaction type of game play rather than long term planning. If such a game sounds like fun to you, get in the ring and give it a try. You might just fall punch drunk in love with it.