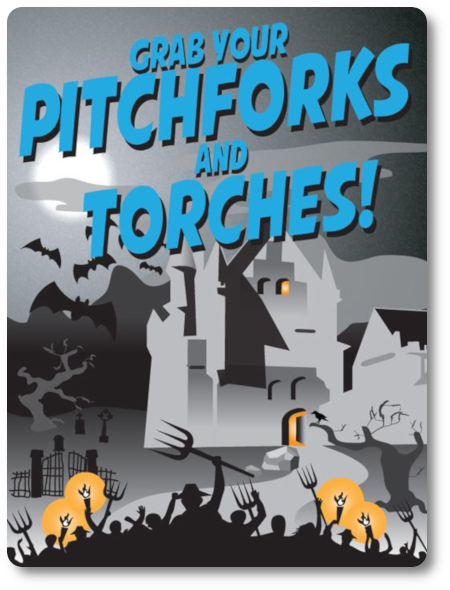 French author and winner of the Nobel Prize in Literature, André Paul Guillaume Gide, said: “There are very few monsters who warrant the fear we have of them.” Not the case in this game! The castle overlooking the village is now occupied by evil. Monsters roam the grounds behind the castle’s tall walls and livestock is going missing at night. Rumors are circulating and fear is growing among the people. Having enough, the local peasantry is taking matters into their own hands. Grabbing pitchforks and torches, they march to the castle’s gates, but will they be ready for what they encounter?

Grab Your Pitchforks and Torches!, designed by Josh Ackerman and published by JAB Games, is comprised of 14 Pitchforks/Torches cards and four Monster cards. The cards are as thick and as durable as your standard playing card (The Game Crafter provides quality products). Mr. Ackerman also produced the card illustrations, which are clean and easy to read. The Monsters are particularly impressive, with a unique style that I rather enjoyed.

The Evil Among Us

To set up the game, first separate the Pitchforks/Torches cards from the Monster cards creating two decks. Shuffle both decks separately

Second, place the Pitchforks/Torches deck face-down and draw the top three cards, facing them face-up in a row.

Third, place the Monster deck face-down and flip the top card over. This is the player’s first monster to capture!

That’s it for the game set up. Determine who will be the first player and begin.

Grab Your Pitchforks and Torches! is played in turns with no set number of turns per game for a minimum of three rounds. A player’s turn is summarized here.

Step One: Fill the Row

If the player has already acquired cards and placed them to their row, they may rotate them to change the card’s active value. In this game, as the card’s name suggests, Pitchforks/Torches cards provide the player either pitchforks or torches. Never both. Depending on the Monster the players are attempting to fight, the player might want to adjust their battle tactics, switching pitchforks for torches or vice versa. Only one card can be rotated on the player’s turn. 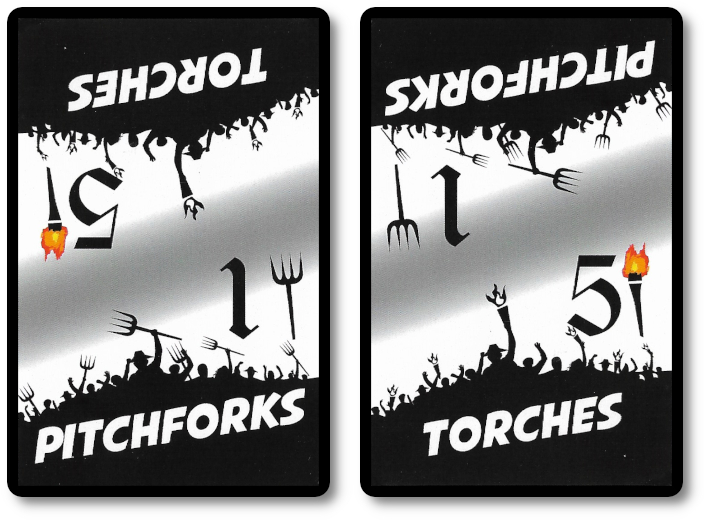 Step Three: Capture the Monster (If You Can) 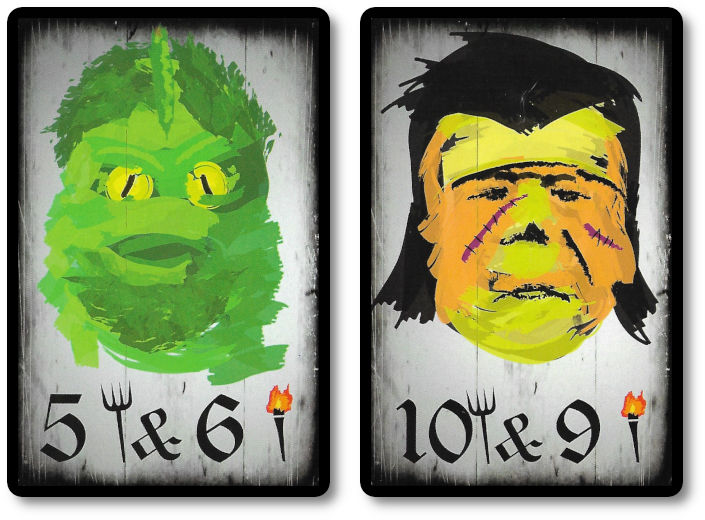 If the player can provide the required number of both types, they have captured the monster! They take the Monster card and place it face-down in front of them. Now the player who caught the monster completes a few small steps.

Of course, if they cannot capture the monster, the Monster card remains and continues to terrorize the countryside.

Either way, this ends the player’s turn. The next player now takes their turn, starting with Step One noted above.

BEGONE WICKED CREATURES OF THE NIGHT!

The game continues as described above until one player has captured three Monster cards. As soon as a player does, the game ends, and that player wins. However, if the fourth Monster card is captured and both players have two Monster cards each, the biggest and badest monster of them all, Drake Kula (so witty), emerges from the shadows! 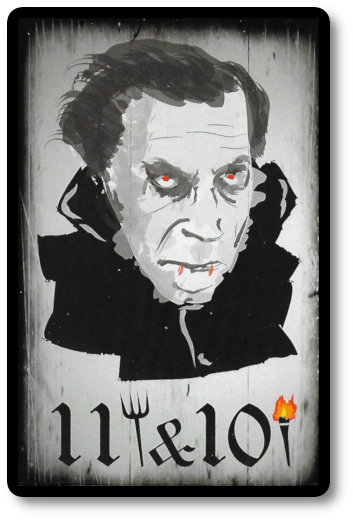 Drake Kula does not have a Monster card. You’ll find this baddy in the game sleeve that holds the cards. Gameplay continues until a player can capture Drake Kula, breaking the tie and becoming the game’s winner.

To learn more about Grab Your Pitchforks and Torches!, visit the publisher’s Facebook page.

The Child Geeks found the game easy to learn and fun to play, stating on several occasions how good it felt to outpace their opponent when they captured the monster. If they didn’t, they weren’t that upset either, since the game is fast to reset and play again. According to one Child Geek, “I liked the game. It was easy to learn, and we played it while we waited for our food at the table. I was only sad that we didn’t get to take on the vampire guy.” Another Child Geek said, “The game is fun to play and fun to watch. You have to be careful, though, not to help any of the players while they are playing. You’ll get in trouble if you do that.” When the last monster was captured and the village once again safe, the Child Geeks all voted to approve Grab Your Pitchforks and Torches!

The Parent Geeks also found the game to be entertaining. According to one Parent Geek, “A small game that is easy to fit in my bag and play with my friend at the pub or with the kids at the table while we wait for whatever we are waiting for. It takes very little space and very little time, but always delivered a lot of fun.” Another Parent Geek said, “Good stuff. Like the size of the game and its speed. Easy to teach – takes only about two minutes – and easy to enjoy. I would recommend it to both families and adults.” All the Parent Geeks found Grabe Your Pitchforks and Torches! to be a good game at their kitchen table and on tables abroad, as the game was easy to travel with. When the night ended, and peace returned to the village, the Parent Geeks gave the game their full approval.

And that’s where all the love for the game ended. The Gamer Geeks were not enthralled with Grab Your Pitchforks and Torches! in the slightest. According to one Gamer Geek, “All you are doing is grabbing a card and adjusting its value again and again and again. The only time you have to think about something is when you draw a new card, but you don’t get to do that until your next turn, so you always feel like you are a turn behind.” Another Gamer Geek said, “I like the concept, but the game fell flat for me. I could play this over some beers, and I would probably enjoy it, but a game you can only enjoy with alcohol or at a restaurant doesn’t sound like a big winner to me.” None of the Gamer Geeks felt that Grab Your Pitchforks and Torches! was a bad game. That’s important to note. Their final vote – which was full rejection of the game – was focused more on the game’s overall hook for the gaming elitists. Which, as the Gamer Geeks suggest, the game has none.

Grab Your Pitchforks and Torches! isn’t going to win over any of our gaming elitists, but it certainly found a place in the hearts, minds, and imaginations of our Child and Parent Geeks! It was a lot of fun watching them play the game, but even more so when their shouts of joy or groans of dismay made the folks at nearby tables sit up and take notice. More than once, I was interrupted by passersby, who wanted to know what we were playing.

The game itself is very straightforward. The Gamer Geeks have a point here, and I agree that it’s not a game that would hold the interest of most elitists for very long. Its simple execution and goal can be written on the back of a cocktail napkin and explained with finger puppets. It’s just that easy to learn. Winning is a mix of simply thinking ahead and easy addition. Some found the game a bit “mathy” at first, with emphasis on counting numbers rather than enjoying the monster hunt. This feeling quickly went to the wayside when the players got into the gameplay and tried – as soon as possible – to be the one to capture the monster.

My only beef with the game is that the path to success never changes. Once you learn the game, that’s as far as you can go with it. Nothing to explore as the game’s depth could be measured with your fingernail. But this plays to the game’s favor, as complexity and depth are replaced by speed and tactical card shifting. A bit of a gamble that could have resulted in a very dull game indeed, but in this case, the gamble paid off.

Do try Grab Your Pitchforks and Torches! when time permits. I think you’ll find storming of this castle to be well worth your time with minimal effort required.