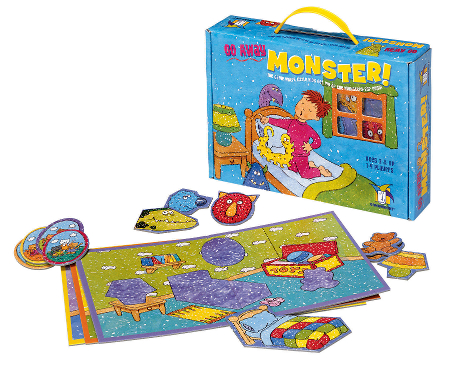 Go Away Monster! is a  very simply game where your little geek and you get to build a bedroom and banish the monsters that live under the bed, in the closet, and in the darkest, deepest corners. There are two versions of game play: cooperative and competitive. The game itself is comprised of a player’s game board (which represents their bedroom), a bag, and small cardboard cutouts of  beds, pictures, lamps, teddy bears, and, of course, monsters.

The setup, regardless of which version of game you are going to play, is the same.

In the bag, you place 1 bed, 1 lamp, 1 teddy bear, and 1 picture piece for each player. For example, if you have 3 players, you’ll place 3 beds, 3 lamps, 3 teddy bears, and 3 pictures in the bag. Extra pieces are not included in the game; set them aside. Regardless of the number of players, all the monsters go in the bag.

That’s it for setup; let’s get to the game!

If you are playing the cooperative version of the game, each player takes a turn blindly pulling out one piece from the bag at a time. The goal is to “feel” for a piece that is shaped like the missing furniture in the room. If the selected piece is furniture, it is either placed in the player’s room or passed to another player if that piece of furniture has already been claimed. If it is a monster, the player is enthusiastically encouraged to yell, “GO AWAY, MONSTER!” and then either place the monster aside or throw it across the room. Each player only gets one pull from the bag regardless of what piece they grabbed. The game ends when all the rooms have been filled with the missing furniture.

If you are playing the competitive version of the game, which essentially makes the game a race, you select a single piece from the bag on your turn and place it in your room, but instead of giving an already claimed piece of furniture to another player, it is placed back in the bag. Monsters are treated the same as in the cooperative version of the game. Each player only gets one pull from the bag regardless of what piece they grabbed. The winner is the first player to fill their room with the missing furniture.

It should also be noted that this game can be played solo by your little geek with little to no difficulty. If your little geek chooses to do so, he or she will be using the cooperative rules of the game. The game rules do not specifically say this, but it is more or less implied.

Go Away Monster! is the perfect game for your very young little geeks. It is simple to play, allows for fun interaction, and there are plenty of opportunities to teach and learn from each other while playing. But do not expect this game to be played long. If your little geeks really like playing games, you and they will soon grow bored with Go Away Monster!, as it doesn’t provide a lot of replay value or challenge.

I received this game as a gift, and a thoughtful one at that. The individual who gave it to me was part of a Secret Santa Gift Exchange through the Dice Tower guild on Board Game Geek. My Secret Santa knew very well that I had little geeks and gave me this game, I am assuming, because he thought my kids would enjoy it. And he was right, but the level of enjoyment lasted only 4 games.

In a word, the game is too “simple”. The mechanics are not overly challenging and the game lacks meaningful depth. Yes, I am asking a lot from a game specifically designed for an age group that has just recently graduated out of diapers, but I can’t help it. I am a bit spoiled as my sons enjoy more interesting and complex games.

I don’t want to paint Go Away Monster! as a “bad game”, because it certainly isn’t. It is just a very simple one. This game is great for early childhood development and is easy to learn and play. Regardless of age, your little geek will pick it up fairly quickly and fun times will be had by all.

I also recommend this game for parents who have children with early auditory, visual processing, language, and motor difficulties, as well as for teachers and educators who have students between the ages of 2 and 4. Bright colors, durable pieces, and easy game play will make this a hit in the classroom and a welcome alternative to the everyday-boring-building-blocks.

You are no doubt asking yourself by now why I stated that this game was neither endorsed by Father or Child Geek, despite the fact that I just said so many nice things about it. It comes down to game play. My two oldest sons (ages 6 and 3) learned how to play this game, played it, and then left it. This game gets no love from them whatsoever. It has been forgotten and tossed to the side like a broken toy. For the brief moment it was in their lives, they enjoyed it, but it was all too quickly forgotten. To me, that means the game wasn’t really all that big of a deal to my sons. Thus the rejection. Sorry, monsters.

But fear not, oh Horrid Ones! I have a 1 year old who is working his way up the geek ranks (already shows a surprising love and interest in Transformers and dragons!), which means Go Away Monster! will be brought back from exile at least once more in the near future. Until then, I will keep it on the shelf with the monsters safely tucked away in the box.