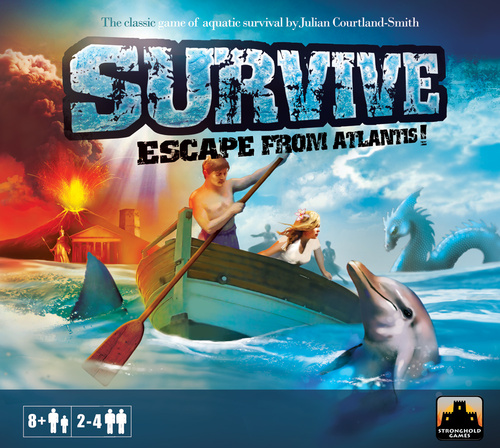 Survive: Escape from Atlantis! is a Stronghold Games reprint of the Parker Brothers 1982 game Survive! The object of the game is to be the player who scores the most points by the time the volcano tile is drawn from the island. Each player’s “meeples” have a number printed on the bottom of them. Players add up the numbers shown on the bottom of their meeples that make it to safety on the each of the four surrounding islands. The player with the most points wins!

The game consists of the following:

The game also came with some additional components for use in an optional play mode not covered in this review:

The game is ready to play. In this game, players perform the following actions on their turn:

As you can see from these actions, the players not only control their meeples, they also get to control the creatures! Meeples knocked from their boats due to a whale collision or the direct results of the island sinking become “swimmers”. Careful! Swimmers immediately become a possible lunch for a nearby shark!

Players using efficient and somewhat lucky choices with a dash of sound memory skills have a good chance of winning the game. 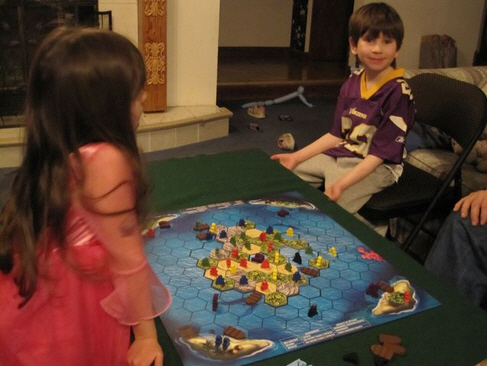 Daddy is in the lead, but his three opponents are to be sure to change that at all costs!

Using the basic rules supplied in the game, Survive: Escape from Atlantis! was simple to play for my soon-to-be 7 year-old son. My 4 year-old daughter needed some assistance selecting optimal choices, but she was able to carry out the four actions with not much problem after a few turns.

The game starts out as a memory exercise. Players need to remember where their highest-valued meeples are located on the island and try to get those to safety first. However, I personally can’t say I remembered much other than where my “6” value meeple was after they were placed. While it is important for getting the best score, all I can say is “good luck” memorizing all your meeples!

Risk & reward as well as critical decision making also come into play. As the age old adage goes, one should not “put all their eggs in one basket”, or in this case, “meeples in a boat”. If the player places all their meeples in the same boat, they risk loosing many points if the boat is capsized or and the meeples eaten by a sea serpent! Of course, the player could inefficiently send their meeples one-by-one to safety, too. Safe and slow or reckless and fast?

Strategy and tactics come via meeple movement in addition to creature movement. In my games, the Kids’ strategy was to keep Dad low in the survival count and use the tactic of moving the sea creatures in my direction to take me out. Grandpa was also against me here, so needless to say, I had a fair amount of creatures headed my way!

Emotional coping skills are needed and tested in this game. This provides you with a wonderful opportunity to work on this skill with your little geeks while not actually getting wet..or eaten. Making creature noises to taunt the other players underscore this lesson! Have no fear parents, I kept the taunting light and the Kids (and Grandpa) had fun doing it to me as well. This provided all a great opportunity to laugh along with each other and provide an example of good sportsmanship. 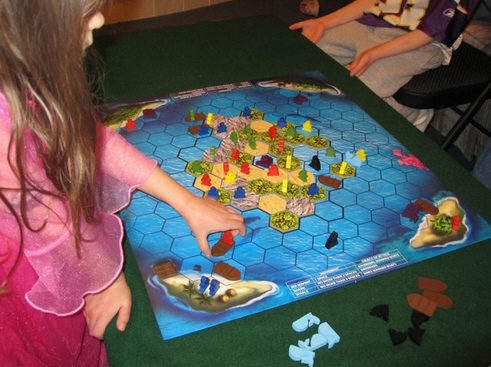 Survive: Escape from Atlantis! is one of my kids favorite games right now. They have asked to play it several times since we played it over Superbowl weekend (Go Packers!). The components are well-made and of high quality. From the chunky tiles to the wooden playing pieces, the game is a pleasure to look at as well as play. The rules were easy enough to learn and teach. Additional rules are available to add higher levels of complexity and variation if adults find the base game too simplistic.

My father-in-law, my kids, and I had a blast with this game! Pick it up, if you dare!

One Response to Survive: Escape from Atlantis! Game Review