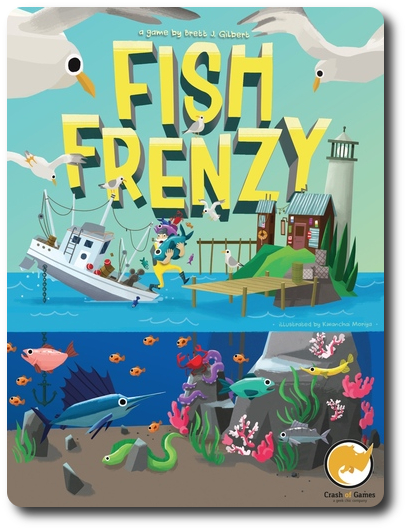 For the men and women who have spent their lives, if not generations, fishing the waters of our oceans, nothing is worse than a freeloader. The seagulls will bother a fishing boat like a fly bothers an elephant’s ear. Constantly circling and attempting to grab a fish, seagulls are disliked as much as a stormy sea. But little do the fishermen know how good they have it, as a seagull’s life is hardly easy.

Fish Frenzy, designed by Brett J. Gilbert and published by Crash of Games, is comprised of 5 Seagull tokens (in 5 different colors, 1 per player), 40 Little Fish tokens (in 5 different colors, 8 per player), 1 Boat token, 80 Fish & Crab cards, 10 Goal & Event cards, and 5 Captain Boat boards. The game component quality is excellent. The Seagull and Little Fish tokens are made of wood and the Captain Boat boards are nice and thick. The cards are as durable as your standard playing card. The illustrations by Kwanchai Moriya are bright and colorful, with simple shapes and clean lines.

Get Ready to Fish 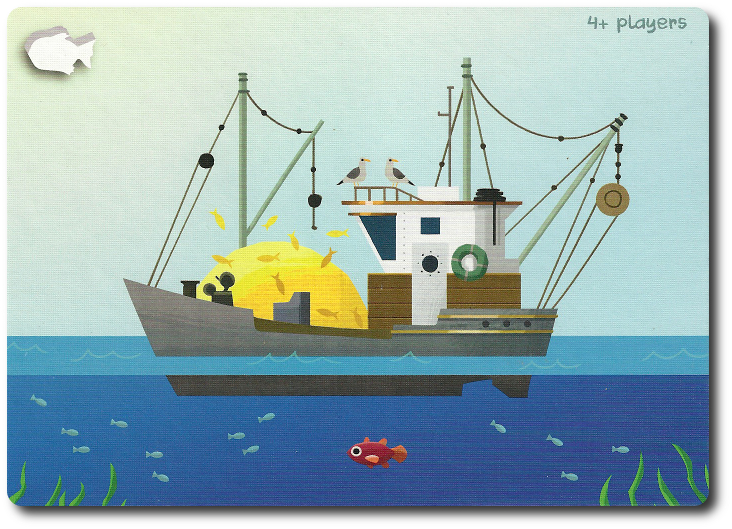 That’s it for game set up. Determine who will be the first player and hand them the Boat token.

If Wishes Were Fishes…

Fish Frenzy is played in rounds with no set number of rounds per game. A round of game play is summarized here.

The first player places their Seagull on any Captain Boat board they like.

The next player in turn order sequence now takes their turn. Each player’s turn after the first player has two possible outcomes.

If No Other Player Occupies the Captain Boat

The player places their Seagull token on an empty boat. The boat is theirs – for now – and the player need not concern themselves with their opponents.

If Captain Boat Already Has a Seagull

The opponent who was bumped must now find a new Captain Boat to land on that is Seagull token free, go challenge another opponent, or challenge the player to take the Captain Boat board back. This could cause a number of action/reaction turns. However, the current player’s turn ends when they either land their Seagull token on an unoccupied boat or an opponent does when they are kicked off another boat.

After all the players have had a turn, the next step in the round begins.

First, move all Little Fish tokens currently on the Captain Boat boards back to the general supply.

This action allows the player to take all the Fish & Crab cards underneath the Captain Boat board and then organize them into matching sets in front of them. This shows the player’s opponents how many of each card they have. Fish cards come in different colors and will count as points. Crab cards will cost the player points. 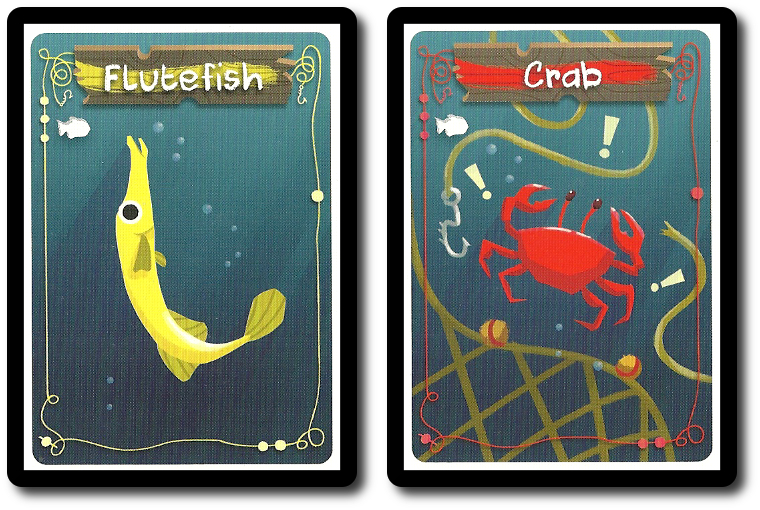 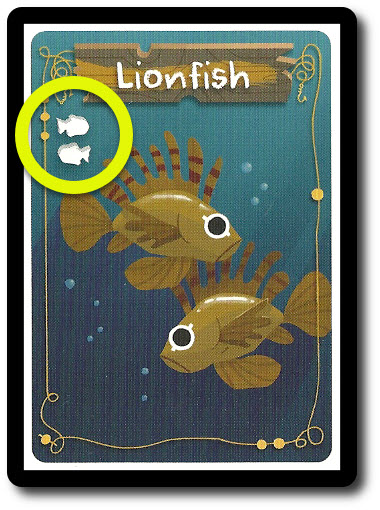 After each player has sorted their catch underneath the Captain Boat board they occupy, the round ends. If the draw deck is depleted, the game has ended. Otherwise, a new round now begins. Leave any unclaimed Fish & Crab cards underneath the boats. The Boat token is then passed to the next player in turn order sequence.

The fishing boats now go out again to bring in their catch, much to the joy of the hungry seagulls.

End of the Fishing Season

When the draw deck is found to be depleted at the end of a round, the game is over.

Take 1 of the Captain Boat boards and flip it over to reveal a score board. Each player places their Seagull token on the “0” space. 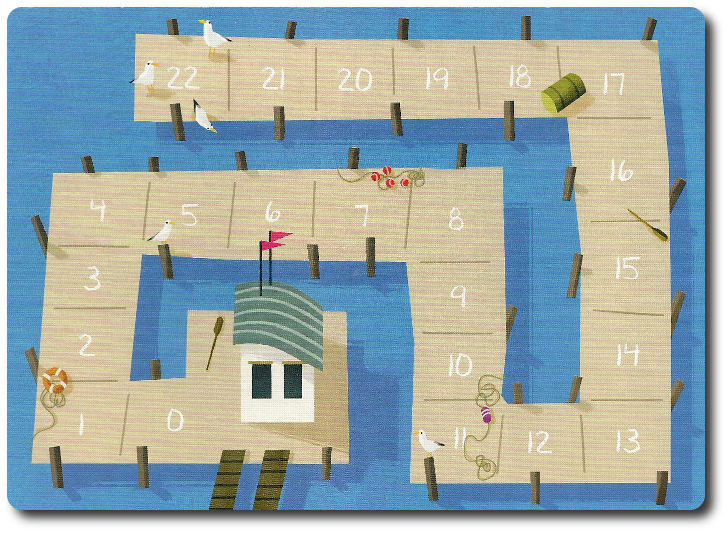 Each player now compares the number of Fish & Crab cards they collected during the game.

Then players count their crabs. For each crab they have, they reduce their points by -1.

When all the cards are scored, the player with the most points wins the game.

Optionally, players can use the Goal and Event cards during their game. Goal and Event cards are always used together, but they are randomly dealt during game set up. The Goal card will challenge all players to complete a certain goal by the time the game ends. If they do so, they earn additional points. 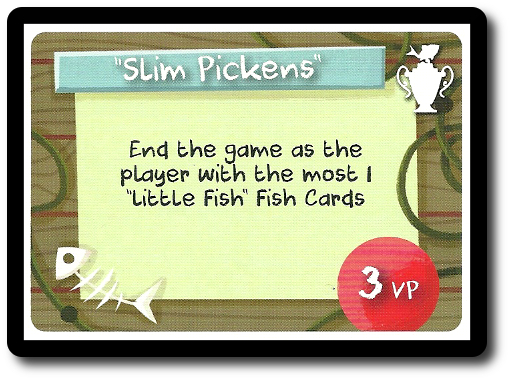 The Event card will impact all the players and changes the game rules. Players should pay close attention to the event, as it will most likely influence their choices during the game. 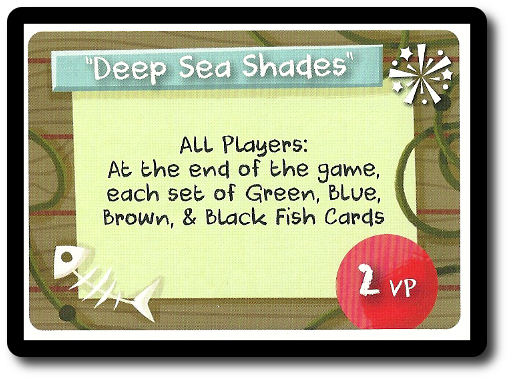 The Child Geeks had a good time with this game, but it was a bit brutal at times. The claiming of Captain Boats turned into aggressive bouts of shouts and sometimes tears, as a few of the Child Geeks thought that other players were purposely picking on them. This turned out to be the case a few times (older siblings can be jerks), but for the most part, this was seen as nothing more than “part of the game”. According to one Child Geek, “You have to play aggressive, but also smart. You don’t want to be stuck with a bad boat.” The Child Geek makes an excellent point. There will be some Captain Boat boards that are not as good as the others. While not terrible to claim, the game’s short length of play makes a bad boat a hurdle to later overcome when you count points. It is, therefore, in the player’s best interest to pursue the best possible boat each time. Thus the aggressive game play. As one Child Geek put it, “If you didn’t come to fish, get back on land.” When the games were over, the Child Geeks all voted to approve the game.

The Parent Geeks were also fans, finding Fish Frenzy to be an enjoyable and interactive game for the family and their friends. As one Parent Geek put it, “An easy game to teach and to play, but wow,  you really have to be aggressive in the game at times. In a good way, though. You need to fight for your fish!” What the Parent Geeks liked most about the game was how much energy it took. Just enough to keep everyone involved, but not nearly enough to make you tired. The only aspect of the game they didn’t care for were the use of Goals and Events, finding them to be interesting, but unnecessary. According to one Parent Geek, “The normal game is just fine. You don’t need to add anything to it.”. All the Parent Geeks voted to approve the game.

The Gamer Geeks were impressed with the game’s presentation, but not the game play. They all agreed that it was a good game, but not for them. According to one Gamer Geek, “A solid family game, but not a game I would want to play with serious players.” Mostly due to the way the Captain Boat boards were claimed. The majority of the Gamer Geeks found this method of control to be too chaotic and annoying to be of any entertainment value. As one Gamer Geek put it, “I don’t like waiting for the game to resolve itself as we keep moving player pieces over and over again simply because of a token value count.” None of the Gamer Geeks endorsed the game for their peers, but all agreed they would recommend it to their families.

Fish Frenzy injects just the right amount of set collecting and chaos to make the game feel a bit like a battle and a race. As the Fish & Crab deck slowly shrinks, players start taking more necessary losses in hopes of big gains. In many respects, the risk versus reward element in the game is lot like fishing. Sometimes you have to risk more than what you would like in hopes of catching something big. Since all the collected cards are visible throughout the game, a player can always see how they stack up to their peers. This helps offset a lot of the stress that comes from balancing risk versus reward, but does little to actually tell the player how to go forward. There is a still enough “unknown” to make a player’s turn one part exploration and one part exploitation.

I very much enjoyed Fish Frenzy, but agree with the Gamer Geeks. This is a family game at its best and at best. There is not enough to it to challenge a serious player, but there is more than enough to keep a family engaged and buzzing from start to finish. The only cautionary note I’ll leave you with is playing the game with sensitive players. Claiming Captain Boats can turn into an uncomfortable exercise if all involved are not emotionally mature enough to be shoved around a lot. Other than that, I believe you will find this to be an enjoyable game. Take it for a spin around the harbor and see if you can catch some fun.