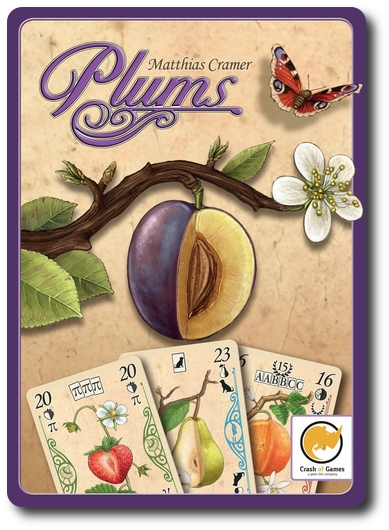 Greek mathematician, Euclid, said “The laws of nature are but the mathematical thoughts of God.” The symmetry of a halved apple suggests a working equation. What we see in nature might be the physical representation of math or the cradle of mathematics as we know it. In this game, math and nature are combined to create a competitive card game where mixing and matching fruit equals big points.

Plums (a.k.a. Pi mal Pflaumen), designed by Matthias Cramer and published by Crash of Games, is comprised of 75 Fruit cards, 18 Plum cards (which, yes, are a type of fruit), 18 Pi cards, 1 Watchdog card, and 7 Turn Order cards. The cards are as thick and as durable as your standard playing card. The illustrations by Dennis Lohausen are outstanding. The fruit depicted on the cards look like they were taken directly from a scientific botany book.

A Walk in the Orchard

To set up the game, first find and set aside all 18 Plum cards, all 18 Pi cards, and the Watchdog card. Put these cards to one side to create a general supply.

Second, separate the Fruit cards by color (red, green, and blue) to create 3 different stacks. From each stack, remove a specific number or number range of cards. The cards to be removed are determined by the number of players in the game. For example, remove cards 19 through 25 from each stack if playing with 3 players. Removed cards are out for the duration of the game.

Third, shuffle each stack separately and place them face-down to create 3 draw decks. Place the draw decks in sequential order (I, II, and III) from left to right. These indicate which round the draw deck is used in.

Fourth, take the Turn Order cards and set down 1 card per player in the game, placing any that are not used back in the game box. Place the cards in sequential order. The highest numbered card should have a small image of a Plum card located on it’s corner.

Fifth, take the first round of Fruit cards and deal to each player an equal number of cards.

That’s it for game set up. Let’s pick some fruit!

A Cornucopia of Fruit

Plums is played in rounds for a total number of 3 rounds per game. Each round consist of 6 tricks (or 5 tricks in a 5-player game). Each trick consists of several steps wherein players will take turns. To determine how many tricks are left in a round, simply count the number of cards left in your hand. A summary of how a trick is played follows.

The starting player plays a Fruit card from their hand, placing it face-up in the middle of the playing area. If a player has any Pi cards, they can add them now to increase their Fruit card value. 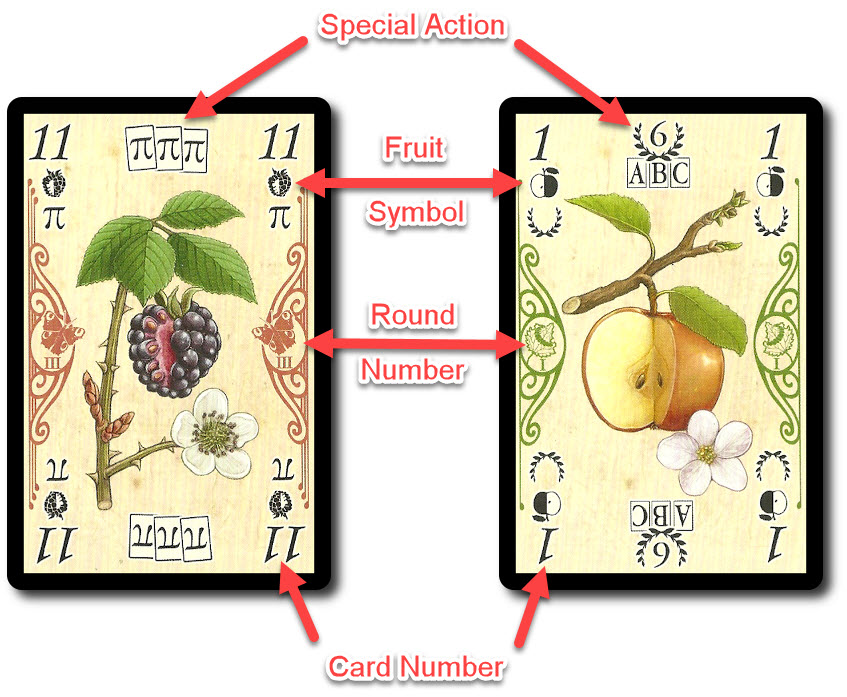 Once the first player has completed this step, the next player plays a card and so on until everyone has a card in front of them.

Remove any Pi cards used during the trick at this time, returning them to the supply.

Starting with the player with the “1′ Turn Order card, they complete the special action of their Fruit card.

Fruit Mixes, once created, are announced. The Fruit card that indicated how the Fruit Mix was to be created is placed face-down (can no longer be stolen) and the cards used to create the Fruit Mix are removed from the game. 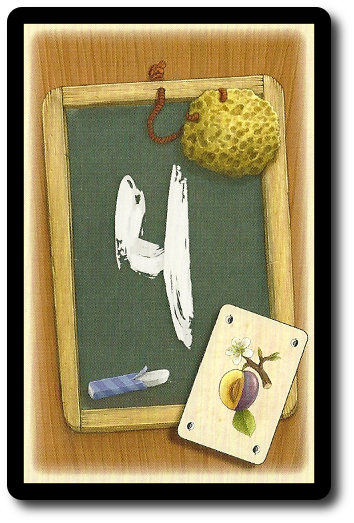 This completes the trick. Return the Turn Order cards to the middle of the playing area.

Subsequent Tricks and Completing the Round

The next trick is played exactly as described above, with the player who went first during the previous trick playing the first Fruit card. The round ends when all players have played the Fruit cards in their hand. The Fruit cards for the next round are shuffled and dealt out the same as before.

The game ends when the final turn is taken during the last trick of round III. All players have one last chance to create as many Fruit Mixes as possible. When done, players count their points earned by adding the number values in the laurel wreaths. The player with the most points wins the game.

To add an additional level of difficulty, players are limited to creating only 1 Fruit Mix per trick and cannot create any additional Fruit Mixes at the end of the final round. Points are scored as normal.

To learn more about Plums, visit the game’s web page.

The Child Geeks enjoyed the game, finding the ability to steal cards and protect their fruit to be a fun twist on an otherwise so-so game. According to one Child Geek, “I’ve played games before where you collect cards to make certain groups and I don’t find them all that interesting. This game makes it fun when you can mess with your opponents.” The only aspect of the game that wasn’t used as much as I thought were the Pi cards. When I asked why that was so, one Child Geek said, “The math is kind of hard.” It can be, I suppose, and quick addition in one’s head slowed down the game. The Child Geeks eventually said that each Pi card was just +1 point, which seemed to work just fine. When the fruits were collected and subsequently eaten, the Child Geeks all voted to approve Plums.

The Parent Geeks also enjoyed the game. One Parent Geek likened it to Poker, wherein players collected certain cards to make the best hand. The only problem with that comparison is that Plums is nothing like Poker, but the Parent Geek was on the right track. The game does require players to collect certain cards, but the type collected does not influence points. Only the fact that you complete your Fruit Mix. This was not lost on one Parent Geek who said, “A great mix of card collecting and trick taking. It’s nice that I can take cards, too, because it also reminds me to play my own cards as quickly as I can!” The Parent Geek makes an excellent point. While any player can lose a card due to theft, the best way to avoid such shenanigans is to collect cards you need and then use them as soon as possible. Sitting on cards just makes you a target. When all the games were over, the Parent Geeks fully approved Plums.

The Game Geeks, ironically, disliked the card thieving, finding it to be an altogether unnecessary and annoying addition to an otherwise straightforward game. As one Gamer Geek put it, “Totally unnecessary. Why bother stealing cards when you put so much effort into your turn order sequence? It’s like a backdoor that no one wants, but people keep using it.” An interesting analogy. Another Gamer Geek said, “I think the game is fine, but it’s mediocre at best. It doesn’t provide a lot that is new and the variable player powers via special actions improves the game as much as it weighs it down.” When the Gamer Geeks used the game variant, they found the game to be faster and more competitive, but not altogether better. Their final vote left the game in limbo, resulting in a mixed approval from the gaming elitists.

Plums is a game that has a lot of similarities with other games, but manages to pull off a game playing experience that feels entirely its own. Part of this has to do with the game’s strange theme, or lack thereof. It’s all about fruit and math, oddly enough. The game’s backstory talks about mathematician Leonard Euler and naturist Maria Sibylla, who were in fact related. Related, but in no other means similar. The same can be said about Plums. There are a number of game playing mechanics thrown in that work well, but do not have a strong bridge to tie them together. It doesn’t feel awkward so much as a bit foreign. Like you are listening to people talk in a different language, catching the gist of the conversation, but not the deeper meaning. In this game, you’ll be working towards Fruit Mixes, but won’t really get the value of individual cards until the whole is completed.

As far as set collecting and trick taking card games go, Plums is solid. It has just enough challenge to make you feel engaged, is fast enough to make you feel like your time is well spent, and easy enough to learn to ensure you always have someone to play with. Do try this beautiful card game and see it its fruity mathematical theme satisfies your gamer’s taste buds.