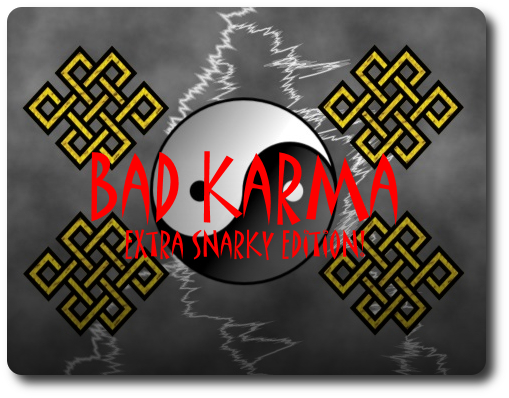 The actions we take either further our own goals or the goals of others. Some believe the more we give, the more we will receive in this world and the next. Karma is like a celestial accountant, keeping track of all that we do and writing little tick marks in various columns. In this game, you are doing all you can to cook the celestial accounting books to balance in your favor.

Bad Karma, designed by Joel Byers and published by SHP Games via the Game Crafter, is comprised of 75 cards, 52 of which are considered “good” and 20 “bad”. The cards are as thick and as durable as your standard playing card. What little artwork there is appears to be taken from a clip art application.

Bad Karma plays with the idea of good and bad karma, the universal currency that tallies an individual’s selfless and selfish deeds. Sort of. “Good” and “bad” cards are used more like card types than existential weights on the soul.

Good cards have a positive value (ranging from 1 to 14) and will score points at the end of the game unless they are part of what is referred to as a “broken set”. Good cards will also cost the player points if they are not used during the game, making “good” cards not only a nice thing to have in your hand, but a positive asset to quickly dump. 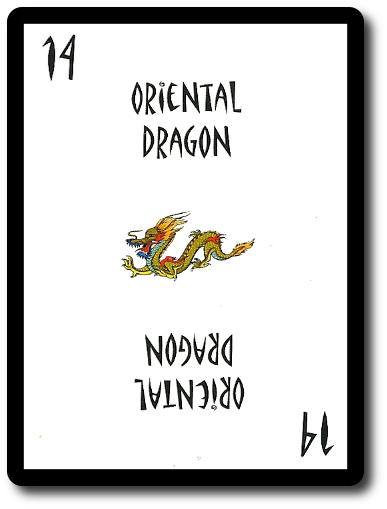 Bad cards have a negative value (ranging from -1 to -13) and will breaks card sets, as well as costing the player point if they remain in their hand. 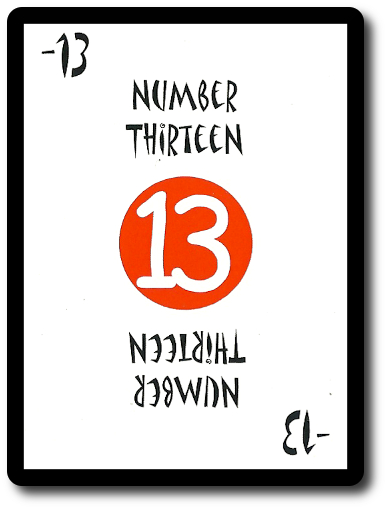 To set up the game, shuffle the cards and deal 8 to each player, face-down. Players should look at their cards, but keep them hidden until played. Place the remaining stack of cards face-down to create the draw deck.

On a player’s turn, they will draw 1 card, adding it to their hand, and then play as many cards as they can or want to. Players can play any of the following:

You can make a set of cards “safe” by including 4 “good” cards of the same value. Safe sets are turned over to ensure they can no longer be messed with.

A set is considered “broken” if it has 1 or more “bad” cards played to it.

As their last action on their turn, the player steals a random card from the opponent on their immediate left. This ends the player’s turn and the next player in turn order sequence now goes.

End of the Round and Game

The player with the most points wins the round. A new round can now be played or the game can end. By default, the game will end when a player makes 500 points or more or a player has -500 points or less.

The game length can be shortened or increased by changing the necessary value needed to win the game. For example, try 1000 points for a long game a 250 points for a short game.

Bad Karma can also be played with partners (2 players against 2 players). Partners sit across from each other and each team should have alternate play between their team member and an opponent team member. Partners share points, but nothing else.

If no one is around to play games with, Bad Karma can be played as a solitaire game. A few of the rules are different, but the gist of the game is to play all the cards in the deck.

The Child Geeks learned how to play the game pretty quickly with the help of a small cheat sheet we created. While the game is not complicated, it does use some terms and has some card plays that the Child Geeks were not familiar with. The use of the cheat sheets ensured that all players could find the information they needed without giving away what they were attempting to do. According to one Child Geek, “I like the game, OK, but it doesn’t feel that interesting.” Another Child Geek said, “I’d say this is a good game, but not a great game.” When the Child Geeks were done, they all voted to give it a mixed level of approval. None of them found it to be a bad game, but they didn’t think they would play it much.

The Parent Geeks were almost identical to the Child Geeks when it came time to review Bad Karma. None of the Parent Geeks found the game to be bad, but none of them could say they found it that interesting, either. According to one Parent Geek, “I don’t know. It just feels like every other card game I have ever played. It isn’t that interest to look at and the card plays are all pretty dull. It’s an OK game, at best.” Another Parent Geek said, “I thought the use of negative values and hurting opponents was very interesting, as is the penalization of not using positive point cards, but the game never really took off for me.” When all the games were over, the Parent Geeks collectively agreed that Bad Karma was not really bad or good. Just “meh”.

The Gamer Geeks were not as kind. They bashed the game for its poor and what they referred to as “lazy presentation”. They also found the game play itself to be uninspiring and way too grounded in traditional games to be even slightly considered original. As one Gamer Geek put it, “This isn’t a game I’d ever want to play again or would recommend.” It’s not that the Gamer Geeks found Bad Karma to be a poor game. More like they found it to be a very uninteresting one that annoyed them. The negativity they threw at it was, in this reviewer’s option, uncalled for and out of proportion to what the game was attempting. But such is the passion of the gaming elitists. Bad Karma was rejected by the Gamer Geeks.

The Parent Geeks said it best. Bad Karma is not a bad or a good game. It’s just a “meh” game at best. It neither thrills or bores, invigorates or causes one to go into a comma. You play it and quickly forget it. The game leaves no lasting impression, good or bad, making it quickly forgettable. A shame, as the game has some good ideas, but none of them make a sizable impact. I’d recommend this game to those who have a cabin or vacation home and want a solid card game they could play whenever they visited.