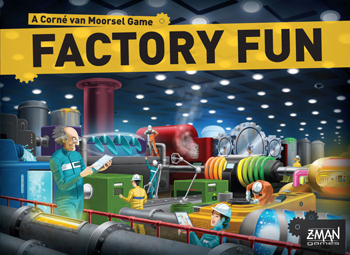 Factory Fun is a game in which the players pick a different machine in each of the ten rounds attempting to connect them with machines from previous rounds to come up with the most money (victory points) at the end of the game.

Each player is assigned the following:

The general supply contains the following:

Players have limitations with regard to money and supplies. Unless obtained by a tile, the only tiles that can be taken from the general supply are the connection tiles. This immediately tells the players that machines must connect to one another eventually as each player only has three normal output containers, yet, they need to place ten machines!

Machines have one to three inputs of various colors, as well as an output, which will also have one of the four colors or black (in the case of a black output, the black output container is acquired from the general supply). Each machine has a number listed on it, corresponding to the amount of money obtained when placed. However, there is a cost to connect the machine as well! Sources, output containers, pipes as well as movement of factory components all have a cost, which is where skill (and some luck of the draw!) come to play.

If you cannot place the tile, you lose $5 and the machine tile is taken out of the game. Connecting one machine having an output of one color to the input of a machine needing that color scores bonus points at the end of the game (there are some rules as to how this can be done). At the end of ten rounds, the bonus points are added to the track and the player with the most money wins the game. 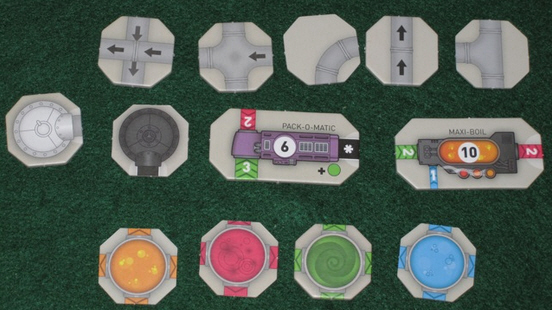 An example of the tiles used in the game 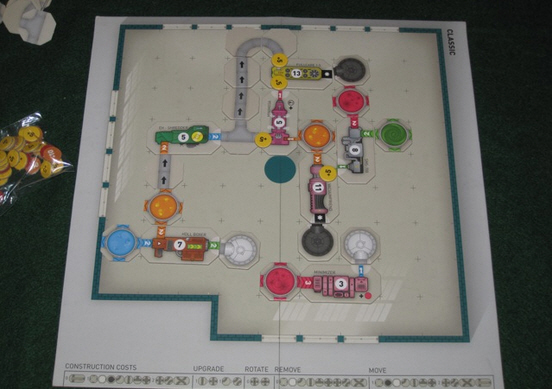 An example of the game being played

My six-year old son, Kyan, loves to build things with LEGOs and enjoys math; therefore, this game seemed like a good game to expose him to regardless of the fact that the box says its for ages 10+. That said, some simple house rules were used to make the game more accessible to Kyan, while still keeping it fun for me.

Emotional coping comes into play at multiple levels. For example, the round begins with each player taking a machine tile from their pile with what they decided to be their “turning” hand and placing it in the center of the table. The tiles are then turned over. In a mad rush, each player must use their other hand (“grabbing” hand) to select the tile they want.

Theoretically, as the adult, I should be able to zero in on my optimal tile and snatch it up before my son has time to blink. Being that I wanted to make the game fun for Kyan, I discarded this part of the emotional coping lesson as there were other places for it to manifest itself; therefore, I let Kyan look over the tiles and gave him first choice. This allowed him to exercise some logic.

Knowing that the number on each machine corresponded to a payout at the end of the round, Kyan would often choose the machine with the larger number. He later learned that these tiles were often harder to place as they had more inputs. He became a bit more cautious, thereby began to understand multiple “risk vs. reward” scenarios.

During the first round, it is easy to connect a machine for little cost, but each successive round can increase in difficulty if careful planning is not exercised. Again, the main idea was to have fun while exposing my son to some basic thinking skills. In order to limit the amount of possible frustration on Kyan, I lowered the number of rounds to be played until either he wanted more machines, or I felt he was ready for more difficulty. I decided to start with five machines rather than ten. This meant that the three output reservoir limitation was not as severe and there was less chance of him needing to forfeit a turn. Granted, this still happened. With a loss of $5, it did provide some level of distress for him.

Visuospatial Skills come into play in a big way here as the player needs to think about how the machines, pipes, and reservoirs can be moved in a way to prevent the need to forfeit the round. The need to forfeit a round also happened to me, which provided some level of comfort as it was a good opportunity to demonstrate to Kyan that setbacks happen to everybody and do not mean the game is over.

Counting and math is the other areas of exposure. Players need to count how many additional parts are needed to connect the machine he chose so that it has the proper inputs and outputs. From there, he has to subtract that cost from his money supply.

Overall, as a person who enjoys puzzles, this game hits the spot. I think Kyan enjoys it as well as he has been asking to play it a lot recently. With the exception regarding the step where players scramble for a machine tile, I cannot see much player interaction if played with adults. However, playing with my son, there were multiple instances of me working with him to help get his factory in tip-top shape. In these instances, it was like both of us working together on a classic picture puzzle, but with additional learning opportunities. 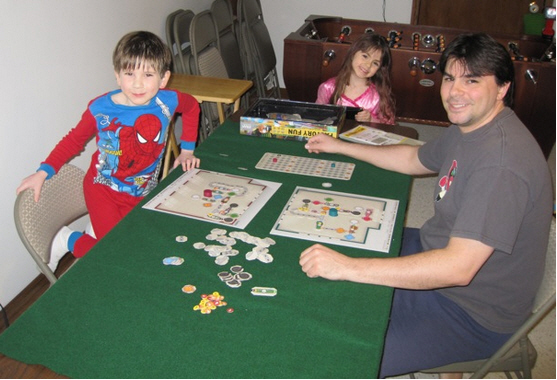