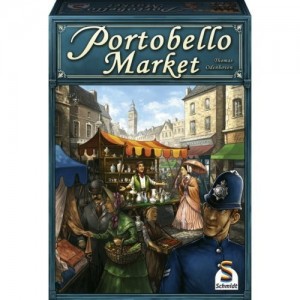 Portobello Market is designed by Thomas Odenhoven and published by Playroom Entertainment. I consider this an abstract game in which players build market stalls and attract clientele. Although a game in progress brings to mind Ticket to Ride (see the photo below), Portobello Market is an area control game rather than a network building game. Most publishers overestimate the minimum age required to play their games; in this case, I agree with the publisher’s recommended minimum age of 8 years.

The board is made up of 12 districts; each district is bounded by 3 lanes (although many of these lanes are common boundaries between 2 districts); each lane has a fixed number of vacant lots for market stalls; each lot has a base value of 1, 2 or 3 points. The lanes meet at 11 intersections, where the customers will be placed. There are 11 customers of 3 types: 5 citizens (also known as plebeians), 5 aristocrats (also known as toffee-noses) and the solitary baron (I don’t have a family-friendly nickname for him). Higher-class customers score more points for players whose stalls they deign to visit.

On his turn, a player spends up to 4 actions building market stalls or placing customers. Market stalls may be built in vacant lots adjacent to the location of the bobby. The bobby may be moved at any time from one district across a lane to an adjacent district, but often players must spend points to do so.

Points are scored when lanes built out and has a customer at both ends. Additionally, each player has two opportunities per game to forgo his turn and instead score bonus points for the number of market stalls he has built in a single district. The game ends after one player has built all his stalls.

As will be clear from the description above, this is a moderately complicated game relative to its target age group. I have not provided a comprehensive explanation of all the rules, as I feel that detracts from the main purpose of a review. There is also a considerable degree of player interaction, in terms of denying scoring opportunities to other players.

It is important to compare one’s options not by calculating the points scored by a single player, but the points scored relative to other players. For example, scoring a district for 10 points may be better than scoring one for 14 points if it prevents an opponent from scoring that same district for 36 points.

Especially in the opening stages, the game presents players with a wealth of options, with the attendant risk of analysis paralysis (also known as vapor lock). This reminds me that the strength of games like Zooloretto is in leaving players with few choices yet still providing a rich playing experience.

We have tried the game with 2, 3 and 4 players, and it works equally well with all of these. There is plenty of depth here to keep adults interested. The game plays quickly and, indeed, ends a little abruptly. Possibly catching players unawares. My five-and-a-half year old son is very enthusiastic about this game and it is interesting to observe him developing a competitive strategy. 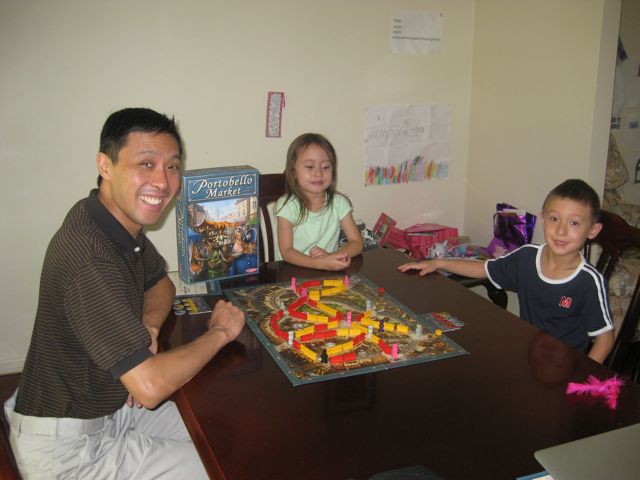