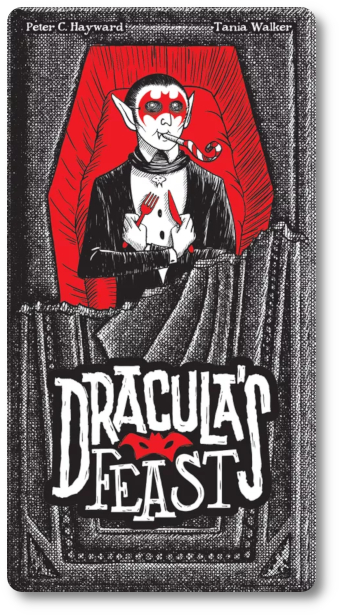 American novelist, newspaper, and magazine editor in the late 19th and early 20th centuries known for his sharp wit, E. W. Howe, said, “To be an ideal guest, stay at home.” Dracula is holding the biggest party of the year, but not everyone attending was invited. Now Dracula is less than pleased and is threatening to throw everyone out, but if you can unmask the unwanted guests before you are shown the door, the party can continue. The problem is, you might be the unwanted guest, and no one wants the party to end.

To set up the game, first randomly choose or purposely select Guest cards resulting in a total number greater than the number of players by one. For example, if playing with five individuals, select six Guest cards. One of these Guest cards must always be “Dracula.” Note that there are a few “advanced” Guest cards included in the game. While these do not make the game more complicated, these Guest cards have special abilities that might not be easy to grasp for players unfamiliar with the game. The rule book does an excellent job suggesting what Guests to start with and breaking down each of the Guest card’s special abilities. Return any Guest cards not selected back into the game box.

Second, find the matching Accusation cards for each selected Guest, placing them face-up in the middle of the playing area. Ensure all the players can easily see these cards from their seated or standing position (honestly, this game is so fast, you don’t need to sit down for it). Return any Accusation cards not used back to the game box. 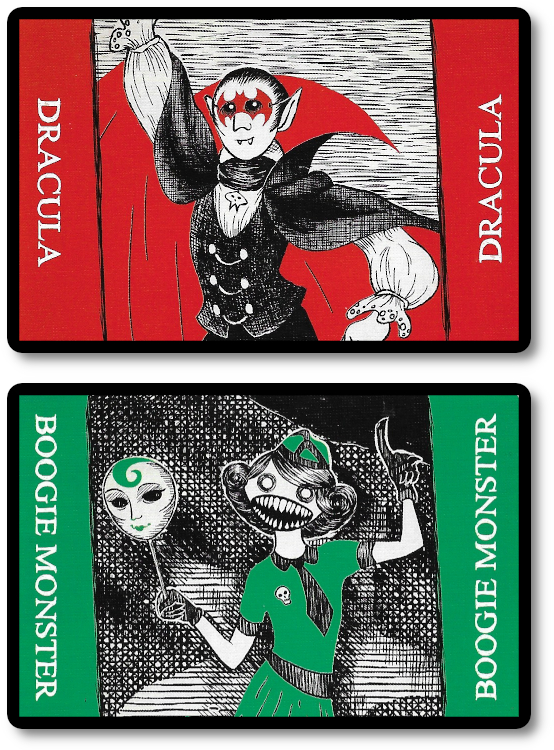 This completes the game setup. Determine who will go first and go party!

Dracula’s Feast comes with 13 Guest cards. Each represents a monster who is attending the party that comes with its own bag of tricks.

Each of the Guest cards summarizes the individual guest’s abilities, too. 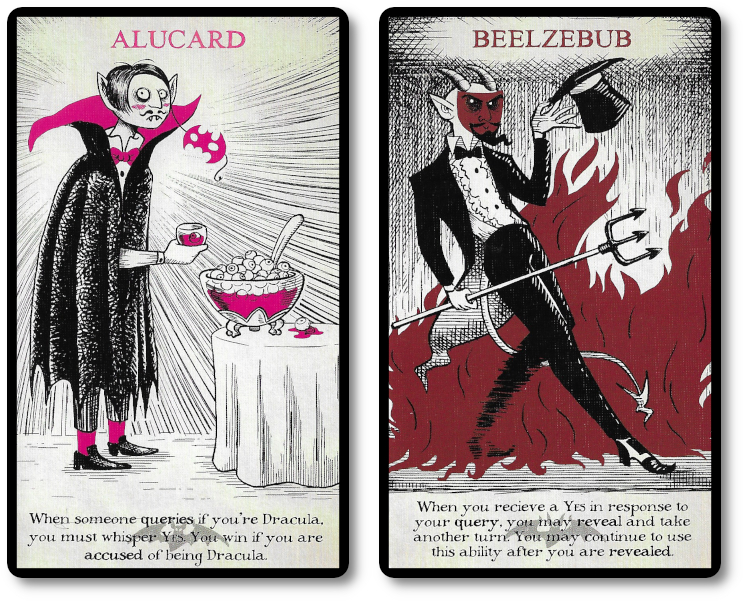 The “Unlife” of the Party

Dracula’s Feast is played in turns with no set number of turns per game. During a player’s turn, they must take one of three possible actions. Each of these actions is summarized here. During the game, table talk is not only encouraged but a necessary component of gameplay. Feel free to lie, say outrageous things, and even suggest some players are doing the same, but all players must be honest with their query responses unless their Guest card suggests otherwise.

This action allows the player to select any other opponent and ask them, out loud, if they are one of the face-up Accusation cards. For example, “Are you the Zombie?”. The targeted opponent must now pass to the player the “Yes” or “No” Whisper card face-down. By default, all players must answer truthfully unless their Guest card’s special ability states otherwise. This is an important point to make, as it’s perfectly possible and acceptable to lie like dogs when bantering back and forth with table talk.

Once the Whisper card is passed, the player looks at it (making sure no other players can see it) and then returns it face-down.

This action allows the player to select any other opponent and ask them to dance. If the opponent accepts, the two players exchange Guest cards, making sure no other players can see them. Any player can refuse to dance without penalty.

This action should be taken with caution and is the default way for the player to win. However, some Guest cards come with additional and alternative means to win, as well.

If the player wishes to accuse their opponents, singling them out and informing all who that opponent’s Guest card is, they announce it to the table with as much bravado as one can muster. Remember, all the possible Guests at this party are noted with the face-up Accusation cards at the table. Feel free to give other players a moment to respond with gasps or incredulous commentary.

The player selects the Accusation cards they believe the accused opponent holds and places one in front of each of their opponents. The player then reveals their Guest card, flipping it face-up.

Each opponent now selects a Whisper card and hands it to the active player face-down. They pass a “Yes” if the Accusation card in front of them matches their Guest card or a “No” if it does not. Next, the player takes the passed Whisper cards, shuffles them, and then reveals them face-up to the table. 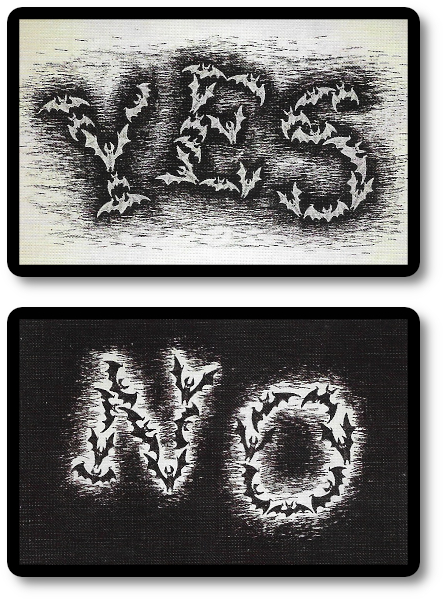 A few notes regarding the Guest cards and general gameplay:

This completes the player’s turn. The next player in turn order sequence now takes their turn selecting one of the three aforementioned actions. This continues until the game is won.

Dracula’s Feast plays fairly quickly. If a longer game is desired, play with two “Mystery Guests.” Only one is shown if playing with the “Magic Mirror” Guest card.

To learn more about Dracula’s Feast, visit the game’s webpage.

The Child Geeks really enjoyed the game and its theme. For those Child Geeks who had played games like Are You A Werewolf? and other hidden role games, the objective, and gameplay came naturally. For those Child Geeks who were not, it took them a round or two to get into the swing of things, but they quickly found their footing and were as competitive as their more experienced peers. According to one Child Geek, “I like the game because it is a mystery. You have to solve it by asking questions and listening to others. The hardest part of the game was trying not to laugh when I knew who a player was!” Another Child Geek said, “The game was hard to understand at first because I didn’t understand how I was going to find out who the players were pretending to be. But after I saw it being played and how the questions were being asked, I knew exactly how I was going to win. And I did!” When the last party plate was cleaned, and the guests escorted out, the Child Geeks gave Dracula’s Feast their full approval.

The Parent Geeks also enjoyed the game, finding it intuitive to play and highly engaging from start to finish. According to one Parent Geek, “Each of the guests is unique and has a little advantage over the others, but never to a point where I ever felt any player was clearly better positioned than another. I also didn’t feel like the game was too hard or too easy. It had the perfect Goldilocks feel to it. Just right.” Another Parent Geek said, “Perfect for parties, especially around Halloween. But I would play this again anytime. Christmas would be weird, but the game would still be a lot of fun.” When the final party favor popped and the ballons feel, the Parent Geeks all cheered for Dracula’s Feast.

The Gamer Geeks found Dracula’s Feast to be quick, easy to grasp, engaging, and unnecessarily heavy at times. According to one Gamer Geek, “I think the game is fine. It isn’t breaking any new ground here, and the gameplay is solid. There are so many characters, though, so I wonder if the game gets a bit heavy sometimes due to how many possibilities there are. The Accusation cards help, but if you play with a large group, yikes, it takes a bit to get your head straight on who might be who. This left me feeling like the game certainly has a sweet spot regarding the number of players. Still, I enjoyed it and would play it again if in the right mood.” Another Gamer Geek said, “A fun game that is all about misleading but never being false. That is where it becomes a real challenge. You want to trick and trap, but you have to do so with a straight face and never once tell a lie through the cards. Tricky. Tricky and fun. I enjoyed it.” When the cake was cut, the Gamer Geeks agreed that Dracula’s Feast was a good time for all.

Dracula’s Feast found love with all our groups with very few players not enjoying it, and not a single one of our geeks found the game to be “bad” or “boring.” Just the opposite, in fact. What made the game a real treat for the individual player was how the game is played. You have to listen intensely to not only what is being said but what isn’t. It would be best if you watched the players as closely as you watch the table. And most importantly, be really sure you have your fake story straight, or others will find gaps in your armor and quickly go in for the kill. This is a lot of fun for gamers like me who play games mostly because of the engaging social interaction you get verbally and mentally. Some players, however, find this type of gameplay annoying or simply not their cup of tea. Regardless, everyone who had a chance to play enjoyed ourselves and the company we partied with.

The “advanced” Guests truly are just that. I don’t recommend they be played with at first. They bring to the game subtle means and ways to get around questions and dive deeper into gameplay that is not intuitive if you are unfamiliar with the game. That said, I highly recommend they are added to the rotation once the players finish their first game. While they are advanced as far as how they allow players to interact with others, the game is intuitive enough to quickly teach players all they need to know in a single game, allowing for additional rules to be easily absorbed by the mind.

Do play this delightfully creepy hidden role game. It has just enough “bite” to keep you hooked and will satisfy the detective in you, and that’s no lie.