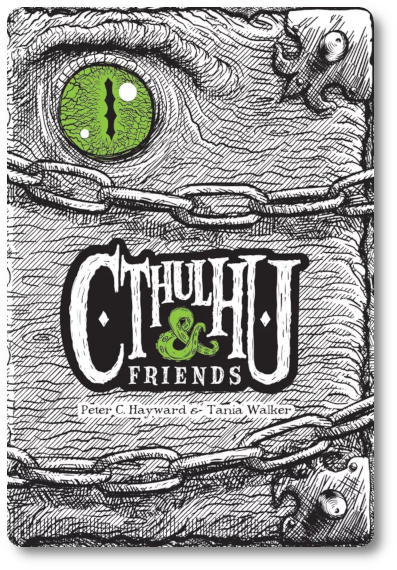 Some parties are doomed to fail right from the start. Case in point, Dracula’s latest bash at the castle. First, he had uninvited guests crashing his delightful get-together. Then, just when he thought he had that under control, an ominous knock at the door echoed throughout the castle halls. It looks like Dracula has more unexpected visitors, but this time, these unexpected additions to the party are here to stay.

Dracula’s Feast: Cthulhu and Friends, designed by Peter C. Hayward and published by Jellybean Games, is comprised of one “Investigator” Guest card, one “Investigator” Accusation card, six VIP Character cards, 20 Whisper cards, 10 Reference cards, and 12 Artifact cards. Artwork, again provided by the talented Tania Walker, furthers the fun and narrative of the game by providing images of the new guests that are anything but “normal.”

Introducing the New Faces at the Party

This game expansion introduces six VIP Character cards that are all considered “Visibly Imposing Partygoers” (VIPs). These new additions to the party are not at all like your common everyday party guest. Instead, they come with new rules and new ways to play, which are summarized here.

The VIPs include the following:

The “Investigator” Guest card is considered a guest and plays the game like as any other guest. In addition, the Investigator can play with the Artifact cards, using the forbidden knowledge and power to have some fun at the party. 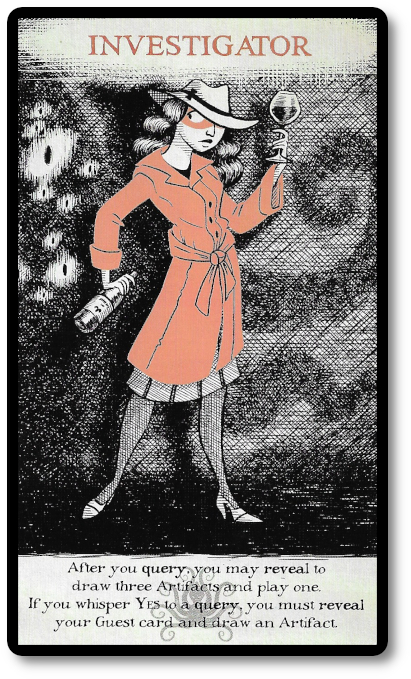 Artifacts for the Afterparty

Artifact cards are used when playing with the “Cthulhu” VIP Character card or “Investigator” Guest card. There is also a game variant that allows the Artifact cards to be used by everyone, which we summarized in the “Game Variant” section of this review.

Artifact cards act as a special action, giving the player who has an Artifact card another option for an action to take during their turn. Once the Artifact card is played, it’s immediately resolved and then discarded. 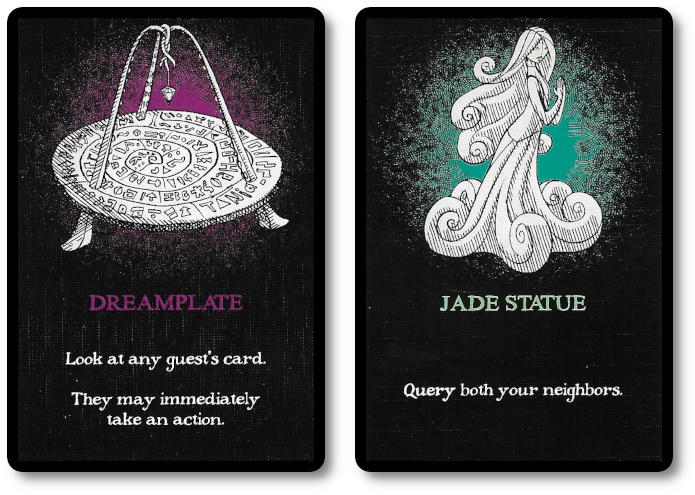 Normally, the Artifact cards are only in play when Cthulhu rises from the deep or an Investigator arrives at the party. This game variant allows the Artifacts to be used by everyone, regardless of any eldrich creatures or nosey private eyes in attendance. Each player starts the game with an Artifact card which can then be used once during the game. Think of it as providing an additional one-time-use power as an action.

To learn more about Dracula’s Feast: Cthulhu and Friends, visit the publisher’s website.

The Child Geeks enjoyed the new cards, finding it interesting how the game was still very familiar and easy to play, with the new cards only adding new ways to enjoy the overall experience. Not adding to the game’s complexity or time it took to play it. According to one Child Geek, “I liked the expansion. Especially the Artifact cards that added new ways to play the game.” Another Child Geek said, “The children and the death guy are my favorites. I also like Cthulhu because I know that is who I am supposed to like.” Yes, it’s true. If you are a geek, you are obligated to love Cthulhu, ninjas, aliens, and pirates. When the last party guest was thrown out, the Child Geeks voted and approved Cthulhu and Friends.

The Parent Geeks liked some of the ideas in the expansion but was not overly taken by it. According to one Parent Geek, “The expansion feels unnecessary, as the original game was very much complete in and of itself. I think the ideas introduced in the expansion are clever, however, and I will enjoy playing with them in the future.” Another Parent Geek said, “It’s fine, but not altogether interesting or necessary. I feel it adds additional weight to the game, trying to fill a space that doesn’t exist. The Artifacts are fun, though, and I would play with them every chance I get, but wouldn’t much care if we never played with the VIPs again.” When Cthulhu finally went to bed, and the lights were out, the Parent Geeks took a vote and gave the game expansion a mixed endorsement. They found it interesting but not necessary or providing much in the way of adding value.

If the Parent Geeks were on the fence about the expansion, the Gamer Geeks were firmly on the ground with a strong opinion: the expansion was absolutely unnecessary. According to one Gamer Geek, “Here is a perfect example of a game expanding its gameplay where it doesn’t need it, doesn’t benefit from it, and is all kinds of unnecessary. I found it a bit insulting, actually, that this was considered an expansion, as all it did – with the exception of the Artifacts – is throw in some new characters for players to use. Yes, the game can now be played with more, but I don’t think more players would make this game any better.” Another Gamer Geek said, “Nice idea but not needed. A bit of a waste when it comes to an expansion.” When all the party leftovers were put into the fridge and the trash is taken out, the Gamer Geeks agreed that Cthulhu and Friends wouldn’t be a welcome guest at their next party.

In the end, I don’t believe there is much of a need for an expansion to the Dracula’s Feast base game. It was complete and played great. The Artifacts are a nice edition, but unnecessary and do nothing to make the game more enjoyable. “More things to do does not make for more game to enjoy,” to quote a game designer friend of mine. And in the case of this expansion, I believe that to be true.

While I do not believe there is anything particularly wrong or poorly done with this game expansion, I cannot bring myself to recommend it either. It felt unnecessary from the start and never left any of us with a satisfying finish. The Child Geeks enjoyed it, but not because it was an expansion. They enjoyed it because it let them play Dracula’s Feast again, which they all dearly love. In contrast, the Parent Geeks and Gamer Geeks turned their nose up to the unwanted guests at Dracula’s party and never once changed their mind after playing the game with the expansion several times.

So, where does that leave us? Simply put, I don’t think this game has a place on my shelf or even with the base game. It brought nothing of true value or fill in any holes. It just felt like “stuff” that wasn’t looked for or needed. Give it a go and see if this new addition to the party makes it all the more interesting or is dead on arrival.