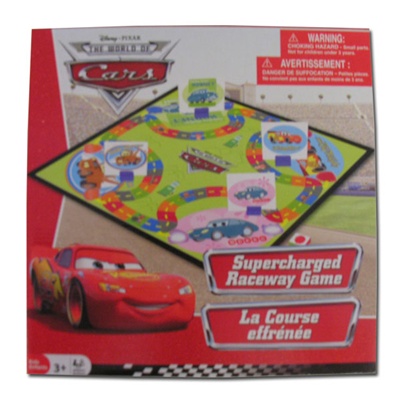 Each player controls a car (Lightning McQueen, Mater, Doc Hudson, or Sally) and tries to be the first player to race around the circuit to return to the starting area. Movement is done by rolling a 6-sided die and moving to any one of 5 colors pictured on the die. The 6th side is a stop sign, which means the player’s turn is lost.

The board has some special squares:

It’s a standard roll and move game that you continue until the misery ends.

For goodness sake!! Is there anything at all that kids do not like? If I coated the board in feces, I think they would still want to play it. I am going to have to find some new criteria for child geek approved because really, if everything is approved, then why have the rating? Up until now, I have been calling it approved if they ask to play it more than once after the initial play-through, and unfortunately this game satisfies the criteria despite my strong dislike for it.

If you cannot already tell what I think of the game….. I absolutely LOVED it!!!

Yeah, right. Loved it like a gunshot to the groin. Can I say anything good about it? Well, yeah. It ends in under 10 minutes.

Now to the bad. At least it’s therapeutic to write this stuff.

The game is the worst example of cashing in on a property name that I have ever seen. It does not teach anything meaningful and is a complete and total waste of family game time.