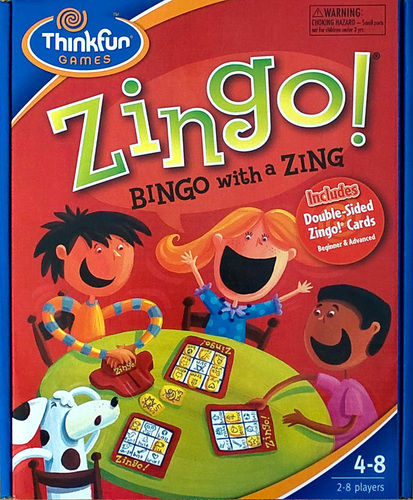 As the name suggests, Zingo! is an derivation of Bingo. Each player is given a card with a 3×3 grid of picture symbols with the word describing the symbol. Tiles are produced two at a time and players claim them in an effort to fill up their card. At which point, “zingo!” is proclaimed loudly.

What sets this game apart from regular Bingo is the tile dispensing mechanism. It contains 2 tile stacks and you move it forward and then back to dispense 2 tiles at the same time. 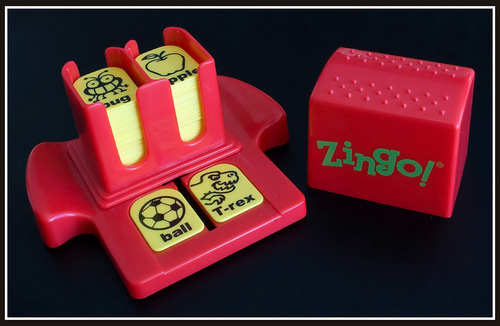 Unlike Bingo where you are examining one number at a time, in Zingo you must quickly evaluate 2 tiles and the first person to verbally claim a tile gets it. Unclaimed tiles are returned to the mechanism to cycle around. Also, unlike Bingo, the tile only goes to one player, so it solicits some competition. To cater to this, the cards have both a green side and a red side. The green side has fewer shared symbols in general and therefore less competition for tiles. This allows you to adjust the level of competition in a game.

My kids love this game. They enjoy being the “zinger”, or “He Who Controls the Tile Dispensing Mechanism”. My oldest son does not really care about who wins. His sole objective is to fill every player’s card; mostly because he wants to keep zinging out tiles.

The game does teach pattern matching and incorporates pre-reading skills by labeling each symbol. Also, there is an element of memory involved because if you have to cross-reference your card each time tiles are spit out, you will be too slow if there is a competing player for the same tile.

Although my kids love this game, I find it mind-numbingly boring. Please pick another game!! Any game that uses a “who said it first” mechanism is just primed for fights.

There are also silly things, like putting 3 owl tiles in the hopper even though the owl appears only once on all the cards combined. So yeah — the game teaches a few things, but I think I would have more fun dunking my head in a dirty toilet.