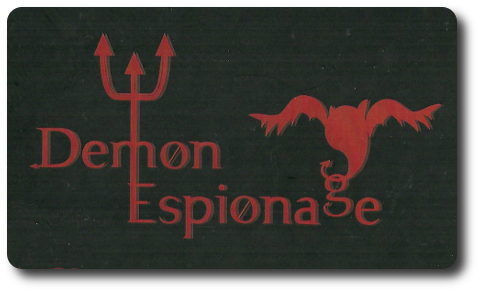 Satan has fallen and now a power struggle rages across the domains of Hell. Absolute power can be obtained by collecting souls. Two opposing forces, one who wants to reinvent Hell and the other who wants to keep it as it is, now battle for control. Whose side you are on is obvious, but not your opponent. Are they friend or foe? Do they side with you or seek your downfall?

Demon Espionage, designed by Dasmond. L, Jodie Huang, Maycent.Y, J J. Tan, Vincent Zhang  and to be published by 5tails Studio, will reportedly be comprised of 6 Health cards, 6 Faction cards (3 Shadow/3 Rebel), 30 Soul cards (in the values 1, 2, and 3), and 79 Combat cards. As this is a review of a prepublished game, I cannot comment on the game component quality. The illustrations by Jodie Huang depict a surprisingly cute version of Hell and its minions.

We March to War!

To set up the game, first give each player 1 Health card each. Health cards are placed in front of the owning player and visible to player’s opponents. Place any unused Health cards back in the game box.

Second, take a number of Faction (Shadow and Rebel) cards determined by the number of players in the game and shuffle. Deal 1 card to each player, face-down. Players should look at their card and then place it face-down next to their Health card. In addition to identifying which faction the player is on, the Faction card is used to mark the player’s current Health card value. Return any unused Faction cards back to the game box. 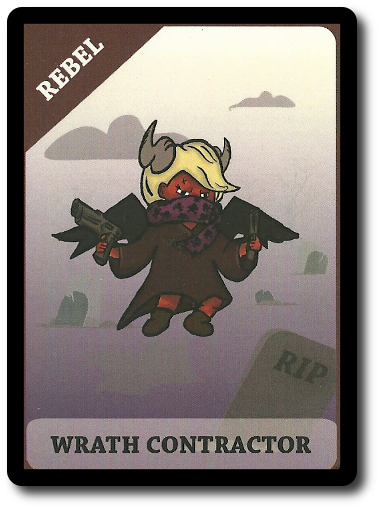 Fourth, take a number of Soul cards based on the number of players and shuffle, placing the deck face-down next to the Combat cards.

That’s it for game setup. Time to collect some souls.

Demon Espionage is played in turns. A player’s turn is summarized here. At any time during the player’s turn, they may play an Enhanced Action card.

The first decision a player must make is determining how active they are this turn. If the player will engage with an opponent, their turn lasts longer (go to step 2). If,  however, the player decides to withdraw, they must discard all the cards in their hand. However, before they do so, they must be able to demonstrate that none of the cards they are discarding are capable of inflicting damage. If they do have cards that can inflict damage, they must engage. 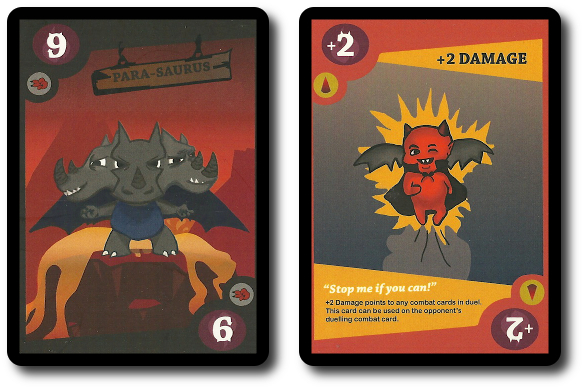 This player will do 11 total points of damage

It’s worth noting that a player will be attacking foes who might be on their side. Until the Faction card is revealed, players run the risk of attacking a fellow Faction member and being attacked by one!

Both players now reveal their cards. By default, the player who does the most damage wins the duel. If Limited Action cards were played, they are used to determine the outcome of the duel. For example, the “R.P.S.” Limited Action card changes the duel to a quick game of Rock-Paper-Scissors. 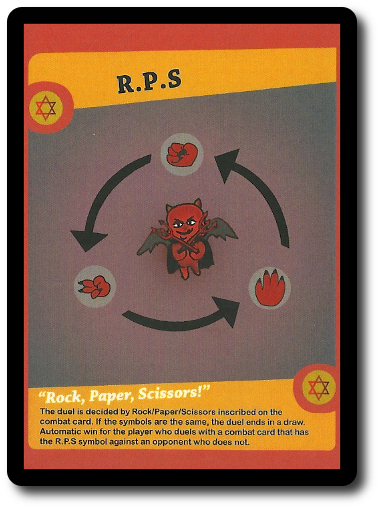 The winner of the duel gets to draw 1 Soul card, keeping its value face-down. The loser reduces their health according to the damage taken. If the winner eliminates an opponent (drops their health to zero), they may draw a bonus Soul card.

The player’s turn is now over. All played Combat cards are discarded, and players draw back up to the number of cards they spent during the duel.

To learn more about Demon Espionage, visit the Kickstarter campaign.

The Child Geeks jumped right in and immediately understood how the game was played. According to one Child Geek, “The game is easy to learn. It’s like War, but with special abilities and effects.” Even the non-gamer Child Geeks got into the game, dueling their friends one card at a time. One Child Geek said, “The game is all about bluffing your opponent. When you are the attacker, you want the player to play low or high cards depending on what you have. I like that the most about the game.” Another aspect of the game the players liked was how fast the game was. The publishers suggest that a single game can take up to 30 minutes, but the Child Geeks seldom had a game longer than 15. Thanks to the game’s speed, the many options to attack, different ways to bluff, and the general fun it provided, the Child Geeks voted to approve Demon Espionage.

Some of the conservative Parent Geeks were not to pleased about the game’s theme, but after looking at the cards found nothing to be concerned over. According to one Parent Geek, “I was concerned that this wouldn’t be family appropriate, but the card’s artwork is just plain silly and the gameplay is light.” The Parent Geeks were not as taken by the game as the Child Geeks. They too felt it was “just like” War, with some extra cards thrown in. While that was not a deal breaker, it didn’t thrill them, either. As one Parent Geek put it, “The game is OK, but not great. It doesn’t keep my interest for long, but since the games are short, that really doesn’t matter.” Another Parent Geek said, “An OK game. Pretty simple. I can see myself playing this with my family, but I don’t know if I would actively seek to play it with my friends. When the votes were in, the Parent Geeks gave Demon Espionage a mixed level of approval.

The Gamer Geeks were not impressed. According to one Gamer Geek, “I’m no game designer, but this feels like a pretty poorly designed game. It uses the mechanics of War and just throws in some extra cards to create effects that augment the cards and hidden factions. Nothing original here and for that reason, I cannot endorse it.” Another Gamer Geek said, “Easy gameplay aside, the entire experience feels shallow. I never bought into the game’s theme and I most certainly never really cared if I won or lost.” While the Gamer Geeks were very harsh towards the game from their elitists perspective, they did acknowledge that Demon Espionage would make an OK game for kids, non-gamers, and even casual gamers. As one Gamer Geek put it, “There’s not nearly enough here for me, but there should be enough for other players who don’t play games often or like lighter games.” When the votes were in, the Gamer Geeks rejected Demon Espionage.

I would not go so far as the Gamer Geeks to suggest that Demon Espionage is a bad game, but it’s most certainly a very light one. The level of thinking a player needs to do is minimal, but the card bluffing aspects elevates the game to a higher level of entertainment. If players approach the game as one of blind dueling, active bluffing, and tactical card plays, they should get much more out the game. If not, then yes. Demon Espionage is going to feel like an exercise is playing card after card after card in the blind.

Demon Espionage is the kind of game that is not complete. It requires a social component that only the players can provide. If the players are actively attempting to beguile each other, the game is a lot of fun. If not, the game falls flat. Is that the game’s fault? Hard to say and I’ve heard arguments both for and against social deduction and bluffing games that fail to provide entertainment. In this case, the game can be played with or without a lively group, but how much enjoyment you get is directly proportional to how much the players interact with each other. If you have a group of friends who enjoy a light card game, do try Demon Espionage.

This is a paid for review of the game’s final prototype. Although our time and focus were financially compensated, our words are our own. We’d need at least 10 million dollars before we started saying what other people wanted. Such is the statuesque and legendary integrity of Father Geek which cannot be bought except by those who own private islands and small countries.