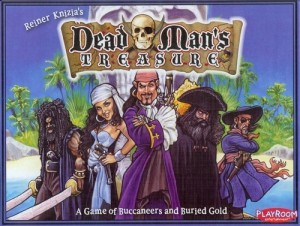 Dead Man’s Treasure is another Reiner Knizia design, published in 2005 by Playroom Entertainment among others. It is an area majority card game, with a pasted-on theme of pirates competing for buried treasure.

There are six island tiles, placed in a circle in the central play area. There are two pirate pawns, Captain Flint and Ben Gunn, who start the game on different island tiles. Treasure tiles with values ranging from 1 to 7 are then placed on the island tiles (up to 4 tiles per island, depending on the number of players). Each player receives 8 pirate cards, seven of which have values 1 to 7 and one of which depicts a cannon.

In clockwise order, players take turns placing one of their cards face-down on an island of their choice. If there is already a face-down card on that island (from a previous turn), then it is turned face-up, revealing its value. If Captain Flint or Ben Gunn is on that island, then the pawn is moved one island counterclockwise or clockwise respectively. If the revealed card is a cannon, though, then it and the newly-placed card are removed from the game and any pirate pawns stay where they are.

The game ends when all cards have been placed, or if Captain Flint or Ben Gunn complete a full circuit of the island tiles. The island with Captain Flint is cleared of all treasure tiles; these are removed from the game. On each other island tile (proceeding clockwise), the player with the highest total value of cards takes the most valuable treasure tile, while players with lesser totals get the next most valuable tiles in descending order (ties are broken by looking at players’ totals on the previous island). The Ben Gunn pawn counts as a treasure tile of value 10.

The player with the most treasure wins!

I acquired this game as part of a bundle in a trade. Although I have enjoyed most Reiner Knizia designs (with Monkey Madness being a notable exception), I was not sure what to expect until I read the rules. After that, it was clear that the game was simple enough that my 6 year old son and possibly even my 4 year old daughter could understand it. Whether they could pursue a sensible strategy was another matter.

So far we have played this twice. My daughter did not really grasp the game; that is one of the hazards of trying out so many new games with young children. My son enjoyed it, though, especially as he won the first game quite handily. He did not fare nearly so well in his second game (his score, I mean, he enjoyed it just as much), and it seems to me that strategic play is less influential than good fortune in determining the winner. That is my excuse and I am sticking to it!

We learned from our games that it is rather difficult to predict where Captain Flint will be at the end of the game. This has a major impact on the outcome, as any cards on that island represent a wasted investment. While the game has no randomness in the form of die rolls or the like, the amount of hidden information forces players to gamble on the placement of their strongest cards. This creates a mild tension in the closing stages of the game, which is soon resolved with the revelation of Captain Flint’s final resting place and the pecking order on each island.

This is a fun light filler and I am sure it will return to the table often.