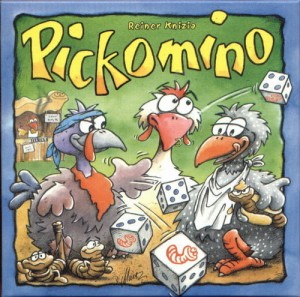 Pickomino, designed by the great Reiner Knizia and published in 2005, is a press-your-luck dice game in which players compete for the most roasted worms! Naturally, this is actually an abstract game with a pasted-on theme.

The game consists of 8 six-sided dice (which look like regular six-sided dice except that the 6-pips are replaced by red worms) and 16 worm tiles (like mahjong tiles, numbered 21-36 and each showing one to four worms – higher-valued tiles have more worms).

The worm tiles are placed in the center of the table (the grill). In clockwise order, players roll the 8 dice and keep re-rolling until they have a total that they are happy with, or until they bomb out!

After the initial roll of 8 dice, a player must set aside all dice of a single value (e.g., all 4s). He may accept the total of the dice set aside, or else re-roll the leftover dice, again setting aside all dice of a single value not already set aside. He may choose to end his turn at any time, so long as the set-aside dice include at least one worm (each worm counts as 5) and the total allows him to take a worm tile.

The dice total permits the player to take a worm tile from the grill of equal or lesser value, and to place this tile face-up in front of him on top of a stack if he has already collected worm tiles in earlier turns. If the dice total corresponds exactly to the value of a worm tile on top of an opponent’s stack, he may steal it for himself!

A player “bombs out” (my term, not the official one, “failed attempt”) if the re-rolled dice show only values already set aside or if his dice total is insufficient to take a worm tile. If he has collected a worm tile previously, he returns the top tile of his stack to the grill, and the highest remaining worm tile on the grill is removed from the game.

The game ends when the last worm tile is taken from the grill. The player with the most worms on worm tiles is the winner (ties broken by highest-valued tile).

I first encountered this game at the Australian Games Expo 2 years ago, and instantly recognized this as a game that both adults and children could enjoy. However, at that time I also knew that my children were too young to enjoy it. Now that my son is 6 years old and very proud of his arithmetic skills, I was sure that he would relish yet another opportunity to put these to use. I was less sure about my 4 year old daughter, but rolling handfuls of dice transcends age, right? So, one fine day, I realized that it was exactly the right time to purchase this game, and later that day, I did exactly that.

This game was a runaway success, well worth the $49 I spent to pick it up (it’s a little hard to come by in Australia nowadays, and our board game prices are generally higher than in the US). As I thought, my son loved calculating the totals. What came as a surprise to me was that my daughter not only loved rolling the dice (even though she could barely hold 8 dice in her hands at once, she insisted on trying over and over again), but also was determined to make her own decisions with little if any help from the rest of us. She was also very keen to show that she is no slouch when it comes to adding numbers; no doubt, she does not care for being upstaged by her older brother!

Bombing out is always amusing: it seems to happen to me the most, even though I think I am playing hard to win … or perhaps because I am playing hard to win. This is a good opportunity to exaggerate my disappointment, and although I would not generally encourage my children to celebrate the misfortune of others, games are an exception to that. The stealing of opponent’s worm tiles is another aspect of this game that promotes poking fun at other players, so long as it is all done in the right spirit of shared enjoyment.

In summary, this is a great filler, an oldie but a goodie, and if your family gaming collection does not already include a push-your-luck dice game, such as the much-fancied-by-my-fellow-Father-Geeks Zombie Dice, then this is a compulsory purchase. (You might say that, unlike Zombie Dice, this one is a no-brainer.) Throw out that copy of Yahtzee and get this instead. 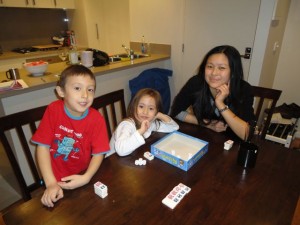