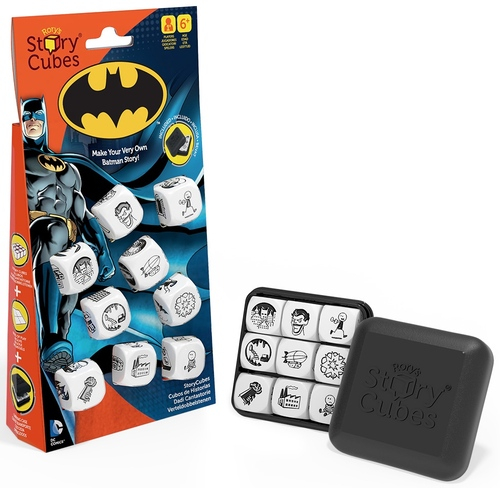 English-American film director, screenwriter, and producer, Christopher Nolan, said “Superheroes fill a gap in the pop culture psyche, similar to the role of Greek mythology. There isn’t really anything else that does the job in modern terms. For me, Batman is the one that can most clearly be taken seriously.” Batman is a loner, a rebel, and dedicated to his ideals. He’s a hero to many and now you can join him on his adventures.

Rory’s Story Cubes: Batman, designed by Rory O’Connor and published by Gamewright, is comprised of 9 custom six-sided Story dice and a plastic case to hold the dice. The images on the dice depict different villains, heroes, events, and objects found in the exciting world of Batman. An icon guide is provided (that does not fit in the dice case) that identifies some of the more obscure icons on the dice. However, the guide is not necessary and part of the fun is interpreting what is rolled, using your imagination to determine what each icon represents. 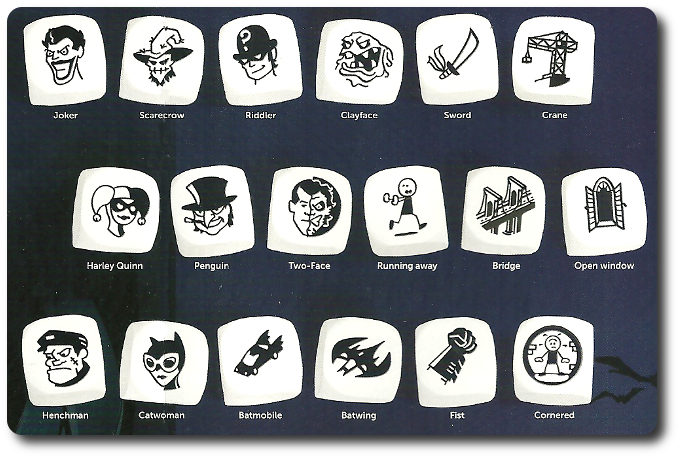 Example of just a few of the many different dice icons

Rory’s Story Cubes: Batman can be played two ways. Each method is summarized here. It’s suggested that 3 Story dice be used to describe the beginning of the story, 3 to describe the middle, and 3 to describe the end. All 9 Story dice should be used, but only if the player wants to. The player is always welcome to use the dice however they like, with the only limitations being their imagination.

Take all 9 Story dice and roll them. Use the rolled icons to create a story. After writing it down, take another piece of paper and draw a 9-panel comic strip! This method of using the Story dice is intended for a single player, but there is nothing stopping a Parent Geek and a Child Geeks from collaborating.

A Team of Superheroes

If playing with a large group of people, give each person 1 Story die. One person roles their Story die and starts the story using the rolled icon. The next player in turn order sequence then rolls their Story die, using the words “Suddenly”, “Meanwhile”, and “Previously” (or whatever they like) to bridge one storyteller’s contribution with another. If there are not enough Story dice for everyone, pass those already rolled so each player has an opportunity to contribute to what should be an epic story. When the turn order sequence returns to the first player who rolled, the story is completed or just beginning. It’s up to the group to decide.

The Child Geeks, being familiar with Rory’s Story Cubes, jumped right in and took control of the story. Each roll resulted in a new story hook and a plot hole to overcome. Everyone enjoyed themselves and a few arguments were also had when certain villains didn’t act the way others thought they should. According to one Child Geek, “The Joker would never flat-out try to kill Batman. The Joker needs him.” Phew! Deep! A few of the Child Geeks even tried to illustrate a few of their stories, which turned out great. When the streets of Gotham were cleared of bad guys, the Child Geeks all voted to approve Rory’s Story Cubes: Batman. 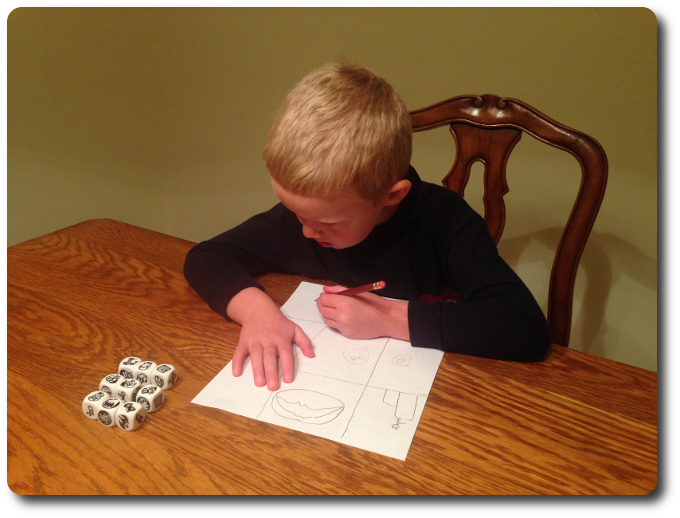 My youngest is creating his own comic. He titled it “Batman Saves the Day, Again”.

The Parent Geeks were also very pleased with the dice, but from their unique parenting perspective. According to one Parent Geek, “I love anything that gets my kids away from the TV and challenges them to be creative.” A father Parent Geek said, “Batman is really hot right now and I think it’s great my kids want to learn so much about him. These dice let me share stories with them and make new ones.” As a creative aid and six-sided Muse, the Parent Geeks all found Rory’s Story Cubes: Batman to be superb. They didn’t think the dice had much value from an adult perspective, but they fully approved it as a great addition to their family’s collection of games.

The Gamer Geeks gave a very respective nod to the game’s theme, but that’s about it. As one Gamer Geek put it, “Nope.” The Gamer Geeks found no reason to recommend Rory’s Story Cubes: Batman for gaming elitists. Color me not surprised.

Rory’s Story Cubes: Batman is good stuff. Each die offers a new twist and turn in the stories. Every Child Geek was able to recognize the icons on the dice and those they didn’t recognize correctly were still seamlessly added to their stories. Here is a game that depends fully on a player’s ability to be creative, logically think things through, and most importantly, share. While entertaining with only 1 player, the real joy of the dice can be found when more people participate. Each story becomes bolder and better as more voices add to the epic tale. Batman has never been better or sillier at times and a few of the stories even had the villains as the heroes! Excellent!