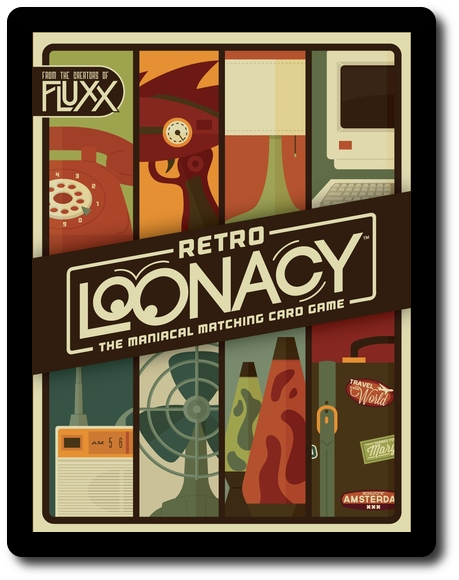 Nostalgia is a funny thing. We yearn for what we remember to be a simpler time, full of meaningful people, places, and things. In actuality, I believe, we are yearning just to be happy. It’s not the past we crave, but the feeling of being content and placed in the exact moment we are meant to be in. In this game, you must think fast to match cards, but don’t slow down to wistfully reminisce about the retro images or you’ll quickly be left in the past.

Retro Loonacy, designed by Andrew Looney and published by Looney Labs, is comprised of 100 cards. The cards are as durable and as thick as your standing playing card. Retro Loonacy is a reimplementation of Loonacy. The only difference of note are the card images which depict retro objects, such as Lava Lamps and the Atari Joystick controller.

To set up the game, shuffle the deck of cards and deal 7 to each player, face-down. Players should look at their cards, but keep them hidden from their opponents until played.

Second, place the remaining deck of cards face-down in the middle of the playing area. This is the draw deck for the duration of the game. Draw the top-most cards to create the discard piles. Depending on the number of players in the game, there could be anywhere from 1 to 4 different discard piles. 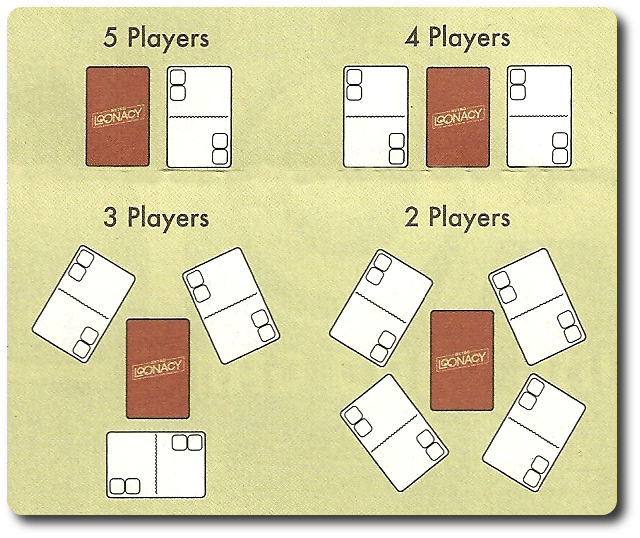 That’s it for game set up. Time to get loony!

Retro Loonacy is a Real-Time game, meaning there are no turns and everyone plays at the same time. One player should say “Ready? Set? Go!” to help get everyone started. During the game, players can complete the following:

Each card in the player’s hand has 2 images. If at least 1 of these images matches any of the top-most cards in the discard piles, the player can play their card to that discard pile. 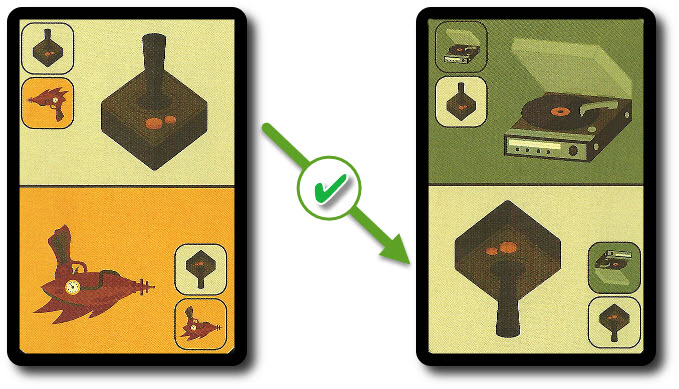 This changes the card on top and introduces a new image to match. Small symbols on the cards help the players quickly identify all the possible matches. As soon as the card is played, a new card can be played on top. The key here is speed, both in playing the cards and scanning the discard piles for matches.

If the player cannot match any cards currently on the discard piles, they must wait and watch for an opportunity.

A new card can be drawn by each player from the draw deck only if all the players agree that none of the cards currently in the players’ hands match the cards in the discard piles. Cards are drawn as quickly as possible and then all players resume play at the same time.

If a player needs to leave while a game is in progress, pause the game temporarily and take the leaving player’s hand of cards. The player’s hand now becomes a new discard pile. As long as there are at least 2 players still remaining, the game can be played.

The game continues with players placing cards as fast as they can to matching discard piles. The fist person to play all their cards wins the game.

The Child Geeks quickly learned how to play the game, but were slow to adopt the mindset required to play the game competitively. On average, it took each Child Geek at least 1 game to fully grasp the amount of speed and dexterity necessary to play and win. This was especially true when playing with a large group of players. According to one Child Geek, “The hardest part of this game is keeping track of all the discard piles! Too many cards!” Cards do get played fast and a player must be quick in order to compete. As one Child Geek put it, “It’s important to have fast hands, but you need a fast mind, too.” Well said! When all the games were over and the Child Geeks had a moment to catch their breath, they voted to approve Retro Loonacy, finding it to be a fast and fun game they all enjoyed. 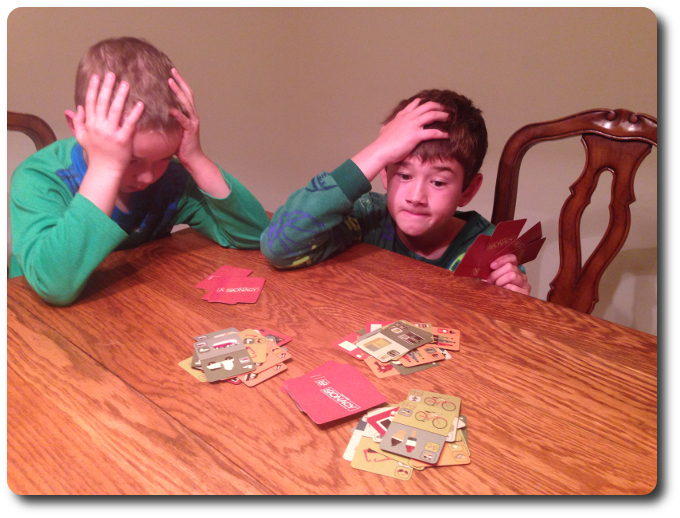 That look my kids get when I say, “Hold on! I need to take a picture!” Total mood killer…

The Parent Geeks also enjoyed the game, but only with their families. According to one Parent Geek, “I’m really digging this game, but it’s only fun when I play it with my family. When I play it with adults, we only play one game and want to move on. I’ll play 2 or 3 games with my kids before we are ready to call it quits.” It wasn’t that the Parent Geeks found the game not to their speed. Far from it. What caused the Parent Geeks to avoid playing the game with their peers was the game’s repetitive nature. As one Parent Geek put it, “If I can get together with a small number of other adults to play games, the first thing I’m going to want to do is play a game that challenges me. This game does challenge me, but it doesn’t fully entertain me.” Regardless, the Parent Geeks thought Retro Loonacy was an enjoyable game and voted to approve it. They might not have enjoyed it much with their peers, but they loved it with their families.

The Gamer Geeks found the game to be too simple and too repetitive for their taste. According to one Gamer Geek, “This is just a simple matching game with a built-in need for speed and accuracy. I think it’s great for younger players, but it lacks everything I like about games.” Another Gamer Geek said, “Great for kids and families, but horrible for gamers.” The Gamer Geeks did enjoy playing the game with the Child Geeks and with the Parent Geeks, which compelled them to admit that the game did have its moments. As one Gamer Geek put it, “Like so many games, the level of fun you have is dependent on the people you play it with. When I play this game with the Gamer Geeks, it’s not fun at all. When I play it with the kids, I can’t help but smile.” After discussing it, the Gamer Geeks voted to reject the game, but only for their group.

Retro Loonacy is fast, fun, and frantic. It can also be oddly anticlimactic at times when all the players no longer have a card to match. The game comes to a screeching halt and any momentum is lost. The game does regain its speed, but only after a fashion. Once the brakes are applied, the game never fully returns to its initial velocity. But the same cannot be said about the game’s conclusion. I have yet to not play a game where at least 2 players were very close to finishing the game at the same time. It’s hilarious to see players lean forward over the cards in an attempt to somehow get an advantage over the other players. What wins this game is speed and nothing else.

I enjoyed the game, finding it to be perfect for quick plays with my children at home and when at restaurants. The game takes very little space and it works very well when sitting at a table or at a booth. The only time the game doesn’t work well is when you have players who don’t want to play. Their cards are needed to advance the game, and if they don’t play them quickly, none of the other players can play their cards, either. Players feed each other cards and gobble them up at the same time, creating a game playing environment that is one part dependency and one part total opportunity. The end result is a lot of fun.

If you enjoy games where speed is key to victory, where fast card plays trump opponents, and victory is never certain, then do give Retro Loonacy a try. I think you’ll find it to be perfect for the family, but avoid playing it with gaming elitists. This game is all about being fast and furious, not fast and serious.