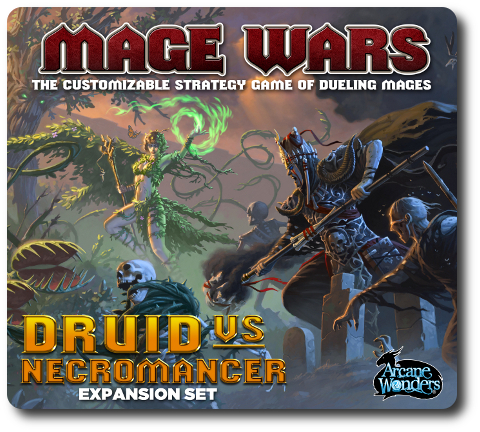 Magic is dangerous in the hands of any who take it to extremes. The Druid and the Necromancer are two such students who have taken their magical devotion to zealot like levels. The Druid knows that only life must continue at any cost. The Necromancer knows only that death is the inevitable end that he attempts to hasten for all existence. Two opposing mages with two opposing powers that are destined to meet and destroy each other.

Mage Wars: Druid vs. Necromancer, designed  by Bryan Pope and published by Arcane Wonders, is comprised of 216 Spell cards, 2 Spellbooks (that contains and organizes the Spell cards), 2 Mage cards (representing the Druid and Necromancer), 2 Mage Ability cards, 2 Zombie/Bleed tokens, 2 Zombie/Corrode tokens, 2 Zombie/Tainted tokens, 3 Growth/Corrode tokens, 2 Growth/Tainted tokens, 1 Growth/Bleed token, 2 Stuck/Corrode tokens, 10 Vine tokens, 1 Initiative token,  1 Eternal Servant token, 1 Treebond token, 1 Corrode/Bleed token, 1 Ichthellid Larva/Bleed token, 1 Icthellid Larva/Corrode token, and 1 Ichthellid Larva/Tainted token . Again, the level of quality presented in the expansion is the same as the core game, Mage Wars, which is required to play. Unless the owner of the game has purchased every Mage Wars expansion released so far, this expansion should easily fit in the core game’s box. This is the core game’s second “Mage expansion”, the first being Mage Wars: Forcemaster vs. Warlord. Although, I personally think Mage Wars: Conquest of Kumanjaro should also be included.

Of particular note are the two new Spellbooks that come with the game expansion. Both are themed to match the new mages. The Necromancer’s Spellbook looks like it’s made out of flesh flayed from what I can only assume to be a humanoid creature. It’s pretty horrific. The Druid’s Spellbook looks like it’s made out of wood with small insects and vines. Neither Spellbook is required for play, but it’s an exceedingly nice touch by Arcane Wonders to put so much thought into the smallest of details.

Note: We will not be covering how to play the game in this article. If you are not familiar with Mage Wars or want to learn more about how the game is set up and played, please read the Mage Wars Game Review.

Of Life and Death

This expansion includes two new mages the players can use to wage epic magical battles in the arena. Like all the mages in Mage Wars, they are students of specific schools of magic and have Mage Ability cards that lists their life, armor, class, abilities, and other information. Each of the new mages are summarized here. 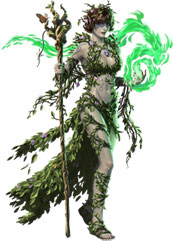 A wood elf student of the school of Nature and Water magic, the Druid is your quintessential Super Gardener. Capable of summoning plants and covering the arena with vines to tangle and strangle opponents, her green thumb is deadly. Her power comes from the mighty trees that surround her like silent sentinels and the life force that walks the earth. Enemy’s of the Druid should be wary of the beauty she can conjure, for even a disarming rose could have lethal thorns. Some special abilities and spells of note include: 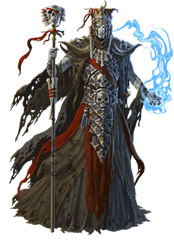 A human by birth, but no longer since he began to dabble in Dark magic, the Necromancer is the stuff of nightmares. Death and decay are the Necromancer’s constant companions as he searches battlegrounds and graveyards for fresh remains to reanimate. His army is the shambling dead who march endlessly to their master’s will. There is great power in what lies beyond sanity and the Necromancer craves it. Some special abilities and spells of note include:

A great number of new and already released Spell cards come with the game expansion. All of them can be immediately used with existing Spellbooks. For new players who don’t have the time to build a unique Spellbook or for players who simply want to test the powers of the new mages, a complete Spellbook is provided for each mage. All a player needs to do is build the Spellbook based on the list of Spell cards provided and get into the game.

This new expansion adds more to what is turning out to be a very big game. With new cards comes new ways to customize and create unique mages for the players to battle. The rules to Mage Wars can be complex at times, but the level of depth, strategy, and tactics necessary to play the game demand it. While this continues to thrill the Gamer Geeks, it also further alienates any who are looking for a casual game. As such, the Parent Geeks and Child Geeks (with very few exceptions) continue to be intimidated by Mage Wars.

Mage Wars is not a casual game. I cannot stress this enough.

What Mage Wars does and continues to do well with this expansion, is provide players with creative solutions to many different problems. Each spell is a tool that is further enhanced by the player’s mage of choice. When players go into the arena, they are not only battling against a foe, but playing a game of wits with their opponent. Whomever builds the most efficient and effective Spellbook will win the day. This may sound like an impossible feat, but each player builds their own specialized character. This gives the player unique insider knowledge about their mage’s strengths and weaknesses. Using this knowledge, the player must penetrate their opponent’s defenses and strike at their weak spot. After each game, players have the opportunity to further improve their mage and close any gaps in their defenses.

While the new game expansion didn’t change anyone’s mind about the game (those who disliked it still disliked it and vice versa), what it did do is further enthrall the masses who are devoted fans to the game. My oldest little geek sat on the floor just going over the Spell cards, organizing them, and thinking about how they can be used in the game. When he went to bed, I did the same. Each Spell has so many possibilities that it’s hard not to excited about it.

For me, this is exactly the kind of expansion I was hoping to see come out first. Necromancers and Druids are the polar opposites of the magical spectrum. Put these two in the arena, and it’s my dream match. Where the Druid brings forth life, the Necromancer counters with death. Where the Necromancer attacks with corruption, the Druid counters with purification. Observing these two mages battle each other with skilled players is an exciting experience. In the hands of novices, both the Druid and the Necromancer will fall flat. The Druid cannot be used to just “grow things”. Her power comes from slowly advancing her vines and cornering her opponents. Likewise, the Necromancer should not simply focus on raising the undead. The Necromancer is the most effective if he wielded like a poisoned knife in the dark.

Even better, players can take the new spells introduced in this game expansion and create some very unique mages. All at a price, mind you. The same rules that apply to the core game apply for this game expansion. Players can create mages that wield both dark and holy powers, but at a tremendous cost. Power continues to be well-balanced, even with two new mages being introduced with abilities to destroy kingdoms.