Please Take Note: This is a review of the game’s final prototype. The art, game bits, and the rules discussed are all subject to change. The game is being reviewed on the components and the rules provided with the understanding that “what you see is not what you might get” when the game is published. If you like what you read and want to learn more, we encourage you to visit the game’s web page or visit the Kickstarter campaign. Now that we have all that disclaimer junk out of the way, on with the review! 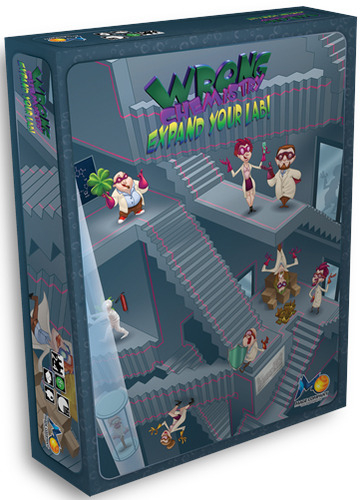 After years of toiling away in an undisclosed government lab, you have finally been able to make a name for yourself. Grant money is starting to roll in and you have procured your own lab and staff! As the owner of your own lab, you get to discover even more elements and colleagues in the scientific community are on hand to assist. But the competition has become fiercer! You must strive to be the best in your field or your new lab will have to shut down!

Wrong Chemistry: Expand Your Lab, designed by Tony Cimino and to be published by Mage Company, is an expansion to the card game, Wrong Chemistry. The expansion is comprised of 66 Element cards, 10 Scientists cards, 1 Element of Surprise card, 1 Transmutium card, and 12 Nobel tokens. The expansion introduces all new elements not included in the base game, helpful scientists that can be used to provide players new actions, and allows for a 5th player to join in on the fun. Note that it’s assumed you are familiar with the base game. If not, please give our review a read or none of the following is going to make any sense to you. As this is a review of a prepublished game expansion, we will not comment on the game component quality. What we were provided uses the same illustrations, icons, and text as the base game and its available expansions.

This expansion introduces a number of new play options that immediately become available to the players. They are summarized here.

The game expansion includes a lot more Element cards for the players to attempt to duplicate. Out of the new Elements cards introduced, the majority are similar in every way (except the Molecule configuration illustrated on the card’s face) to what is already provided in the base game. What is brand new are the 5 new “Black Element” cards that are worth a whopping 5 points at the end of the game! As you can probably guess, the Molecule configuration on the “Black Element” cards are exceedingly difficult to match. 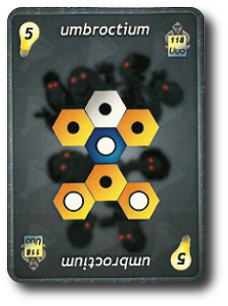 In addition to the already available ways for the players to spend energy to take actions, the following new action is available to a player. At the cost of spending energy, of course. 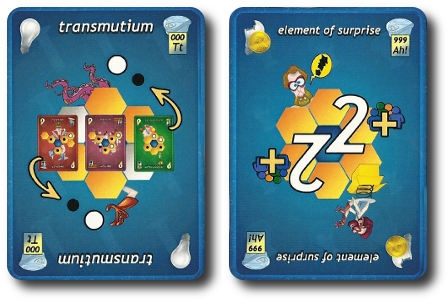 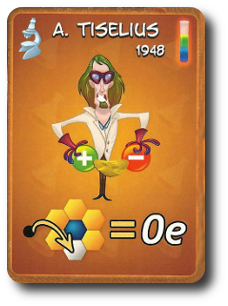 Four is a Crowd, Five is a Party

Finally, this game expansion allows for a 5th player to join at the table to compete for the title of “Top Scientific Dog”!

If playing the base game with the expansion, additional set up steps must be taken. They are summarized here.

For the most part, the game is played in the same fashion as the base game with the following exceptions noted here and above.

Several game variants are included with the game expansion. As always, these are optional and can be included whilst playing or completely ignored.

To learn more about Wrong Chemistry: Expand Your Lab, visit the game’s web page or visit the Kickstarter campaign.

The Parent Geeks remained unchanged in regards to their overall level of approval. The additional game components and rules further divided the two groups, but not in the way you might think. The more “gamer” Parent Geeks actually enjoyed Wrong Chemistry for the first time with the expansion, finding it to be a much more involved and interesting to play. The more casual Parent Geeks and the non-gamers found the expansion to be simply too much, just like the Child Geeks. According to one Parent Geek, “This is an interesting expansion, but it changes the base game way too much. I prefer the original game to this one because its faster, easier to play, and feels lighter.” According to one Parent Geek who really enjoyed the expansion, “This is what Wrong Chemistry should have been when it was first released.”

Wrong Chemistry: Expand Your Lab has an interesting mix of new and existing game mechanisms. Several of our playing members have already touched on how different the base game feels with the expansion included. I agree with several of the Parent Geeks and the Gamer Geeks that the game is much deeper, more complicated, and a lot more engaging with the expansion versus without. But I am not convinced that it made the game better. I think it just made the game different. For some, “different” equates to “better”, but not for me. I liked the base game’s simplicity and casual game play. Wrong Chemistry with the expansion feels bloated and unwieldy at times and I really don’t care for the additional time necessary to win the game, either. The average game playing length jumped to 45 minutes, with some games with younger and less experienced players lasting close to an hour. For the more casual Parent Geeks and the Child Geeks, that was just too much change that wasn’t asked for. For the Gamer Geeks, it was several steps in the right direction.

Perhaps the best aspect of the expansion is that it allows the owner of the game to tailor it to their group. If a casual game playing experience is warranted with a smaller group of people, the base game is all the player needs. If a more complicated game with more options is desired, the expansion can be added. This makes the overall game, with all the expansions included, a versatile offering for any gaming table. Now one game can fit the requirements of all the players. The only downside is that Wrong Chemistry cannot be all things to all players all the time. You’ll have to pick and choose which of the two sides of the coin you’ll want, be it an easier game or a much more involved game. Regardless of which side of the coin is selected, the players win.