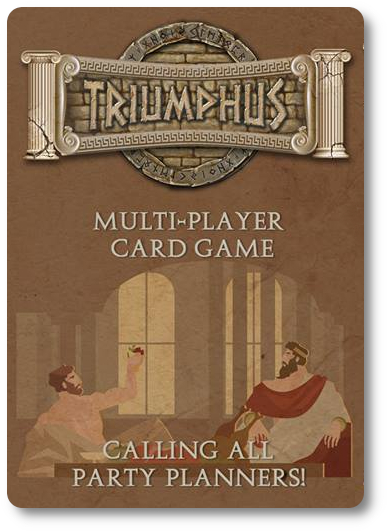 American author and television personality, Ted Allen, said “Planning a dinner party in a way that you’re actually capable of getting it done without panicking is important. It’s bad hospitality for the host to be freaked out.” Good advise, but what if the success of the dinner party determined if you lived or died? Now that is stressful and worth panicking about. In this game, the Emporer’s previous party planner has made their last mistake, losing their job and their head. Now the position is open and you hope to please the Emporer with your elite party planning skills.

Triumphus, designed by James Browne, Laura Varney and to be published by Fairview Games, will reportedly be comprised of 75 Supply cards and 25 Reward cards. As this is a review of a prepublished game, I cannot comment on the game component quality. The provided artwork is excellent, being a mix of modern-day aesthetics leveraging the ancient Greco Roman art style.

Let’s Get This Party Started

To set up the game, first separate the cards into two different piles using the color of the card’s back to quickly complete the task. One will be the Supply cards and the other will be the Reward cards. Shuffle both piles of cards separately.

Third, deal to each player five Supply cards, face-down. These cards are the player’s starting hand. The cards should be kept a secret until played. Place the remaining Supply cards face-down and next to the Rewards draw deck. This is the Supply draw deck.

That’s it for game set up. The player left of the dealer goes first.

Triumphus is played in turns with no set number of turns in the game. On a player’s turn, the can take up to three actions. Each action is optional and can be done in any order, but each action can only be taken once per turn. Each of the actions available to the player is summarized here. A player also has the option of not taking any actions and skipping their turn if they see no advantage in taking it.

Each Supply card represents one essential element of a great feast. These include wine, decorations, offerings, entertainment, and food. 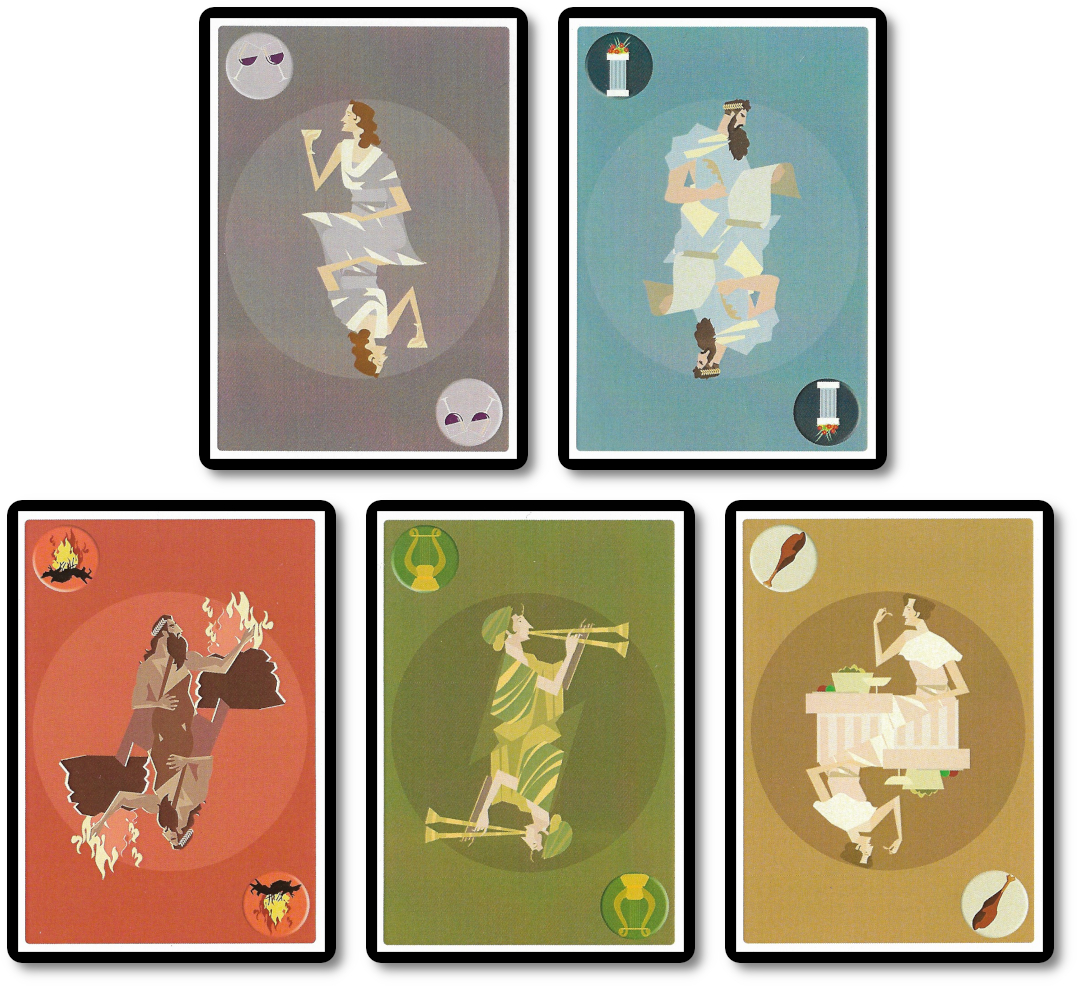 Each of the available and to be collected Reward cards have three to four icons that match one or more of the Supply card icons. If a player wants to collect an available reward, they play Supply cards from their hand and demonstrate to their opponents that the needed supplies match. If they do, the player collects the Reward card and places it in front of them, face-up. The played Supply cards are then discarded face-up to the discard pile. A new Reward card is drawn to replace the previously collected Reward card.

For example, the following Reward card requires one entertainment, one wine, and one decoration. This results in a retelling of the good deeds done during the Emporer’s rule (thematically speaking) and a possible four points at the end of the game. 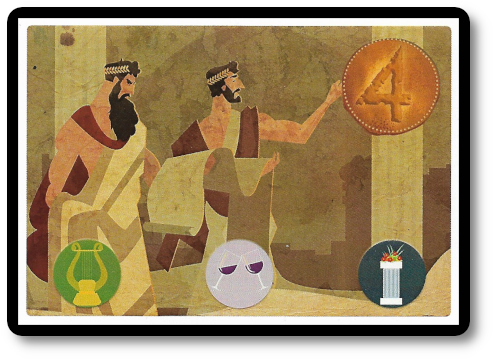 After the player finishes taking their actions (if any), they must discard down to no more than 10 Supply cards in their hand. The player decides what Supply cards to discard. This completes the player’s turn. The next player in the turn order sequence now takes their turn.

To learn more about Triumphus, visit the game’s website or the Kickstarter campaign.

The Child Geeks enjoyed the game, finding it to be intuitive to play and fast. Very fast. The first game took an average of about 20 minutes. All subsequent games took about 15 minutes. The game designers have done an outstanding job of streamlining the gameplay, making each player’s turn at the table a quick exercise in decision making with little to be overly concerned with. According to one Child Geek, “What I like most about the game is that there is always something to do and nothing you do feels like it is bad.” Analysis paralysis (or “vapor lock”, as I like to call it) is almost non-existent in Tripumphus. What a player can and cannot do is obvious and the game doesn’t punish a player for not thinking ahead. Another Child Geek said, “I like the art and I like playing it. It was fast.” It really is. When the last party was planned, the Child Geeks all agreed that Triumphus was a triumph.

The Parent Geeks were also pleased with the game. Especially the casual gamers. According to one Parent Geek, “This is an easy game to get on the table. Small footprint and engaging gameplay. I can see this coming with the family when we go on trips or being plopped on the table at home when the family wants to play a game.” With less than two minutes to set up the game and easy rules, Triumphus is most certainly a card game that is easy to get to the table. The more elite Parent Geeks, however, started to see a few flaws. According to one Parent Geek, “I’d play this as a filler or with my kids, but when I want to play a game with adults, I would like to play something I feel I have a bit more control over.” This Parent Geek is referring to the random elements of the gameplay. Players are always drawing random cards. For those who want more control over their hand, this aspect of the game was found to be a bit underwhelming. Regardless, the Parent Geeks found that Triumphus did the trick and was worth their time, resulting in a full endorsement.

The Gamer Geeks found Triumphus to be fast, easy to get to the table, and about as interesting as a breath mint after eating an onion. Which is to say, it did the trick and was then quickly forgotten. According to one Gamer Geek, “A well-designed game that I would play as a filler once. It is not a bad game by any means, but is most certainly not a game I would be itching to get to the table.” Another Gamer Geek said, “These games were great when I was a kid and just starting in the hobby. As a gamer who looks for games that require deep gameplay, strategy, and tactics, this one doesn’t do it for me.” The randomness of the game was tolerable to all the Gamer Geeks as long as they played the game once. After they played it twice and more, they started to whine. When the last party platter was served and there were no more pizza rolls to eat, the Gamer Geeks gave Triumphus a mixed review, finding it to be a good game that was worth playing only once.

Triumphus is fast and lean, but not mean. It’s very casual with each turn being a simple exercise of answering the question “what do I want to do now?” with the answer being obvious. Sure, you could plan ahead, but the game is random and the most important choices to make happen towards the end. The first half of the game is all about collecting whatever Reward cards are available without much in the way of thought. The second half, however, uff…things change.

As the second half of the game starts, the number of Reward cards available are drastically reduced. Players now go from feast to famine. Each Reward card is worth hunting down and collecting. Better yet, players now have to make tough choices (relativly speaking to the game’s overall complexity) about how to leverage their previously collected Reward cards. They could sell them for more Supply cards, but that is a gamble since all Supply cards drawn are random. Still, players will take the chance because the game never feels heavy. This frees players up to simply have a good time, which they do.

I liked Triumphus. It’s a perfect example of how a game can be simple in its execution and fun at the table. You don’t need to count cards here and you don’t have to do much in the way of anything other than enjoy the company you keep at your gaming table. Due to the game being casual, conversation is easy to have without upsetting the gameplay cadence. For those who do want to take the game a bit more seriously, all points are visible and give the player a solid bit of info on where they stand against the competition. Nothing is hidden except random cards. Which players cannot account for anyway.

What you have here is a solid card game. Fast, fun, and casual. Perfect for a game filler, in my opinion, playing when traveling with the family, or friends come to visit and a game is in order. All our players found something they liked, but not all loved it. Which is fine. Triumphus never stays too long at the table to feel like an unwanted guest. Do give this card game about party planning a try to see if it’s the life of your next gaming party.