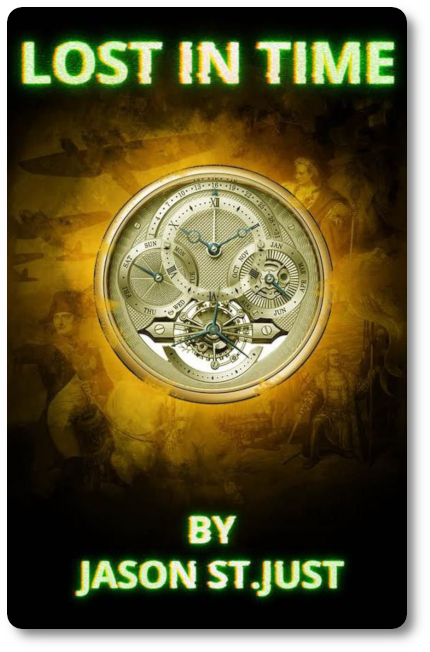 Huzzah! Timetravel is now possible, allowing people to move back and forth within history to visit mankind’s greatest events. Unfortunately, the technology still has some bugs to work out. Your time machine doesn’t appear to want to work correctly, meaning you’ll now have to crawl your way through time if you ever want to get back home. In this game, it’s not the journey that counts, but the time you spend traveling…in time.

Lost in Time, designed and self-published by Jason St.Just, is comprised of 88 cards. The cards are as thick and as durable as your standard playing card but are a bit smaller in size. The artwork and illustrations are mostly clipart depicting significant events in mankind’s timeline.

Making Time to Travel in Time

To set up the game, first find and remove the 12 Item cards. These are not used in the basic game summarized here. Read “Game Variants” for details on how these cards are used.

Second, find and set aside the Chronos card. This card shows a blue or red arrow, depending on the card side viewed.

Third, shuffle the remaining cards and deal five to each player, face-down. These cards are the players’ starting hand. Cards should remain secret until played.

Fourth, place the remaining cards not dealt face-down to create the draw deck.

That’s it for the game set up. The player who dealt the cards will now take the Chronos card and ensure the blue arrow is face-up. The player left of the dealer goes first.

And Away We Go (Through Time)

Lost in Time is played in rounds and turns for a possible minimum of eight rounds, although most games take longer. A player’s turn in a single game round is summarized here.

Note: It’s important to keep the discard pile organized and kept in the order in which the cards are placed to the pile. The last played card should always be on top and visible to all players.

Step One: Take One Optional Action

The first thing a player does on their turn is to decide if they want to take one of four optional actions.

Play a VIP or Disaster Card on an Opponent

A Disaster card played against an opponent forces the target opponent to skip their next turn, be it in the current round or the next round.

Play a VIP or DIsaster Card on Themselves 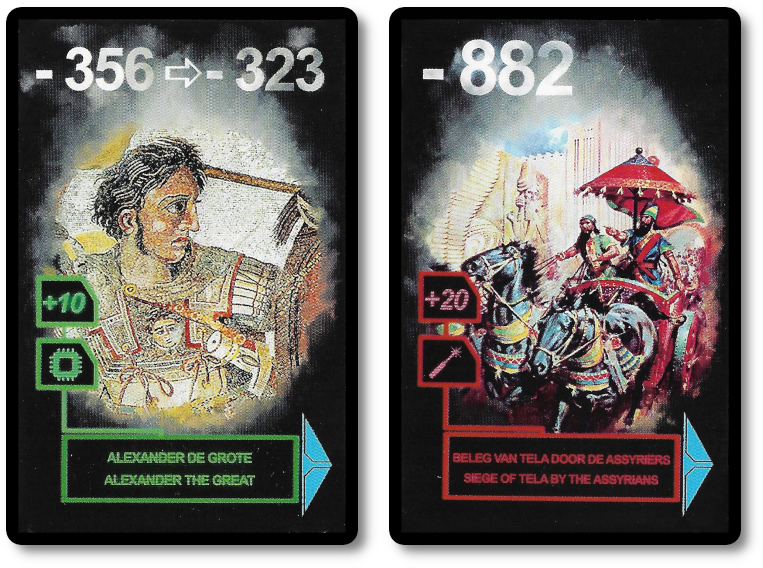 The player may discard a maximum of two cards from their hand. Discarded VIP and Disaster cards have no impact to the game.

If the player likes, they can skip this step and move right to the next step. 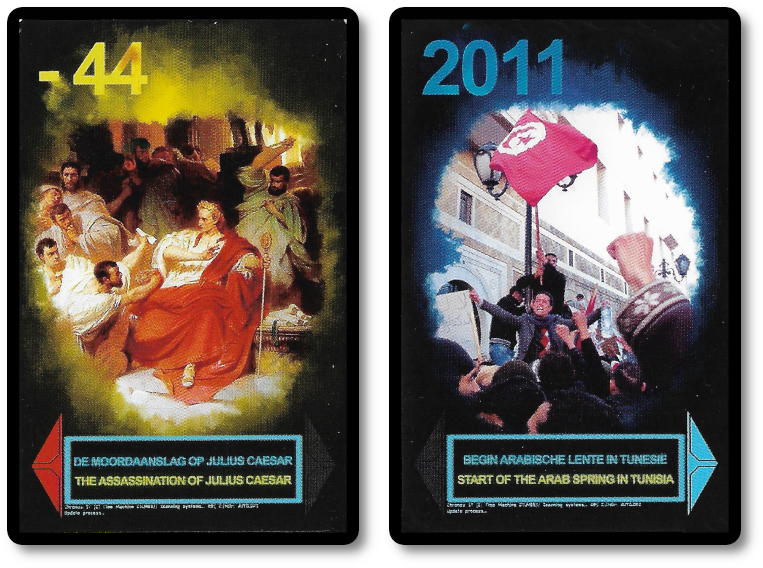 If the player is unable to play an Event card and the card they must tilt is already tilted, that Event card is removed from the player’s Timeline row and discarded.

This ends the player’s turn. The next player in the turn order sequence now takes their turn starting with step one noted above.

Ending the Round and Starting a New Round

The first player to take their turn in the previous round is now the dealer. They take the draw deck and deal any number of cards to each of their opponents until each player’s hand has a minimum of five cards. The dealer then determines the direction in which the Chronos card should be placed. The topmost card on the discard pile will show a red or blue arrow. Depending on the color of the arrow shown, the dealer now flips the Chronos card to match. This indicates on what end of the players’ Timeline row Event cards must be played for the current round.

Back to the Future

The basic game thematically focuses on the players attempting to get back to their original time using a wonky time-machine. This game variant thematically suggests that time-travel is now a less risky business, which also means people are taking advantage of it as well as trying to protect it. Players will be taking on the role of a time thief or a time agent, working together with other players who have the same role. The gameplay is similar (Item cards are now added and are used to avoid disasters on the timeline), but the game itself focuses more on leveraging the opponent’s timeline to outpace each other. Players are eliminated when they have four or fewer cards in their hand at the start of the game round. The game ends when the eighth Event card is played to the Timeline row. Time agents win if they eliminate or stop the time thieves and the time thieves win if they have collected four or more cards with a “Chip” icon. 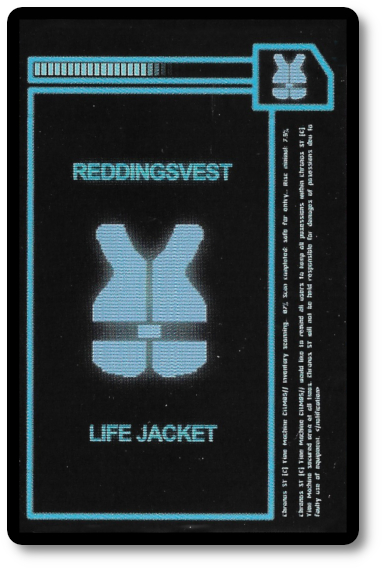 There is also a solitaire version of the game, but the instructions on how to play are not included with the game box or rules. As such, we did not play this game variant.

To learn more about Lost in Time, visit the game’s web page.

The Child Geeks enjoyed the game, finding it fun to try to skunk each other using the Disaster and VIP cards, but more importantly, leveraging them to move ever closer to their home time. According to one Child Geek, “I like how simple the game is to learn and how much fun it is to play. I wish I could visit some of these events.” Another Child Geek said, “The game is pretty good. Easy to learn and fun to play.” All the Child Geeks found something they enjoyed about the game, but none of the Child Geeks were overly thrilled by it. That is to say, they played the game, had a good time, and didn’t talk much about it afterward. Still, the game was enjoyed and all the Child Geeks voted to approve it, giving it their collective “thumbs-up”.

The Parent Geeks were similar to the Child Geeks but were able to communicate their thoughts in a deeper fashion. According to one Parent Geek, “The game is well designed, but not overly interesting. You just played cards in a logical number sequence if you can. The player interaction is limited, but enough to keep everyone involved. I found the game variant to be more interesting and I think they should have spent more time focusing on that type of game rather than the basic version we first learned.” Another Parent Geek said, “Skip the basic version and go right to playing time agents and thieves. Much better game and entertaining concept. However, I think the basic game definitely has its place with the family, as it allows me to play the game with my kids and discuss history at the same time. Pretty good.” All the Parent Geeks voted to approve Lost in Time, citing that the game was worth spending time with.

The Gamer Geeks were not overly impressed. According to one Gamer Geek, “Time travel games have been done before and there are better ones out there. I don’t think this is a particularly interesting game, but I don’t think it is a bad one, either. I’d suggest it to folks who were casual gamers and have not yet had any experience with time travel-themed games. Otherwise, I don’t think the game is overly rememberable or remarkable.” Another Gamer Geek said, “A simple game with a simple concent that simply didn’t interest me. The game variant with the time agents and thieves was a much better game, but it was still a bit clunky since it was built on the basic gameplay. A good entry game for new players, but not something an elitist like myself would care to play again.” The Gamer Geeks gave it some thought and voted to reject Lost in Time, ensuring the game was lost to them for eternity.

Lost in Time is simple if you play the basic game. Simple, but entertaining with the right crowd. And by “right crowd” I mean kids. The game play is straightforward, decisions to be made or important but not difficult, and the speed of the game is kept at a pretty good pace. Where the game really shines – to an extent – is the game variant that focuses on semi-cooperative game play. Here players get to make more decisions that have a harder impact on the game’s outcome. For those who get a chance to play Lost in Time, I suggest you skip the basic game altogether and jump right into the game variant. However, you need to learn how to play the basic game first. This is unavoidable, as the game variant builds upon the basics.

Overall, I enjoyed Lost in Time, but like the Game Geeks, I too found the game to be mediocre. I’ve played other time-traveling games where the gameplay felt more important, meaning I spent more time considering each of my turns rather than just going through the motions. I didn’t get that feeling during my games with Lost in Time. By no means did I find the game dull either, but nor was I thrilled by it. I’d say the game itself is well designed and the gameplay is solid, but it never struck a chord with me. Give it a go and see if this time-traveling game is worth exploring.