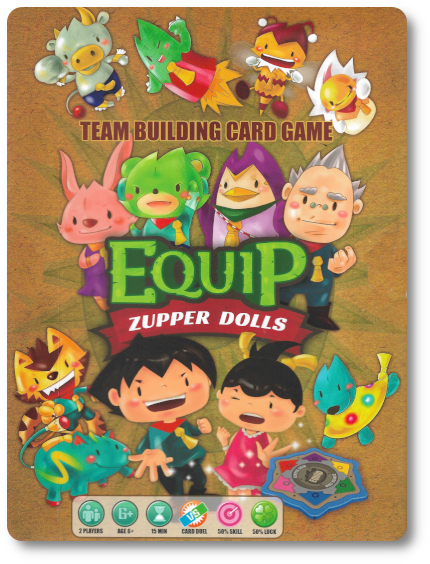 American cultural anthropologist, Margaret Mead, said “I do not believe in using women in combat, because females are too fierce.” But, alas, Ms. Mead was not aware of the awesome power of dolls. In this game, players take on the responsibility of training animated dolls, brought to life just in time to fight not only each other but eventually aliens. Maybe. The backstory on this game is pretty confusing. Regardless! Dolls! Battles! Go get’em, Teddy!

Equip: Zupper Dolls, designed by Sum Chan, Philip Chan, and to be published by Pisum Game, will reportedly be comprised of 14 Hero cards, 10 Equip cards, 11 Mix Hero cards, 12 Special cards, one Coin token, one play mat, one Backer card, one Zupper Shop box, one custom cylinder six-sided die, four Battle cards, one Cursor token, two Player cards, and an assortment of Game Ticket tokens which is the game’s currency. As this is a review of a pre-published game, I cannot comment on the game component quality. However, if the final product is anything similar to the demo copy we were provided, you are in for a treat. Components are bright and durable. The artwork, if what we were provided will be the final product, is stylized and cartoonish. Adorable, really.

Get Up, Teddy! Time to Fight!

To set up the game, first place the player mat and Backer card in the middle of the playing area and within reach of both players.

Fourth, give each player a player mat. Place the remaining tokens and the die to one side where they can be easily reached when needed.

That’s it for the game set up. When completed, your playing area should look similar to the following image. 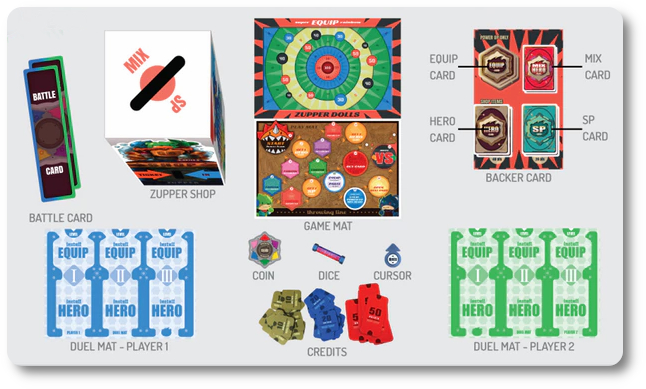 Time to go fight invading alien forces with magically brought to life dolls. Again, maybe. There were no aliens in our game…

Kick Him in the Jaw, Teddy!

Equip: Zupper Dolls is played in turns. The actions for each turn are described on the play mat portion that looks a bit like a map. Each of the fifteen stops on that map is summarized here in the order in which they are encountered. Use the Cursor marker to help keep track of which zone the players are currently acting on. 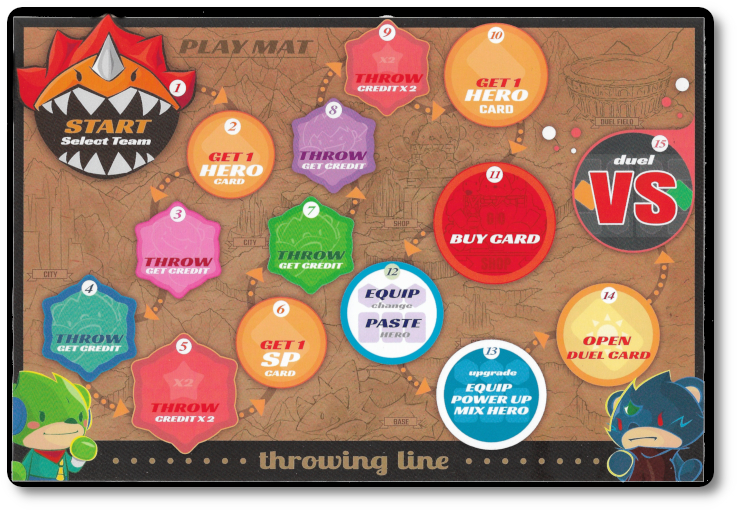 Zone Two: Get One Hero

The players draw one Hero card. Hero cards represent the dolls and the kids who own them who are fighting the aliens. The Hero card is placed face-up in front of the player at this time. It will later be added to the Player mat. 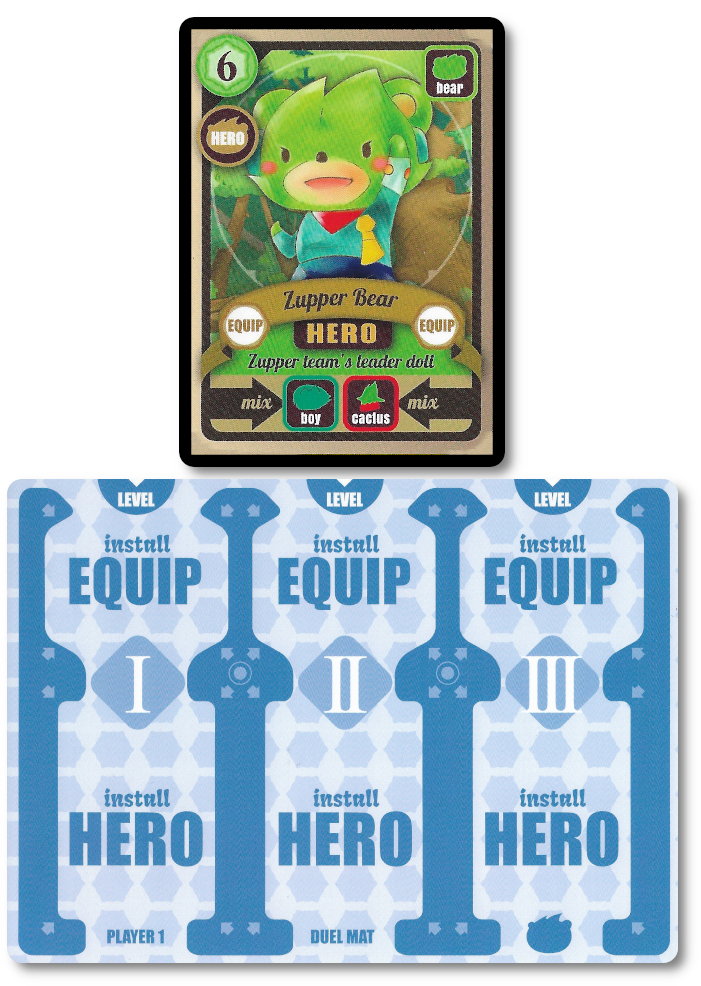 Players take turns tossing the Coin token to the mat. Where the Coin lands is the number of credits the player will get. The player also rolls the die which will result in a color. The player matches the color of the arrows to the closets number and collects that number of similar colored Credits. This step is repeated three times. On the third time, the players collect double of whatever is rolled. 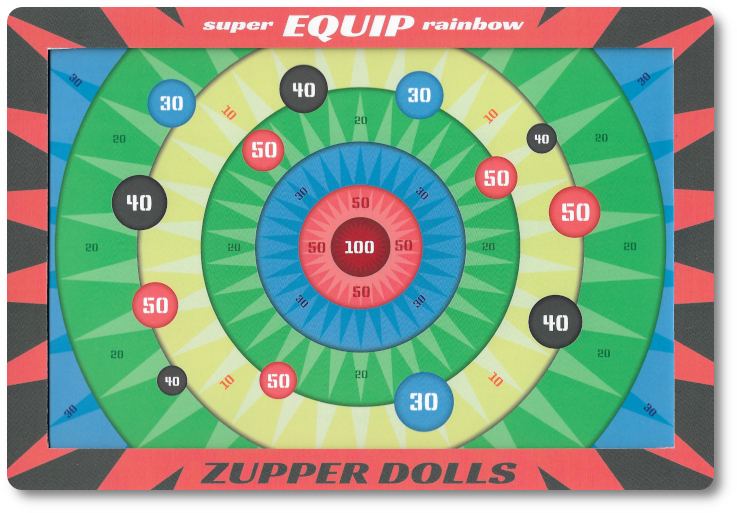 Zone Six: Get One SP Card

Each player in turn now draws one SP card. SP cards are special items that give the heroes a boost. The card goes face-up in front of the player at this time. 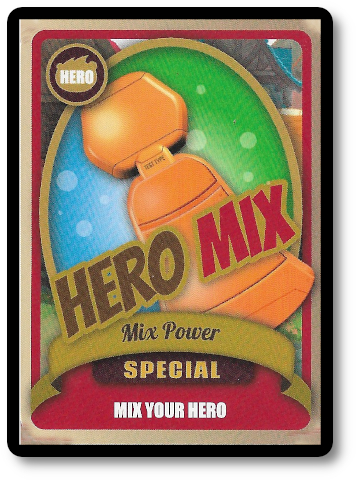 These actions are duplicates of zones three, four, and five.

Zone Ten: Get One Hero

This is a duplicate of zone two.

The players now spend their hard-earned credits to purchase cards, with a maximum of one additional Hero card (40 credits) or two SP cards (20 credits apiece) at a time. Credits spent are put in the Zupper Shop box. Players trade off until both are out of credits or both decide to stop. Like the previously acquired cards, they go in front of the player at this time.

Players now select their acquired Hero cards. A maximum of three Hero cards can be placed on the player’s mat. SP cards can be used as “attachments” to the individual Hero cards. Depending on the card, Equip cards should also be taken at this time and placed on the player’s mat. Combined cards that result in boosts and such are placed back in the Zupper Shop, essentially knocking them out of the game. Any Equip cards played start at “Level 1”

If the player has acquired a few levels on their Hero cards it will result in the card having an additional ability that is now resolved. Players can also mix Hero cards together, combining other cards. Even if the card provides a powerup, however, the player will have to roll to determine if they get it.

Both players now face their player mats towards the other and place a random Battle card in between them.

Finally, we are ready to battle! The top-most Battle card is flipped over and placed. The Battle card shows colored lines that connect one player’s Hero with another. These lines indicate which Heroes will be fighting each other. Battles are determined by counting the attack values of the cards, with the higher winning.

And that’s the game. The player who wins the most battles wins the game.

To learn more about Equip: Zupper Dolls, visit the game’s website or the Kickstarter campaign.

The Child Geeks enjoyed themselves but found the experience to be rather busy for little in the way of reward. According to one Child Geek, “I spent a lot of time building up my hero and the final battle wasn’t something I could control. It felt like I did all the work for nothing.” Another Child Geek said, “I liked how you had chances to buy cards and make your heroes or dolls or whatever they are really powerful, but it felt like it took longer than expected.” In truth, the game takes very little time, but since there are so many steps, it can feel like a bit of a journey that ends abruptly with little to show for it. Which is exactly how the Child Geeks felt. A few of them liked the game, but not enough to award the game their endorsement. What we can state is that our younger Child Geeks (closer to the targeted audience age range) enjoyed it, while the older and more experienced Child Geeks did not.

The Parent Geeks didn’t care for the game. According to one Parent Geek, “This game felt like a mess. The rules are not great, you repeat multiple steps multiple times with random outcomes which you have to then track on a board. It took time and energy that never felt like it should take any time or energy. I played it with my kids and we didn’t want to play it again.” Another Parent Geek said, “I think this would be a fun game for kids or for parents who like games a lot and want their kids to play it too, but I don’t think this game is for me or mine.” When all the votes were in, the Parents Geeks rejected Equip, finding the game to be too heavy with the actions and not enough with the results.

The Gamer Geeks really disliked this game. According to one Gamer Geek, “This game is a hot mess. Random outcomes after forcing the player to think about making choices. Absolutely horrible. And why on earth are we repeating the same steps multiple times? Why can’t I just roll for my money once? There are levels of difficulty and arbitrary design choices that simply make no sense.” Another Gamer Geek said, “Nope. Not a good game. All glitz and glam with nothing to show for it. Nice production, but it has no soul or any fun value whatsoever. Total miss in my book.” When all the votes were in, the Gamer Geeks rejected Equip.

I am in total agreement with our groups regarding this game. Equip: Zupper Dolls didn’t feel tight, was repetitive, came to a close too quickly, and felt like too much work for very little in the way of reward. I kept going back to the game attempting to uncover it’s hidden mysteries, constantly considering the fact that I might have missed something. I don’t think I did. After the many games I have played and observed, this game is similar to those kiddy rides that look like cars with a steering wheel that give the rider the illusion they are under control. In reality, the car is tethered to a track. Doesn’t matter what the rider wants to do, how hard they press on the gas peddle or how quickly they turn the wheel, the ride remains fixed. And that’s Equip: Zupper Dolls in a nutshell. A game designed to play itself in front of a player getting them to feel like they are playing a game when in reality they are completing a checklist.

There is room on gaming tables around the world for such an experience, but I’d argue it’s reserved for those who need a game to make the choices for them, offering them an opportunity to choose a direction but with no significant impact to the path. A great way to get into the gaming hobby, providing “baby steps” that hold the hand of the player until such time they are ready to move on to more complicated games. If you are looking for a game to start your hobby, you should consider Equip: Zupper Dolls, especially if you have little Child Geeks who want to join you at the family gaming table.