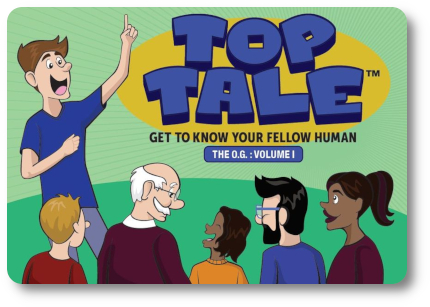 American spiritual teacher, psychologist, and author, Ram Dass, said, “Each of us finds his unique vehicle for sharing with others his bit of wisdom.” Humans learn by observing and listening. There was a time when everything you knew was passed down to you verbally or through physical instruction. This was later enhanced with books that captured ideas that could be shared again and again. Now we have the internet that allows us to share pretty much everything. And yet, we still yearn for the quiet moments where we can just sit and talk. In this game, taking a moment to pause, share, and laugh is the player’s only goal.

Top Tale, designed by Peter A Seiler and to be published by Yub Nub Games, will reportedly be comprised of 108 Topic cards. Eight of these cards are intentionally left blank, allowing the owner of the game to create their own topics. As this is a review of a prepublished game, I am unable to comment on the game component quality.

Preparing for a Good Conversation

To setup the game, first shuffle the Topic cards.

Second, place the cards face-down in an area where they are easy to reach. This is the Topic draw deck for the duration of the game.

Third, as a group, decide if points will be awarded or not. It might also be helpful to determine how many points earned by a single player ends the game.

That’s it for the game setup. Decide who will go first and begin.

Top Tale is played in rounds and turns with no set number of rounds per game by default. On a player’s turn, they will draw a Topic card from the draw deck and read it out loud. Each Topic card has a topic and a caption. The topic is what the players will be discussing, with the caption being provided as something of an ice breaker. 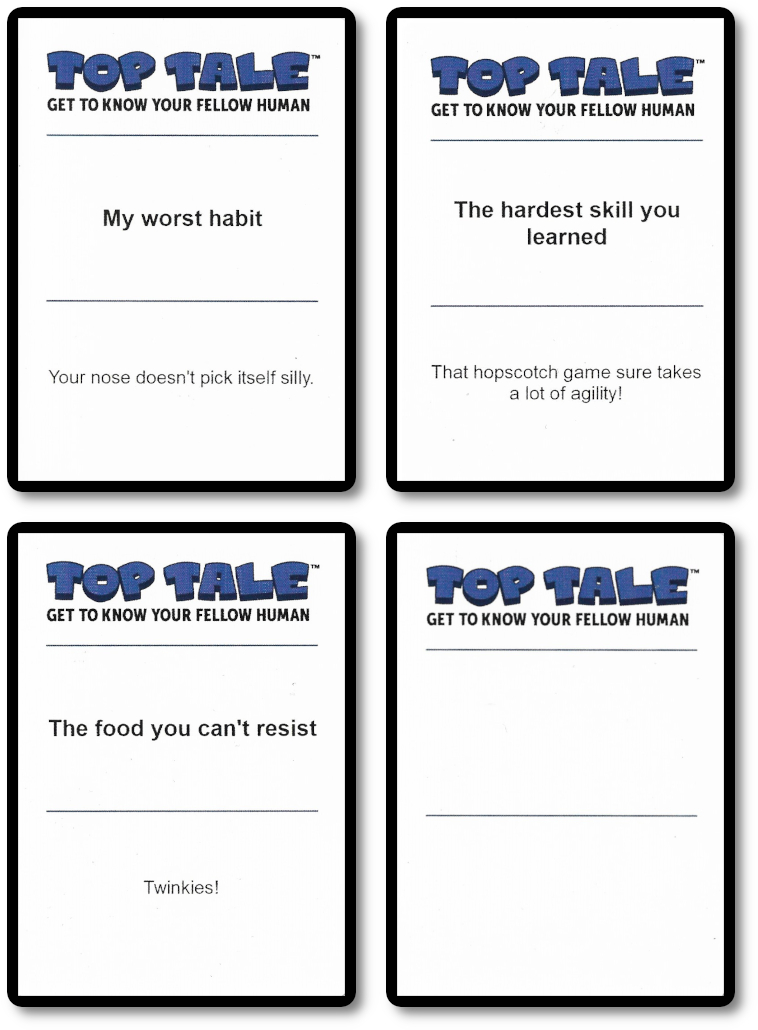 The player who drew the card now provides their answer based on the topic provided. There is no limit to the amount of time a person can speak or any suggestion on how colorful their response should be.

After the player who drew the card provides their answer, the next player in turn order sequence now provides their response and so on until all participants in the game have had a chance to share.

If the game is being played for points, all players now vote for their favorite response. Players cannot vote for themselves. The player who wins the most votes is awarded the Topic card, which will remain in their possession for the duration of the game. If there is a tie, a new Topic card is drawn, and the players who are in the tie now respond to the card. Another vote is taken with the winner being awarded the original Topic card used in the round and the Topic card used as the tiebreaker.

Voting for a “favorite” is optional and can be skipped. In such a case, simply discard the used Topic card and continue.

Ending and Winning the Game

As already noted, keeping score is optional in Top Tale. The game is focused more on conversation and sharing, not scoring points.

Players are also welcome to establish a time-limit for responses, using their phone or another device to keep track of the time left. Although most answers to the Topics per our observation took less than a minute and the responses are interesting, making time limits an unnecessary burden and distraction.

Finally, players are meant to respond to each Topic card, which does not probe into uncomfortable or controversial territory. Nonetheless, a player is welcome to pass if they do not want to provide their answer. Doing so removes them from the gameplay for the round, including any voting.

To learn more about Top Tale, visit the game’s website or visit the Kickstarter campaign.

The Child Geeks enjoyed the game and the opportunity to share their stories with an audience. According to one Child Geek, “I liked how we shared stories of favorite and funny moments. Can’t make a lot of new summer memories right now, so reliving old ones was the next best thing.” A few of the Child Geeks were shy at first but eventually started to play once they saw how much fun everyone was having. It also helped that there was a great deal of encouragement from peers and parents, helping them get over any anxiety they might have been feeling. As one Child Geek put it, “It’s fun to share, and I like hearing stories from my parents.” When the final votes were in, the Child Geeks gave Top Tale their top approval.

The Parent Geeks also enjoyed Top Tale, finding it to be a game they could easily play during a time of social distancing and limited gatherings. It was also found to be a game they could quickly get everyone to play. According to one Parent Geek, “Games like this are light, super casual, but also insightful. When I ask my kids how their day was, they often just grunt. During this game, I had to remind them to allow others to have a turn to talk!” Another Parent Geek said, “We play a lot of games at my house that cover all the themes you can imagine. There is always room in any collection for a game like this that encourages nothing more of its players than their time, attention, and creativity in a very casual atmosphere.” When the final Topic card was awarded, the Parent Geeks found Top Tale to be the winner.

The Gamer Geeks didn’t much care for the game, finding the gameplay to be neither strategic nor tactical. Which, honestly, none of the gaming elitists were surprised about. According to one Gamer Geek, “Not a game in the classic sense, but more of an exercise to get to know your opponents. Useful for an ice breaker at large or small gatherings with a few beers, I imagine.” Another Gamer Geek said, “A good game to bring to a BBQ or to keep at the family cabin. It is even easy to bring on camping trips. Not a game I would play with my friends but certainly something I can see families enjoying.” The Gamer Geeks gave Top Tale their time, but not their approval.

Top Tale provides its participants with an opportunity to share a good laugh and memory. While points are earned, everyone in Top Tale is a winner. You learn a good deal about the people around you who are playing, which only increases how interesting (in most cases) the people in your lives are. There are also several benefits to this type of game. Specifically, an opportunity to get to know everyone in your circle better, learning more about someone new, and getting shy people to open up.

This game is going to be best played with families. Especially families with kids. During this time in our history with the virus outbreak, civil unrest, and a world seemingly turned upside down; there is a lot going on that is hard to talk about. This is true for adults and for children. Top Tale allows players to sit down and open up. Not in a manner directed by a therapist, although I did find the game to be therapeutic. Sharing what is on your mind, reliving happy memories, and engaging others in conversation just feels good. We are, after all, social creatures.

If you are looking for a casual game, where sharing and learning is the only intent, and everyone who plays walks away a winner, do try Top Tale. You might find it creates new stories for you and yours that you’ll want to tell again and again.